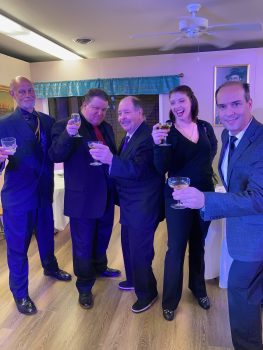 Finally, there is a glimmer of hope after what has been a year filled with adversity for us all. Live, in-person theatre has finally made its triumphant return to Southern Maryland! This past Thursday night I was invited to attend a dress rehearsal of New Direction Community Theater’s first show of their 2021 season at the Long Beach Community Center — a comedy entitled “Breaking Legs.” I can’t even begin to express in words how wonderful it felt to be sitting in a theater without a mask watching actors perform live and in-person. This company is currently following the CDC’s guidance on mask wearing. The effervescent sense of normalcy was quite overwhelming and, if I’m being completely honest, almost euphoric for a theatre-lover like me.

Harmony is the word that immediately comes to mind when thinking of how well this cast worked together and played off of each other’s energy.

“Breaking Legs” is a comedy written in the 1990s that tells the story of a professor and hopeful playwright seeking funding for his upcoming play. After reaching out to many people in hopes of finding a financial backer, he finally lands on the family of a former student. The play is about murder and his prospective backers just happen to be, theoretically speaking, part of the Italian mafia in New England. Add in a dash of conflicted romance between the professor and the daughter of the Italian mafiosos, along with some “suspicious” deaths, and you’ve got yourself a story ripe for comedic moments.

I’ll begin by saying that I was absolutely floored by how well this play came together after speaking with director Rick Thompson. Due to Covid related restrictions, this cast and crew’s rehearsal began over Zoom calls and later graduated into the director’s own home before finally moving into their current location. Watching the blocking and cast’s chemistry was made all the more impressive knowing the backstory of how this production came to be. Thompson has my deepest admiration for being able to pull off such an incredible feat during such a challenging time.

The cast is comprised of only six actors, but they do an absolutely fantastic job of really filling out the stage and story with their performances. Harmony is the word that immediately comes to mind when thinking of how well this cast worked together and played off of each other’s energy. Their collective enthusiasm was both palpable and infectious. Everything from the believability of the three mafiosos (Sid Curl as Lou Graziano, David M. Thomas as Mike Francisco, and William Righter as Tino De Felice) to the undeniable chemistry between the professor and daughter (Justin McCright and Monica Jones, respectively) truly had me immersed in the production.

Two actors in particular stood out  for their exceptional performances — Justin McCright as Terence O’Keefe and Robert Sebo as Frankie Salvucci. McCright possesses unbelievably precise physical comedic timing. This was especially evident during the final sequence of Act 1 in which he makes a mad scramble after coming to a realization about the nature of his financial partners. The moment had me laughing so hard that I almost began snorting. Sebo was completely in tune with the scene and had on-point reactions to the rather less than fortuitous circumstances n which his character Frankie finds himself. It was truly refreshing to see how well his physicality matched the dialogue.

I would recommend this show to anyone in Southern Maryland (and beyond) who is at last ready to experience live theater again. However, do be aware that this show is more an adult/older teenager geared show given the nature of some of its content. With that in mind, if you find yourself needing a laugh (don’t we all?), then this is the show you’ve been searching for.

Advisory: 16+ for language and sexual innuendo. This play also contains a joke pertaining to a person’s body weight and an ostomy related aside.