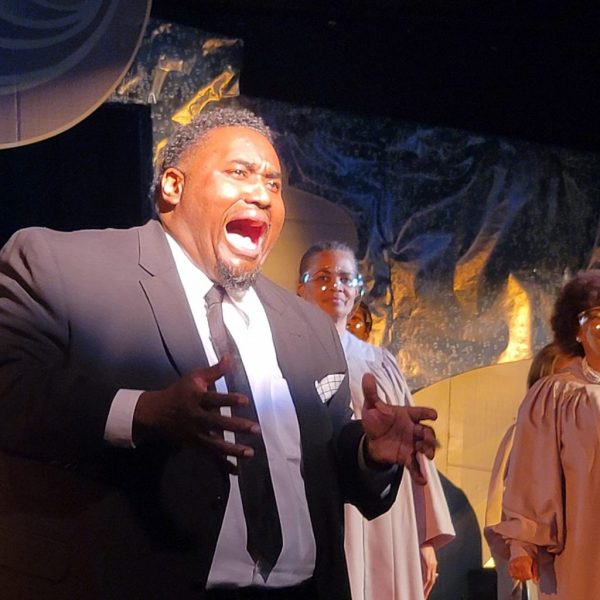 Fans of gospel music will immediately recognize the title of Arena Players’ current offering, “Cleveland,” not as reference to a city, but as reference to its central character. The Reverend James Cleveland (1931-1991) was gospel royalty; first, as an arranger and composer, and later as a recording vocalist. He developed the early talents of countless singers, including some who crossed over to secular pop music (Aretha Franklin is the most notable), but resisted all temptation to do so himself. Though his career and life were cut short, Cleveland remains alongside Mahalia Jackson atop gospel music’s Mount Rushmore.

Tamba Giles commands a stage just by walking onto it…one wishes that the show could continue.

America’s longest-active Black theater company, Arena Players, continues its 66th season with a new gospel revue in which the Rev. Cleveland is brought to life in the person of actor Tamba Giles. Audiences will remember Giles’ award-winning portrayal of the late Luther Vandross in the 2016 musical “Luther.” That performance set a very high bar for Giles to reach in this latest biographical performance, and as “Cleveland” he doesn’t disappoint. Neither does the church-choir-as-chorus — over a dozen strong singers fill the intimate playhouse with powerful sound. It’s the sound, in fact, that makes this production such a joy. When the performers’ voices are untethered by amplification, their natural sound is so good that listeners can’t discern any impact of the clear plastic face shields being worn. Music Director Grafton Gray keeps everyone on point, and his conducting is a joy to watch in itself. Unfortunately, the quality of the production suffers a little when soloists switch to using the wireless microphones that are stationed on each side of the stage. An opening night technical issue badly distorted the amplified singing. We trust that the problem has since been fixed.

Company member Randolph Smith conceived “Cleveland” as a presentation of two contrasting parts. The first act contains a bit of story along with the songs, as a church choir gathers in anticipation of the reverend Cleveland’s arrival for a gospel workshop. They pass the time giving testimony and swapping solos. Hats off to Tia Roundtree in particular, whose “Let’s Go Back to the Old Landmark” and “We’ve Come This Far by Faith” are show-stoppers. Gerard Talley gets backup from his choir-mates and soars on “Lord Help Me to Hold Out,” a song written by Cleveland. Then, the man of the hour appears. Tamba Giles commands a stage just by walking onto it, and his entrance as Cleveland is perfectly met by the star-struck choir. Right away, he launches into a number which may surprise those unfamiliar with the Reverend’s work. The Barry Manilow hit “I Write the Songs” was adapted by Cleveland in the 1970s, with new lyrics to highlight his gospel catalog. “Jesus is the Best Thing,” based on “You’re the Best Thing that Ever Happened to Me” by Gladys Knight and the Pips, also makes an appearance, with “Peace Be Still” between them. A final highlight of act one finds Giles behind the keyboard for Khadijah Hameen’s rousing delivery of “Can’t Nobody Do Me Like Jesus.” The shorter, second act is strictly business, with song after song showcasing more great vocal work. Giles does the heavy lifting, with a well-earned break in the middle as Vanessa Stewart blows the roof off the theater a capella with “The Lord’s Prayer.” It’s a heck of a workload, and when curtain call comes around one wishes that the show could continue.

Running Time: 113 minutes with one intermission.