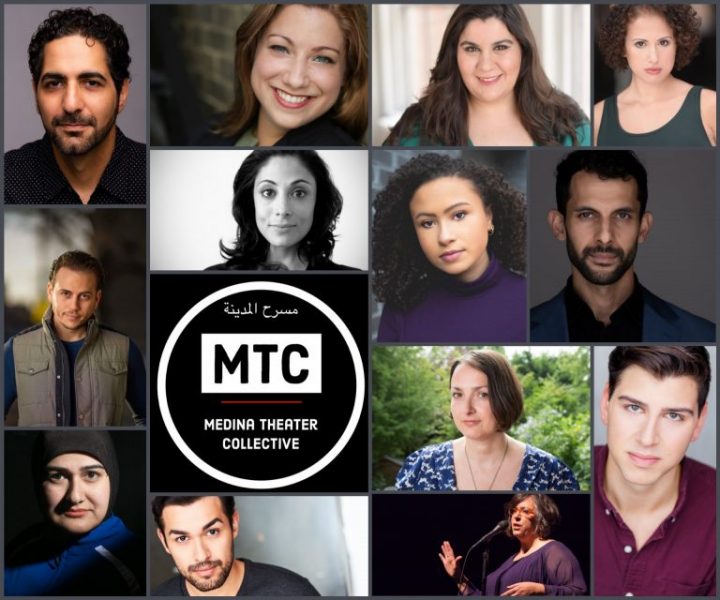 “Scenes From 73* Years” was written by Hannah Khalil and produced by the Baltimore Theatre Project in partnership with Medina Theater Collective. Co-directed by Najla Said and Rohina Malikis, it is a heartbreaking, gut-wrenching glimpse into life for Palestinians living under Israeli occupation in the West Bank and Gaza Strip.

You will not walk away unmoved, and will hopefully come out on the other side with a desire to take positive actions for love, justice, and equality.

Performed virtually due to Covid precautions, the play works just as well, if not even better, than an in-person performance. An off-screen narrator sets the stage for each scene, and then we see each actor on their Zoom screen, all of the actors for the scene presented simultaneously.

The focus on the headshots for the actors, rather than their whole bodies, draws emphasis to their facial expressions. I was especially haunted by the actors’ eyes in many of the segments because I was up close and personal in a way that the theatre setting would not have allowed, and therefore taken on a deeper emotional journey as each actor in this exquisite ensemble cast gave their all playing multiple characters throughout the play.

Playwright Khalil does an excellent job portraying the collective messiness of human morality in her collection of vignettes ranging from a bridal shower picnic, to basic first aid training (for Hamas, as it turns out), to students protesting, to an easy camaraderie between an Israeli soldier and Palestinian shopkeeper, to endless waits at closed checkpoints, to students’ and young adults’ frustrations with occupied life, and to their elders’ differing values.

An example of the mixed moral jumble is found in the thread of a fairly friendly Israeli soldier (Bassam Abdelfattah) who enjoys drinking tea with the kind Palestinian shopkeeper (Noor Hamdi) whose shop is next to his parked tank. We see how the solider has the sensitivity to leave the shop when a Palestinian customer (Arash Fakhrabadi) comes in, obviously seeking a private conversation with the shopkeeper.

In another segment, the same soldier is respectful to a Palestinian sex worker (Amira Danan), repeatedly making sure that she is comfortable with his requests and generously compensating her. But later, he loses his temper when she breaks the mood because of her concern for his health during their encounter. Adding to the picture of his greyer morality, in a fender bender with a fellow Israeli driver (Chris Khoshaba), the soldier drives off without exchanging information.

While these incidents may show him to sometimes be a jerk, the most chilling moment comes when he and fellow Israeli soldiers are legally* (*due to implied authorization from the Israeli government) raiding a hastily vacated Palestinian home in Jersusalem, with the inference that its occupants were evicted.

The soldiers divvy up the home goods with excitement, and sometimes even with exquisite care for the items they are looting. They do this with absolutely zero compassion or reflection towards the homeowners whose goods they are casually stealing (because let’s be honest, a government decree doesn’t make theft any less a theft, no matter how red-stamped and sanctioned it is.)

Yet, this is the same soldier who strikes up a friendly rapport with the Palestinian shopkeeper and (mostly) respects the Palestinian sex worker. The moral disconnect between his kindness to the people he sees right in front of him, to his joyful participation in systemic acts of abuse to the same people when he’s not confronted with their faces, is difficult to watch — and it should be!

In another segment, I felt palpable fear and tension every time the soldiers interrupted the three women’s picnic (played by Ruba Mansouri, Annalise Raziq, and Najat Arkadan Washington), worried for what might happen to them as they tried to enjoy a simple outdoor get-together. As a woman, I think it’s especially frightening to be confronted with abusive male power. When that power comes in the form of gun-wielding soldiers, I know that I would have wanted to flee the scene and hide. This made Najat Arkadan Washington’s courageous defiance all the more powerful.

“Scenes From 73* Years” left me holding handfuls of sadness and an ache in my heart for those suffering in the Occupied Palestinian Territories. Additionally, as a part-Jewish woman myself, I can’t help but feel disgust and anger that the geographical nation of Israel, created as a sanctuary for my people, has, in so many ways, become the monster we fear.

It’s not hard at all to draw a parallel from our past to the Palestinians’ present when we see Israel evicting residents and looting their homes, shuttering and destroying their businesses, forcibly relocating an ethnic group of people (sometimes to ghettos), all amidst acts of cold-blooded, unprovoked murder, harassment simply for existing, and endless legal red tape and policies that only apply to a certain group of people.

Torah says “You shall not follow the majority for evil (Ex. 23:2),” so I hope that more of my Jewish brothers and sisters will raise our voices for true justice for our Palestinian neighbors who Israel continues to afflict. Truly, everyone of every culture should watch “Scenes From 73* Years.” You will not walk away unmoved, and will hopefully come out on the other side with a desire to take positive actions for love, justice, and equality.

Parental Advisory: One vignette involves sexual content — though not overt, it is not suitable for children.

“Scenes from 73* Years” is available to stream and been EXTENDED through July 11, 2021. It is produced by the Baltimore Theatre Project in partnership with Medina Theater Collective. For more information and tickets, click here.