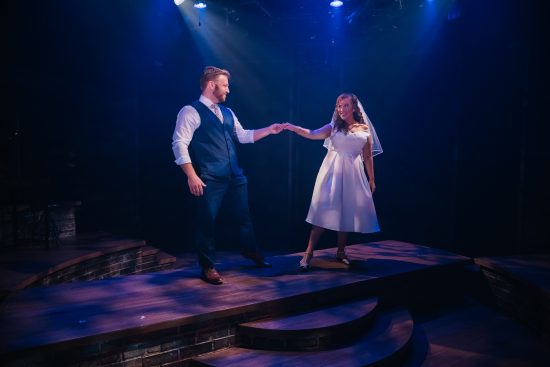 I will confess that I have been utterly enraptured by “The Last Five Years” source material — as written semi-autobiographically by the prolific Jason Robert Brown — for almost the entirety of a decade. If a person were to add up the hours that I’ve spent critically listening to each track and contemplating the greater interconnectedness of the music and story, I am sure that it would easily fill weeks, if not months of time. Understandably, when I was offered the chance to (finally) view this show live (albeit virtually), I jumped at it. Prior to this point in time, I had only seen the 2015 movie adaptation and listened to the various iterations of the soundtrack. I am delighted to report that at last being able to see a full, live staging of the show, it did not disappoint.

Although I already thought I knew the source material like the back of my hand, I found myself realizing even more layers to the story than I had previously discovered. For me, this is the hallmark of a truly capable production…beautifully orchestrated…

The story of this musical depicts a five-year long relationship between two well-meaning, but also intricately flawed human beings named Jamie Wellerstein and Cathy Hiatt. What sets this musical apart from others with similar concepts is that each of the characters tells their side of the story, but in a different chronological order. Cathy begins her side of the story at the end of their relationship and works her way backwards in time, while Jamie recounts his starting from the beginning of their union and concludes with their relationship’s ultimate demise. Within the score, Brown did a spectacular job of utilizing specific melodies and lyrics to intertwine different threads throughout the musical in a way that makes the entire production feel epically full bodied and a thorough examination of a complex relationship between two even more complicated individuals.

At the helm of Constellation Theatre Company’s virtual production of this show is director, Kathryn Chase Bryer, and musical director, Marika Countouris. Bryer’s blocking of the show was precisely calculated in order to weave together the two accounts of Cathy and Jamie’s relationship. They felt like ships passing through the night, always so close to connecting, but never succeeding except for three brief interludes during the show. Although I already thought I knew the source material like the back of my hand, I found myself realizing even more layers to the story than I had previously discovered. For me, this is the hallmark of a truly capable production. Countouris did a beautiful job with the music by adding a rich fullness to each song that only sought to enhance and compliment Bryer’s work.

A.J. Guban’s scenic and lighting design and Gordon Nimmo-Smith’s sound design assisted in further pulling me into the story. I really enjoyed the way in which Guban methodically connected and disconnected the three-piece stage from itself in order further convey the story’s trajectory at different moments throughout the production. Strategic use of the stage’s turntable also helped to convey the passage of time between the two characters. Nimmo-Smith’s sound levels were flawless. The music perfectly blended in with the actors’ vocals to the point where the live singing almost sounded prerecorded because of how polished everything was. I’ve seen nationally televised shows with far less audio mixing coherency.

The crux of this production truly rested on the capable shoulders of Adelina Mitchell as Cathy Hiatt and Alex Stone as Jamie Wellerstein. If even one of these characters had been poorly cast, I am sure this show would have certainly imploded. That being said, I believe that these two actors portrayed two of the most complex characters in all of theatre with absolute clarity and enthralling nuance. Mitchell intriguingly interprets Cathy has as a woman who exudes self-assuredness in every measure, but also feels deeply, at times to her own detriment. Stone plays Jamie artfully with a measured animation and energy, but also a reserved subtleness is some of his line delivery. The two’s performances interweave with each other with a palpable chemistry that happily broke my heart every moment that they were on stage together.

Beyond a shadow of a doubt, I would recommend seeing this beautifully orchestrated production of what is already a brutally honest story that I believe each and every person can relate to in some capacity or another. Jason Robert Brown originally sought to tell a gut-wrenching tale of love and loss and Constellation Theatre Company’s work with the source material is only helping to further convey Brown’s original intent. Seriously, do yourself a favor and spend the money to buy a ticket in order to behold such a beautiful production as this one. I promise you will not regret it.

Run time: Approximately 1 hour and 30 minutes with no intermission.

Content Advisory: Recommended for 15+ due to strong language and sexual innuendo.

“The Last Five Years,” presented by Constellation Theatre Company, will begin streaming through video on demand on June 22 – July 11, 2021. For more information on the show and to purchase tickets, please visit their website here.