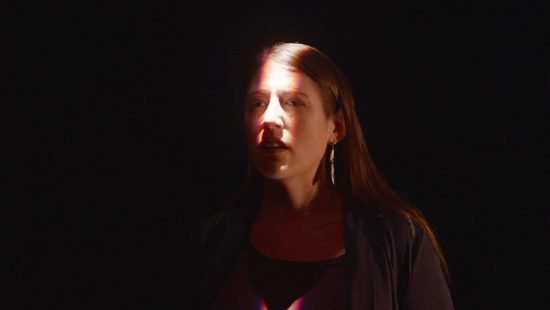 Madeline Sayet’s ‘Where We Belong’ is an elegy for so very much — the voices lost to colonialism, the lives lost through the insanity of war, the languages stamped out, and the end of a sustainable world possibly. It’s a journey of how we ended up at this moment  — and why losing the voices, the lives, and the languages may have doomed us.

‘Where We Belong’ is glorious playwriting…Don’t miss this one.

It’s also lyrical and humorous — not a gallows-type of humor, but the absurdity that just exists when people interact, particularly people close to us. Underpinning everything is a cry to heaven and to the ground, rivers and seas, and every living thing: “I long for a world without sides.”

That line took my breath away, and encapsulated the piece for me. We may be grounded in our geography, but we live in one world — and it terrifies us.

Playwright, director, and actor Sayet has brought this story into existence from her own life. In 2015, the Mohegan artist went to England to pursue a PhD in Shakespeare. She had spent much of her previous years in school and extoling the virtues of Shakespeare and how he treated indigenous peoples in his stories, most notably “The Tempest.” But the fractures of Brexit and the divisiveness gripping the United States, particularly as regards colonialism and the unthinking way anybody “other” is perceived, caused her to rethink her goals, her beliefs, and her ancestry. She traces the history of her people from their first interactions with White settlers to the constant betrayals in the next four centuries. She also traces the damage that such blinding beliefs do to everyone.

Sayet is also a gifted actress. It is her story, but she brings us into her world of awakening so naturally that you willingly follow. Mei Ann Teo directs the piece with a grounded touch, made visible through the borders of dirt that meander across parts of the stage. Production designer Hao Bai keeps the staging simple in the extreme — dirt and the polished stage that seems almost like water under the lighting design that seems to hint at eternity.

“Where We Belong” is glorious playwriting. It’s an important story — thought-provoking, respectful, and alive. It  premiered at Shakespeare’s Globe in London in 2019 as part of Border Crossings’ ORIGINS Festival, the UK’s only large-scale multidisciplinary festival of Indigenous arts and culture. Here in its U.S. premiere, it is being featured as part of the International Festival of Arts & Ideas 2021 (available on-demand from www.artidea.org between June 24-27) and at Woolly Mammoth in partnership with Folger Shakespeare Library. Don’t miss this one.

Running Time: Approximately one hour and 18 minutes with no intermission.

“Where We Belong” runs through July 11, 2021. This production is being pre-recorded and presented virtually by Woolly Mammoth Theatre Company in association with Folger Shakespeare Library. For more information, please click here.