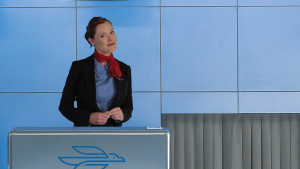 Kaitelyn Bauer Dieguez as Terry Mason, the flight attendant. A still from the virtual production.

One of the most beautiful things about theatre is its capability to educate us about how people who are different from us live. I know for myself that it can be incredibly effortless to sequester myself away into my own little world and never explore how other people live their lives. While comfortable, this only leads to a close-minded society in which its citizens only seek to serve their own self interests. That is why art is such a gift to behold. It has the ability to gently push us to challenge our own preconceived notions and become better for it. This past weekend I was privileged enough to get to see the musical “Working” as produced virtually by the Port Tobacco Players, which beautifully displayed this concept. This production was chosen in order to pay tribute to all of our nation’s invaluable essential workers during what has been challenging time for us all.

I really appreciated the realism that shooting on location for most of the sequences brought to the overall viewing experience of this piece. It’s always refreshing when art can reach out to the local community and include it in a production…It was enlightening and also entertaining.

“Working” does not have a central story, per say. Instead, the musical takes the audience through 26 different people’s perspectives on the jobs that they do. Their professions range anywhere from a delivery driver to a hedge fund manager. The musical was originally based on a novel by the same name that took interviews from people’s work experiences and compiled it into literary form. Some of the scenes are only monologues, while others contain a song along with the monologue. While researching this musical, it was interesting to see the different changes this work has gone through over the years. It originally premiered on Broadway in 1977. It was then given a 2012 update/revision to make it more relevant to our current times. Within the 2012 revision, there are two songs written by none other than Lin-Manuel Miranda (of the ubiquitous musical “Hamilton”). He wrote these long before he became a household name. All this to say that this musical, though written over 40 years ago, still felt immensely relevant for today’s audience.

Direction by Ben Simpson and technical direction by Jason Klonkowski were quite impressive considering the massive scope of this project. Each monologue/vignette took place at a different location around La Plata, Maryland. I really appreciated the realism that shooting on location for most of the sequences brought to the overall viewing experience of this piece. It’s always refreshing when art can reach out to the local community and include it in a production. I particularly enjoyed the camera work during the scene with a waitress/server named Delores Dante (earnestly played by Cassandra Murphy). It helped to further enhance an already engaging performance.

The actors in this production did a wonderful job of working as a cohesive unit during what could easily have come across as choppy since this production takes place in so many locations. In particular, I enjoyed the performances of Chant’l Martin as Candy Cottingham the fundraiser, Craig Hower as Tom Patrick the firefighter, and Nathan Daetwyler as Charlie Blossom the ex-newsroom assistant. Martin was absolutely believable as a wealthy, entitled person who routinely threw fundraisers. Everything from the cadence of her voice to how she held herself were spot on. Hower possessed an authentic genuineness that absolutely exuded from him as he recounted his character’s past experiences. Daetwyler was absurdly relatable as a frustrated, underappreciated ex-employee. He also gave off some serious Eduardo Saverin vibes (Andrew Garfield from the movie “The Social Network”) that had me enraptured by his performance.

Getting to sit in the comfort of my own home and see a virtual production that was produced less than a 20-minute drive away was an exciting experience as an audience member. I also found myself enthralled with each monologue/vignette and wondering what profession I was going hear about next. From start to finish, this production was an epic education in how different people live their lives. It was enlightening and also entertaining. I would recommend this show to anyone who wants to have a similar experience.

Running time: 1 hour and 40 minutes with one 5 minute intermission.

“Working” is currently streaming by Port Tobacco Players through June 11, 2021. For more information and to purchase tickets, please visit their website here.