Concert Review: Glen Boswick and the Sound of Swing Orchestra at Elation Brewery 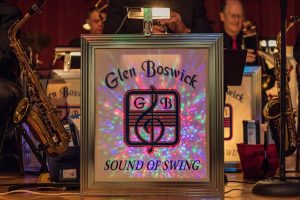 The Sound of Swing Orchestra is a 1940s-style big band which faithfully recreates swing-era staples such as Jimmie Lunceford’s “For Dancer’s Only,” Tommy Dorsey’s “Opus One” and “Marie,” and of course Glenn Miller’s Swing-era anthem, “In the Mood.” However, the band also plays in other styles as well, including numbers fom more recent decades.

With a jazzy effort to “swing into spring,” Glen Boswick and the Sound of Swing Orchestra broadcast recently from Elation Brewery in Norfolk, Virginia. The hour-long show, recorded on May 29, can be viewed on Facebook (see below). It also included a number of sweet staples from past eras — Jan Garber’s sentimental “My Dear,” Wayne King’s languid “The Waltz You Saved For Me,” and the lilting “Fascination Waltz,” recorded by Guy Lombardo and Lawrence Welk. Ballad and swing standards known more by name than association with particular swing bands included “The Best Things in life Are Free” and “Undecided.” Needless to say, everyone has an association of some sort with “Over the Rainbow,” known widely from MGM’s “The Wizard of Oz” and performed here in smooth and engaging style.

In addition to precision interplay of trumpets, trombones, saxophones, and percussion recreating classic swing and sweet tunes of the past, the performance also included a few numbers of more recent vintage as well. Of particular note was Carlos Santana’s “Smooth” as well as the similarly Latin-styled “Oye Como Va.” These songs showcased the band’s ability to embrace other musical styles than traditional swing.

Percussionist Boswick was ably assisted by the fabulous musicians of his orchestra. On the night of this show, Russ Robertson stood out for his Tommy Dorsey tributes with a lovely trombone solo on “I’m Getting Sentimental over You” and an effective vocal for “I’ll Never Smile Again,” a song pioneered by Frank Sinatra during his days as the Dorsey band’s vocalist.

Mr. Boswick, who took to music at an early age and has played instruments as diverse as tuba and bass, recently shared some of his own interesting background with MD Theatre Guide: “While in high school at age 17, I met an individual who was forming a local big band named Dick Crist. Dick and I formed this group, rehearsed it, molded it, shaped it, and soon was booking dates and playing gigs. When Dick Crist passed in 2004, the band, known for 20 years as Dick Crist and the Sounds of Swing, still had many contract engagements. Dick had left a personal note to me that he wished and wanted the band to carry on and for me to ‘assume the helm’ of the orchestra. We never slowed down and continue strong today. Today the band is playing a mix of styles but is still true to its roots of the American Popular Standards and the hits of the ‘Greatest Generation.’”

During the recent performance, there were many younger people present who were surprised that modern tunes they recognized could be adapted to the vintage, big band style. Others came out to hear the music in fidelity which is not possible with the recordings of the 1930s and 1940s, before the advent of high-fidelity recording. We therefore have a small quibble. While the musical performance of the show itself was stupendous, significant crowd noise can also be heard in the video recording. This aside, the concert is highly recommended and can be enjoyed on fellow bandleader Joe Enroughty’s Facebook here.