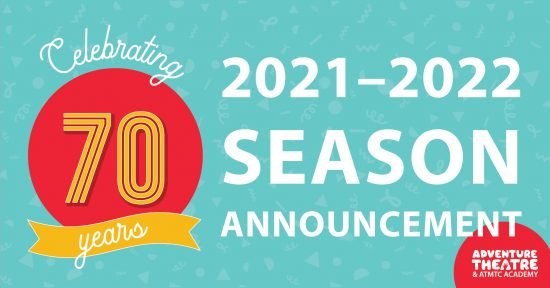 To kick off the 70th season, Adventure will host its digital Season Launch on Sunday, August 1, from 3 p.m. to 5 p.m. The show will feature production staff from this season’s shows to give a sneak peek of the upcoming productions. The season will be the first full season curated by Chil Kong, Adventure’s Artistic Director, who will also host Sunday’s preview.

This production season, Adventure will celebrate those bonds we least expect. The collection of shows uncovers secrets that connect family generations, make enemies into partners, helps cranky neighbors become best friends, and turns strangers into a community. Show tickets can be purchased here.

The Season Launch will feature discussions with the creative teams of the following shows:

“Acting is a passion of mine; it always has been,” Kong said. “Now I hope to inspire the next generation of theatre lovers, theatre goers, and theatre performers through our shows and the Academy. I’m thrilled to get the 70th season off the ground, and I hope you’ll join us.”

Adventure educates and inspires generations of performing artists and audiences with exceptional theatrical experiences; coming up on their 70th anniversary season, Adventure strives to provide quality performances with themes that are reflective of today’s times. More information about the shows can be found below. For more information about Adventure shows, Academy and classes, go to https://adventuretheatre-mtc.org/.

When a World Championship match is announced, Lupita anticipates seeing it until she discovers her ailing father is one of the wrestlers. With the help of a magical mask maker, Lupita secretly trains to take her father’s place.

In Uri and Ora Light the Menorah by Robyn Shrater Seemann, siblings Uri and Ora look forward to Chanukah — gathering with friends and family, eating Bubbie’s latkes, and no homework!  When things don’t go the way they want, will they be able to repair the holiday — and their relationship? In The Cranky Penguin by Keegan Patterson, Yeti and their friend Walrus try to convince Penguin the season’s not that bad, madness ensues, and many snowballs are thrown. And Connection, by Diego Maramba and Michelle Bowen-Ziecheck, builds bridges from the Philippines to America, with love lasting beyond the bounds of space and time between best friends Mal and Daniel.

Make Way for Ducklings
February 4 – March 27, 2022
Adapted for the stage by Sandra B. Eskin and Michael J. Bobbitt; Music and Lyrics by William Yanesh

Mr. and Mrs. Mallard are exhausted from searching for a starter home when they land in the Boston Public Garden as a potential home for their baby ducklings. The challenges of parenthood in the busy Boston environment create a fun bit of family drama.

Poop! The Musical tells the story of Taro, a young Asian-American boy who faces the ridicule and bullying of his classmates when he accidentally “poops in his pants.” Too ashamed to talk to anyone or return to school, Taro can only confide in his “best friend” — a stuffed toy rabbit who helps him overcome his shame by taking him on a “magical” journey through space and time.

Fantastagirl, a second-grade superhero who uses words to save the day, comes face to face with her worst nightmare: the Math Monster! Fantastagirl must accept help from her friendly, furry, fraction-loving foe when confronted with problems too big for words alone to solve.