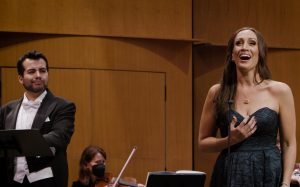 Javier Arrey as Riccardo and Brenda Rae as Elvira in Washington Opera Concert’s “I PURITANI: Recorded in Concert.”

The 1648 victory of the “Roundhead” Puritan forces of Oliver Cromwell over the Cavaliers of King Charles I in England may seem an odd subject for an opera. Yet the event did command the attention of many artists of the past, including the playwright Gryphius in his Baroque drama, “Carolus Stuardus.” In the opera, “I Puritani,” by Vincenzo Bellini, we are met with the young woman Elvira of a Puritan family who is loved by both Roundhead Lord Arturo Talbo and Puritan Riccardo Forth. Her preference is for Arturo, but he is presently consumed with spiriting Queen Henrietta Maria out of England lest she meet the fate of her husband, the executed Charles.

For opera lovers, the Washington Opera Company’s “I Puritani” is a rare and excellent opportunity to enjoy this unique opera in an excellent concert production.

This opera performance by Washington Concert Opera was pre-recorded in concert form at the Rachel M. Schlesinger Concert Hall in Alexandria, Virginia. It features excellent performances by the singers Brenda Rae, René Barbera, Javier Arrey, and Musa Ngqungwana, as well as members of the Washington Concert Opera Orchestra, all conducted exquisitely by Artistic Director Antony Walker.

This opera is at once a very good but a very unusual choice for a concert version. On the one hand, it is not among the better-known operas today and not often performed, and thus an elaborately staged production might have been a difficult endeavor. This concert production thus gives the audience an excellent introduction to Bellini and an opera of historic interest. On the other hand, “I Puritani” is a unique choice for a concert production, as the audience may be unfamiliar with the story and music, and sets and costumes would make the story more accessible. Yet Washington Concert Opera in this production features operatic performances, both vocal and instrumental, which are superb.

As for the individual performances, soprano Brenda Rae sings beautifully and emotes well as the romantic heroine Elvira, especially in her performance of “Son vergin vezzosa.” Musa Ngqunqwana as Elvira’s beloved Uncle, Giorgio Valton, acquits himself admirably with lines such as “crowned and adorned with flowers, the young woman wanders aimlessly…” Mr. Ngqunqwana is an effective storyteller through music as the orchestra and the conductor play string instruments softly and sonorously to match his lyrics and in pleasing contrast to the stirring, dramatic flourishes elsewhere in the score. He joins baritone Javier Arrey as Riccardo for the impressive duet “Suoni la tromba.” In the “Credeasi Misera,” Mr. Arrey conveys vocally the drama of the conflict between the Roundheads and the Cavaliers: “Cavalier, all-punishing God has caught you in your treachery!” Tenor René Barbera, playing an impressive role as Lord Arturo Talbot, the Romantic lead, has many of the key lines and dramatic moments, for “death is easy to the brave.” He sings his part with precision and gusto, effectively conveying Arturo’s dilemma in saving the Queen possibly at the expense of winning Elvira, the woman he loves: “Unhappy woman, she believed that I betrayed her,” in the words of the helpful English subtitles. Yet we are reminded that despite this being a romantic and melodramatic opera (for which Bellini is known), and the story being of a revolution and religious warfare of centuries past, there is a happy ending.

For opera lovers, the Washington Opera Company’s “I Puritani” is a rare and excellent opportunity to enjoy this unique opera in an excellent concert production.

Washington Opera Company’s “I Puritani” is pre-recorded concert, filmed at the Rachel M. Schlesinger Concert Hall in Alexandria, VA. Registration is FREE by clicking here. It is available for viewing through July 26, 2021.