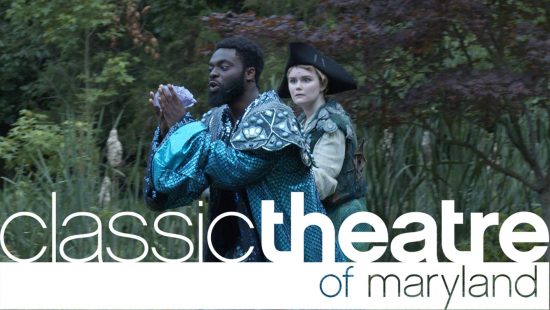 What is more idyllic than watching “A Midsummer Night’s Dream” on a warm July evening at a beautiful historic estate? Your answer might be, not much, especially after a year of theatrical drought. Classic Theatre of Maryland is presenting their production of, perhaps, the Bard’s best comedy at the Gresham Estates on the lawn of Gresham Mansion (built originally in the 1600s), in Edgewater in Anne Arundel County. The play is directed by the very experienced and talented Sally Boyett.

Traditionally a wonderful play for an ensemble, and CTM (formerly Annapolis Shakespeare Company) continues to provide the talent for these kinds of productions. Indeed, “A Midsummer Night’s Dream” has several important roles but no real leading actor. What character is more important? Puck (Claire Metusalem)? Bottom (John Pruessner)? Oberon (Joshua Olumide) and Titania (Andrea Bellamore)? The four young lovers? In this play, Shakespeare has divided up the spotlight.

The Classic Theatre of Maryland has created a must-see production as the world opens up again. What can be more enchanting than young love or a man with the head of a donkey?

In case you either never read the manuscript, saw a previous production or just not quite remember, this is one of the best-known comedies for having a play-within-a-play. The time is ancient Greece and its king, Theseus, is marrying Hippolyta (dual roles for the actors who play Oberon and Titania). There are four young lovers. Hermia (Kira Bennett) and Lysander (Cody Marshall) are in love but Hermia’s father, Egeus (Dexter Hamlett) wants her to marry another suitor, Demetrius (Jeremy Sapadin). Helena (Elena Anderson), another young lady of the court, is in love with Demetrius. Hermia and Lysander flee into a nearby wood followed by the other two young Athenians. The wood is filled with fairies lead by Oberon and his love, Titania. The fairy king and queen have had a spat and Oberon conspires with a fairy, named Puck to get even with Titania. Puck get a special flower that will make his queen fall in love with the first thing she sees when she wakes. In the middle of this plan, Oberon overhears Helena pleading with Demetrius to love her and not Hermia. He tells Puck to use the flower to make Demetrius love Helena. Puck confuses Lysander for Demetrius and chaos follows.

At the same time in Athens, a group of commoners are preparing a play in honor of the nuptials at the palace, lead by Quince, a Carpenter (Dexter Hamlett). Taking the romantic lead of Pyramus, is Bottom, a Weaver (John Pruessner). Bottom is a pompous fellow who thinks he can play every role. The female lead, Thisbe, will be played by Flute, a Bellows-mender (Nathan Kowalczyk). Rounding out this cast of misfits is Starveling, a Tailor (Michael Tolbert) slated to be Thisbe’s mother and the Moon, Snout, a Tinker (Tyler Godden) who will play Thisbe’s father and the Wall, and finally, Snug, a Joiner (Josh Lee), who will take on the role of a not very ferocious Lion. They go into the same mystical wood to rehearse. While there, a spell is cast on Bottom who is partially turned into an donkey. You can probably guess who Titanian sees when she awakens. The ending of the play is this ragtag troupe’s performance for the newlyweds and one of Shakespeare’s most memorable scenes.

Olumide is a wonderfully aristocratic Theseus and a very sexy Oberon. Bellamore also is outstanding as both Hippolyta and the donkey-smitten Titania. The two have wonderful chemistry as both pairs.

Metusalem creates a Puck that is a little wiser than I have previously seen. She seems to be a little more in control of the fairy’s machinations.

Anderson’s Helena has just the right pluck, and in her scene when she becomes the center of attention of both young men, Anderson portrays perfectly Helena’s frustration and anger. Bennett plays the more “frail” Hermia until the young maiden realizes her lover now is smitten with her friend. Bennett’s comedic timing as she chases her new rival creates another wonderfully playful moment. Sapadin’s Demetrius has added a different dimension to his character. His Demetrius is very harsh to Helena as she tirelessly tries to pursue him. It works, and Helena becomes more sympathetic as a result. Marshall also makes Lysander memorable, and his and Sapadin’s sword fight is very amusing.

Pruessner is a bit more mature than other Bottoms I have seen. However, he is just as funny and uses his talents to recreate one of the most hilarious and ridiculous Bottoms, I have seen. He never misses a chance for a laugh but does so without upstaging Titania or his fellow would-be thespians during the play-within-a-play.

All the actors in that subgroup are riotous. Lee’s Lion is priceless and Godden’s Wall is very cleverly done. Hamlett’s Quince has just the right obsequence to Bottom’s demands. Kowalczyk’s Thisbe is a knee-slapper and Tolbert’s Moon also is perfectly farcical. My only observation is they used a real dog as the dog. The problems with using animals in a live production is that they can steal scene, and Sadie did just that a couple of times.

Rounding out this outstanding cast are Ella Stoller and Sophie Stromberg as Fairies, Peaseblossom and Mustardseed. Their singing and dancing help create this magical performance.

Boyett’s direction keeps everything running smoothly. She uses the beautiful surroundings to propel us into this magical plot. Her actors can always be heard, even when equipment sometimes fails. She stays true to the playfulness of the play but incorporates her own interpretations. Boyett also is the choreographer as well as the costume and sound designer. The 17th-18th century clothing looks just right in this setting. I still wonder how she kept her actors so cool in these multi-layered costumes during the warm summer night.

Love Ruddell-Cosgrove has her hands full as the stage manager along with assistants, Grace Weaver and Skyler Vann. The actors often have to circumnavigate the large lawn and surrounding gardens and trees, but no one misses their mark. That takes a lot of planning and teamwork.

The work of the lighting designer, Mikayla French, plays more of a role in the second half after the sun went down.  The lighting in this large grassy space is well done.

Anyone who loves Shakespeare will thoroughly enjoy this version of “A Midsummer Night’s Dream.” Those who have never seen this comedy or may not always find the Bard’s work easy to follow should not have those problems as this piece is not just a play of words, but has a great deal of physical comedy. Classic Theatre of Maryland has created a must-see production as the world opens up again. What can be more enchanting than young love or a man with the head of a donkey?

Running Time: Two hours and 15 minutes with an Intermission.

Classic Theatre of Maryland’s production of “A Midsummer Night’s Dream” runs Thursday- Sunday until July 25, 2021 on the lawn of the Gresham Estate, 784 Mayo Road, Edgewater, Maryland. For tickets go to this link. You can come early and picnic (check regulations). Chairs are provided, or you can bring your own chair or blanket.

Reviewer’s Note: Although your searches may state the Gresham Mansion is in London Town, it is not. Use the Mayo Road address above to find your way there. Also, insect repellent may be advisable.