Theatre Review: ‘A Play for the Living in a Time of Extinction’ presented by Baltimore Center Stage 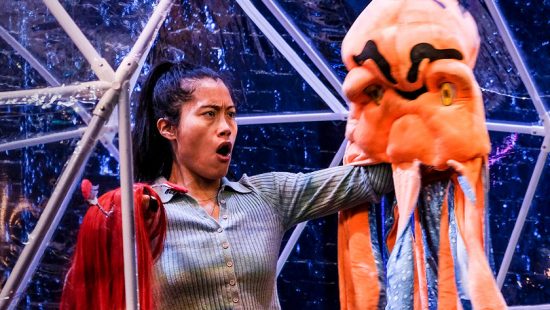 As spring 2021 turned to summer, several of the Baltimore area theater companies had already returned to in-person performance while others were soon to follow, many taking advantage of their outdoor alternatives. Some have continued with streaming productions while others have been and will continue to offer a hybrid of streaming and in-person options. The bulk of the area’s theaters have announced plans to resume this fall. Baltimore Center Stage will resume in-person performances with their next production, “The Swindlers,” in September. Currently, it is presenting “A Play for the Living in a Time of Extinction,” a world premiere by local writer Miranda Rose Hall and directed by Taibi Magar. It was originally scheduled for three months ago. Produced in June, the play can be seen through on-demand streaming.

…the message is compelling.

The solo performer, Lindsay Rico, plays a panic-stricken dramaturg/stage manager named Naomi. Her company, Zero Omissions, is closing a two-year tour of a devised “Inconvenient Truth”-ish play called “Climate Beasties.” On the last night of the tour, both cast members are absent due to a family crisis, and Naomi is pushed onto the thrust stage of the Pearlstone Theater in order to make apologies to the house as well as to the folks watching at home. Naomi is not an actor and is understandably anxious about having to kill 90 minutes on stage all by herself. “I don’t travel with a one-woman show in my back pocket,” she tells us. “I do travel with research and snacks.” Based on the research she’s compiled in her five-inch thick, three-ring binder, Naomi decides to deliver an impromptu TED Talk consisting of the geological and biological history of planet Earth. This, after first telling us that science was never a strong suit for her. It comes a bit more naturally, perhaps, for Naomi to address issues of race and class justice within the homo sapien species itself, but either way, Naomi’s message is clear and loud, summarized best when she uses puppets to perform a short bit of “Climate Beasties.” There’s a musical number, “Everything is dying, It is all your fault,” follows a dance break. We believe it.

The sole reason “A Play for the Living in a Time of Extinction” is, in fact, ‘for the living’ seems to be that only the sentient living are able to view it. Aside from that, the protagonist of the story is our ecosystem, the antagonist is us, and the plot consists of death, dying, and more death. At times, this is a very funny piece. It also carries a lovely, hopeful irony in its litany of prior mass extinction events (our current one is the fifth) on Earth — that even though most life on the planet was destroyed in each past occurrence, Earth itself survived and gave birth to new life afterwards. So it turns out that we humans are probably not destroying the planet after all. We’re just destroying ourselves and most other life that we know about except rats. Our 50,000 years of living here are (were?) a nice run, but scarcely a blip in the world’s timeline. We don’t actually matter.

Again, Hall has a script here that has a lot of humor in places, and that vital relief is largely due to a frenetic pace directed by Magar and performed by Rico. It’s worth noting that taping for this piece took place over a three-day period and isn’t a recording of a single uninterrupted performance. Filmed last month, post-production was completed a few weeks ago. There might not be an actor in Maryland who could sustain Rico’s fast pace and pinball blocking for an hour and a half straight. It looks like a piece that would be highly engaging to experience in person, or even live-streamed. In its current form, the theatricality seems to suffer a bit, but the message is compelling. We are all thankful that the immediacy of theater is returning, and hope that every stage is reawakened before all of us are gone.

“A Play for the Living in a Time of Extinction” is presented by Baltimore Center Stage and streams through August 8, 2021. Tickets are $15 to $25 and available online. The show is on demand, viewable any time within a two-week window of ticket purchase.