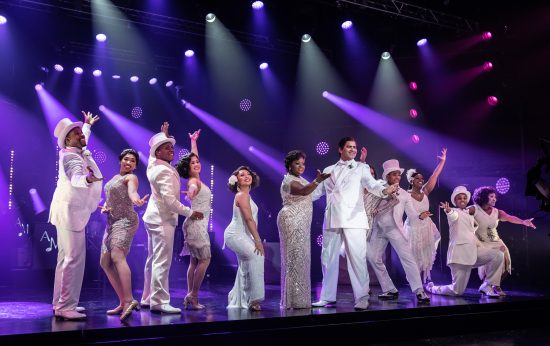 Christopher Jackson, Nova Y. Payton and the cast of After Midnight. Photo by Christopher Mueller.

If you find yourself missing live theatre, the streaming production of “After Midnight” by Signature Theatre is the next best thing to being there in person.

…highly recommend “After Midnight” as a spirited and entertaining journey through top Big Band hits of the Harlem Renaissance..

Featuring “Hamilton’s” Christopher Jackson and local phenom, Nova Y. Payton, along with a stellar cast, “After Midnight” is a big band musical revue of 28 hits of the Harlem Renaissance, beautifully intertwined with poetry by Langston Hughes.
Christopher Jackson narrates our stay on Lenox Avenue by reciting each poem with a passion that brings the words to life and makes them sing and sizzle. He also closes the show with a brilliant, solo tap dance that will leave your jaw on the floor.
If you’re worried that a musical revue won’t hold your attention, don’t be! “After Midnight” is thoughtfully constructed with a wide variety of songs, from fast to slow, romantic to heartbroken, and to downright silly. Each song features its own charmingly unique choreography by Jared Grimes (who also directs) that will keep you captivated from beginning to end.
For example, “I’ve Got the World on a String,” arranged by Duke Ellington, uses a hot air balloon and its string to playfully illustrate the song. I was entertained when it was only the soloist (Jackson) using the balloon as a prop, but then the whole cast joined in and the experience became completely magical.
Some of my favorite numbers were the comedic ones sung by a very drunk club patron played by Shayla S. Simmons. She sang “Woman Be Wise” and “Go Back to Where You Stayed Last Night” with utterly hilarious gusto. Whether she was growling out scat singing to the band or (literally) dropping the mic, I couldn’t stop laughing.
“Peckin’” was an instructional song for a dance inspired by a chicken, and the quartet of male cast members (Phillip Attmore, DeWitt Fleming Jr., Andre Hinds, and Solomon Parker III) were so fantastic with their silly posturing and the over the top dance moves that I almost burst into applause at the end, right in my living room.
Nova Y. Payton’s stellar vocals shine on multiple solos throughout the evening. One of my favorites was “Stormy Weather,” which gave her a chance to truly show off her amazing range and versatility. It took my breath away.
“The Gal From Joe’s” gave us absolutely haunting harmonies by the ladies’ vocal trio made up of Jessica Bennett, Kanysha Williams, and Jennie Harney-Fleming. Sophia Adoum finished the piece with an emotive modern dance solo. Jodeci Milhouse dazzled in an energetic tap solo on “Raisin’ the Rent” as well as several other tap numbers throughout the show.
Mark G. Meadows provides outstanding musical direction, playing the piano and leading the band with enthusiasm from a prominent position on the stage, where he is able to interact with the vocalists on several numbers.
I highly recommend “After Midnight” as a spirited and entertaining journey through top Big Band hits of the Harlem Renaissance. You will be enchanted by the cast’s outstanding talent as well as the rich variety of song and dance numbers, and you’ll almost feel like you’re back at live theatre again.
Running time: Approximately 90 minutes with no intermission.
Advisory: A few songs have some adult innuendo; use discretion for children.
“After Midnight” is available to stream from Signature Theatre through August 4, 2021. For ticket information, click here.