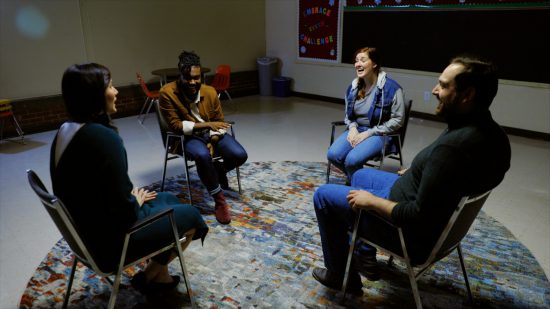 Welcome to the dog days of summer as we all could use some respite from the heat, humidity, and ongoing COVID restrictions. Two unique programs, Monumental Theatre Company’s “Songs for a New World” and the Chamber Dance Project’s “Tear the Edge,” both streaming through July, can’t promise a cure for these summer blahs, but they sure can point us in the right direction.

Monumental Theatre Company’s “Songs for a New World,” written by Jason Robert Brown for an off-Broadway run, remains as relevant today and it was when first created 26 years ago. Even more so, perhaps, as it demonstrates a bold step back to normalcy where we can confront our fears and hopes face-to-face with foes and friends.
Because of its small cast and live orchestra, “Songs for a New World” has become a favorite show for colleges and local theaters. It has been produced dozens of times in our area and will soon hit the stages in new productions, including REP Stage at Howard Community College slated for a September debut.
Curious about the popularity of the “song-cycle,” as it is familiarly called, I checked with Carole Graham Lehan who has directed “Songs for a New World” for the Columbia Center for Theatrical Arts, among other theatrical troupes, and has great admiration for the Brown’s writing and the message he purposes.
“His writing is such great story telling,” says Lehan with more than a hint of admiration for the author. “Every song is a story by itself…a three minute play where each character has a problem that he/she has to overcome. There is such hope in the songs, and we are so desperate for such hope. He (Brown) creates a world that we all can hang on to it.”
Hopeful, indeed, is Monumental’s rendition of “Songs.” And what stories they tell.
At first glance you see a woman walking down a long hallway and wonder to where? A classroom? A hospital? A prison? It’s a bit grim until she joins her support group in what looks like a middle school classroom where the group shares stories and belts out song after song until you want to jump up and join in
From the very start of this “song-cycle,” you get the feeling that these characters are going to make it — in fact, you start humming with them early on. Kylie Clare Smith begins her tale with a powerful “I’m Not Afraid of Anything.” Still the ensemble harmonizing to “New World” that brings the theme of hope to realization.
Even the classroom looks brighter after Elvie Ellis offers his gospel-like take of “Stop, Take a Look” and “You
Don’t Know Me, But You Will.”
As with any musical, questions of acting and script become irrelevant. The pertinent questions are:  How good is the singing? How good is the dancing? How good are the songs? The short answer is: a definite highpoint in all three. As a bonus, the director can choose to set the show anywhere that seems interesting. It’s really cool that we get to see members of the cast in a bathtub (with her pearls dangling) or outside in a field where the quartet dancing a la Isadora Duncan, on a track field, and cooking something special on the stove.
Director Megan Bunn does a swell job with the cast of four, identified only as Woman 1, Man 1, Woman 2, Man 2, each hitting the right emotional notes in a moving collection of songs and stories. Kudos to Music Director Marika Countouris and Choreographer David Singleton for keeping things moving at a brisk pace.
The cast Elvie Ellis, Kylie Smith, Ryan Burke, and Sarah Anne Sillers are total pros in sharing deeply personal songs and heartfelt tales of love and loss. The show features the largest orchestra of any Monumental project so far, which makes this a tune-in must.
Running Time: 120 minutes
“Songs for a New World” streams now through July 31 by Monumental Theatre Company. Tickets are available online. For more information, fro to this link.