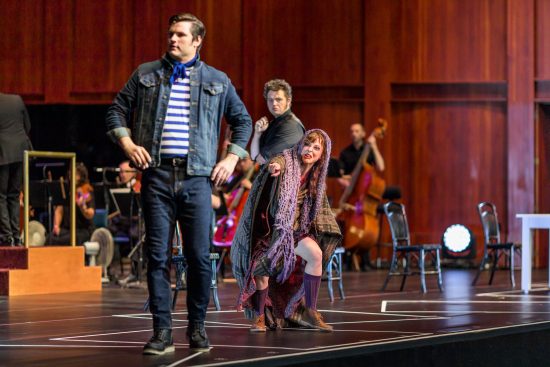 After over a year of only virtual theatre, this reviewer walked up to the gates of the Filene Center at Wolf Trap National Park for the Performing Arts on a gorgeous warm and sunny evening. It was truly exhilarating being welcomed back to one of my all time favorite performance venues, especially after such a fraught and challenging year. It was also special because this year, Wolf Trap is celebrating the 50th anniversary of the Filene Center, their one of a kind outdoor amphitheater.

…the combination of these talented young performers, the incomparable outdoor venue, and the glorious tones from the NSO, makes this production feels unique and fresh.

“Sweeney Todd: The Demon Barber of Fleet Street” is one of the most well known works of prolific musical theatre giant Stephen Sondheim. It is a dark and macabre tale of revenge and betrayal. It tells the story of wrongly imprisoned barber, Benjamin Barker, now going by Sweeney Todd (Thomas Glass) who has made his way back to London after 15 years away. He was fished from the sea by altruistic young sailor, Anthony Hope (Jonathan Bryan), with whom he parts ways after a warning about the viper pit in which they now find themselves. He soon arrives back at his former home and is informed by the proprietress of the meat pie shop below, Mrs. Lovett (Meghan Esther Grey), that his wife, Lucy, was tricked by local copper, Beadle Bamford (Wayd Odle), into falling into the clutches of corrupt Judge Turpin (Nicholas Newton). After being assaulted and humiliated, Lucy poisoned herself and their daughter Johanna became the ward of the nefarious Turpin. Todd swears revenge at all costs. When a rival barber, Adolfo Pirelli (Christopher Bozeka), threatens to expose his true identity, he puts his vengeance into action and a horrible plan is hatched between Todd and Lovett, one which will affect everyone, including Johanna (Alexandra Nowakowski), young Tobias (Conor McDonald), and a mysterious beggar woman (Shannon Jennings.)

Co-presenting this concert version of the musical, Wolf Trap Opera is an amazing summer residency program for up and coming singers from across the country. After an extremely competitive audition tour, WTO selects a group of incredibly talented emerging performers for unparalleled career development and performance opportunities. Instead of casting for a preselected season, WTO instead selects the best vocalists and then finds performance opportunities that best fit their styles and strengths. Therefore, the shows presented as a part of Wolf Trap Opera allow audiences to get the pleasure of experiencing talented young performers who are also able to develop their craft. When paired with the unsurpassed musical excellence of the National Symphony Orchestra, it creates experiences of the highest musical quality.

I am a big fan of this musical, as strange and twisted as it is. As a result I have seen a large number of productions of “Sweeney Todd” — several local community theatre interpretations, two videoed professional productions (the original Broadway production with Angela Lansbury and the Live from Lincoln Center Concert version with Emma Thompson), and the 2007 film adaptation starring Johnny Depp and Helena Bonham Carter. Even though this show has been a popular one to produce in the past few years, the combination of these talented young performers, the incomparable outdoor venue, and the glorious tones from the NSO, makes this production feels unique and fresh.

Glass did an amazing job in a demanding leading role. His rich, baritone was stunning to hear, and he was able to walk the fine line between menace and sympathy needed to be successful in this character. Grey leans into the darkly comedic side of the character of Mrs. Lovett and delivers laughs as well as vocals. Bryan and Nowakowski have great chemistry and range as they show the difficult journey of the young lovers, and similarly, McDonald delivers a moving performance as a street child who loses his innocence on the path to madness and death. Odle and Newton are effective as the villainous pair of power-abusers, both having voices that expertly handled the roles as well as deftly managing the balance of comedy and drama. Jennings excelled in a difficult role, maintaining the mystery of her identity and then delivering the truth with a punch to the gut. Finally, Bozeka was a standout in a talented cast and stole ever scene he was in as the duplicitous Pirelli. Also, I would be remiss to not mention the fabulous ensemble. They often act as the narrator of the piece and not only did they show that they have incredible voices, they also added the needed richness and ambiance to the show.

All of the vocal performances in this show were exquisite, but the duet and multiple voice moments were the real standouts for me. The blending of voices and mastery of Sondheim’s notoriously difficult harmonies was truly impressive. My top performances were “Pretty Women” with Sweeney and Turpin, “Kiss Me” with Anthony, Johanna, Turpin and the Beadle, and “Pirelli’s Miracle Elixir” with Pirelli, Sweeney, Lovitt, Tobias, and the Beadle.

Seeing a show like this was a unique experience in the Filene Center. In most productions I’ve seen, there is a lot of darkness used in the lighting to match the morose themes and dirt of London. However, since this venue is outside, the first act of the show was still bathed in sunlight. That added a new dimension that as the story got darker, so did the surroundings. It was awesome atmospheric addition to the storytelling. This production was also semi-staged, so the costumes and set pieces were kept at a minimum. This only threw the attention more thoroughly on the talent of both these young performers and the NSO. It was an amazing experience at the level that I have come to expect from Wolf Trap, and after so long away, it felt like coming home.

Advisory: The show has mature and disturbing subject matter, including themes of murder and cannibalism. It is not recommended for anyone under 16 years old.

While “Sweeney Todd: The Demon Barber of Fleet Street” was a limited run (July 2 and 3) which has now concluded, you can still enjoy one more entry in the Wolf Trap Opera Salon Series (July 15th) and “Cinderella (Cendrillon)” I “Savitri” (July 16th).  For more information on where to find tickets, click here.  For more information on other concerts this summer at Wolf Trap this summer, click here.

Also, please note that there are still pandemic safety protocols in affect at Wolf Trap. More information can be found here.