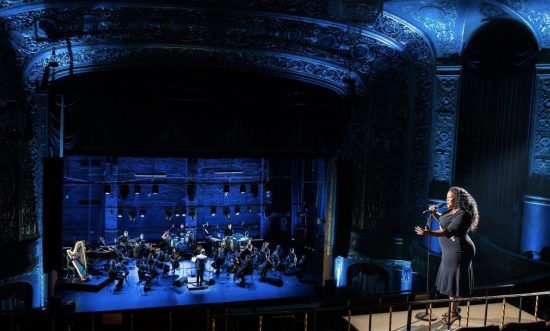 On Sunday, August 29, 2021, PBS premiered “Wicked in Concert.” The show was hosted by the former co-stars of the original cast, Kristin Chenoweth and Idina Menzel. The music was provided by the American Pops Orchestra with Luke S. Frazier conducting.

With music and lyrics by the legendary Stephen Schwartz, “Wicked’ premiered n 2003 and is now the fifth longest running show on Broadway. The story is based on the 1995 Gregory Maguire novel “Wicked: The Life and Times of the Wicked Witch of the West.” It is his creative imagining of how the two witches, Glinda and Elphaba, became good and wicked and what happens to them after Baum’s novel, “The Wonderful Wizard of Oz” ends. Despite conflicts due to the same love interest and different societal reactions to each witch, the two become friends.

Under Frazier’s musical direction and Baayork Lee’s direction, a variety of well-known Broadway actors and singers performed numbers from the memorable score.

Whether you are a big fan of “Wicked” or always wanted to hear the music, “Wicked in Concert” on PBS will exceed your expectations.

The concert opens with the “Overture” performed flawlessly by the American Pops Orchestra. While Chenoweth and Menzel narrated, the various singers performed the songs. The first is the duet with Glinda and Elphaba, “What is this Feeling?” performed by the very talented Gabrielle Ruiz (“In the Heights”) and Amber Riley (“Glee”) in which the two characters discuss their rivalry.

The beloved EGOT winner, Rita Moreno as the Head Mistress, and the fast-rising star, Arianna DeBose (“Summer: The Donna Summer Musical”) as Elphaba, sang “The Wizard and I.”

“Dancing Through Life” was performed by gifted Isaac Powell (“West Side Story” – 2019 Broadway Revival) as Fiyero, the party boy for whom both witches have fallen. The gifted Stephanie Hsu (“The Marvelous Mrs. Mazel”) then croons “I’m Not the Girl” as Elphaba who believes she is losing Fiyero to Glinda’s charms.

The bubbly and accomplished Alex Newell (“Once on This Island”) gets the joint jumping with “Popular” accompanied by four pianos. The versatile singer, actor, and stand-up comic, Mario Cantone sings the Wizard’s number, “Wonderful.”

The spectacular Tony Award-winner Cynthia Erivo (“The Color Purple”) sang “I Couldn’t Be Happier” as a sweet lullaby while the string secion tof the orchestra created the mood. Riley returns to belt out the iconic “Defying Gravity.” The lyrics describe Elphaba’s acceptance of herself and her refusal to see the limits that others have drawn for her.

The accomplished songstress, Jennifer Nettles, performed Elphaba’s song of regret, “No Good Deed.” Ruiz returns with the Reprise of Glinda’s version of “I’m Not That Girl.”

It wouldn’t be a night of “Wicked” without the two original stars, Chenoweth and Menzel, in a duet of the song that spotlights the enduring friendship between Glinda and Elphaba, “For Good.”  It is the frosting on the cake.

There is also a brief montage of various arrangements and performances of many of the Steven Schwartz’s melodies. (Robert Pullen was the executive producer.)

Whether you are a big fan of “Wicked” or always wanted to hear the music, “Wicked in Concert” on PBS will exceed your expectations. To quote Frazier, Schwartz’s music and lyrics in “Wicked,” catches the range of human emotions.”

The program may be available on your PBS Station. If not, you can become a Sustained Member of PBS by going to this link, where this and other wonderful PBS programs can be viewed on demand.

You can read more about Luke S. Frazier in Susan Brall’s ‘A Quick 5.’