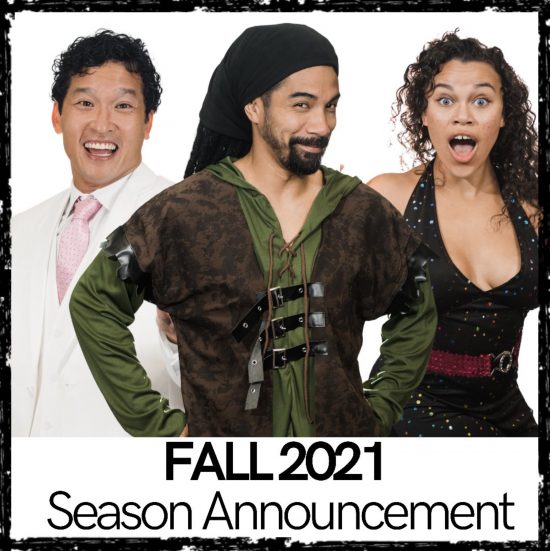 Herndon, VA/Washington, DC – Producing Artistic Director Evan Hoffmann announces the full reopening of NextStop Theatre Company with the first shows of their eighth season of professional theatre in Northern Virginia. The Fall 2021 Season at NextStop will bring the excitement of live, full-scale performances back to Herndon.

“I am so unbelievably excited about sharing the joy of live theatre with our community again,” says Hoffmann. “It has been an unbelievably trying time for all of us. So we thought it was only fitting to make our return with a collection of shows that are all about celebrating our ability to face uncertainty with grace, to overcome adversity with conviction, and above all else, our capacity to persevere with compassion and perhaps some humor!”

The season opens with An Act of God, a sinfully funny comedy in which God, along with his two “wingmen,” answer some of the most pressing questions that have plagued mankind since Creation. At what feels like just the perfect time, the Almighty is coming to Town to answer the thought on everyone’s mind: “What is going on?!” The production opens August 12 and continues through September 5, 2021. An Act of God is written by 13-time Emmy Award winner David Javerbaum (The Daily Show with Jon Stewart), directed by Helen Hayes Award winner Tuyet Pham, and will star NextStop favorite, Jacob Yeh (Pride and Prejudice, East of Eden).

September will bring an ambitious outdoor production of Ken Ludwig’s Sherwood: The Adventures of Robin Hood, sponsored by Northwest Federal Credit Union. For this extra special community event, NextStop will create a temporary open-air theatre in the parking lot of the Northwest Federal Credit Union Headquarters in Herndon. This special production will give audiences the chance to come together with their neighbors for a rip-roaring romp through Sherwood Forest, featuring all the thrills and romance you could possibly ask for! Flying arrows, clanging swords, and perilous feats of daring fill this not-so-ye-olde tale of everyone’s favorite hero outlaw and his noble quest to steal from the rich and give to the poor! This limited-run production opens September 10 and runs through September 19, with only six performances. Megan Behm (Pride and Prejudice, 45 Plays for 45 Presidents) returns to NextStop to direct this special celebration of our community coming back together!

Finally in October, NextStop will poke fun at all of our unanticipated troubles with the 70’s disco musical, Disaster! by Seth Rudetsky and Jack Plotnick. This hilarious spoof of classic disaster films has it all: Disco fever, earthquakes, man-eating piranhas, tidal waves, and explosions threaten the lives of all those aboard the Barracuda, a high-class floating casino. With larger-than-life characters, hilarious dialogue, and hit songs like “I Will Survive”, “Knock on Wood”, “Hooked on a Feeling”, “I Am Woman”, and “Hot Stuff”, Disaster! will have you dancing in your seats, rolling in the aisles, and hang on for dear life! The show will be directed by NextStop’s Producing Artistic Director Evan Hoffmann and feature choreography by Helen Hayes Award winner Ashleigh King and music direction by Elisa Rosman.

The announcement of the limited, three-show Fall 2021 lineup comes as a significant departure from NextStop’s pre-pandemic seasons, which regularly featured an eclectic and ambitious collection of as many as six to ten plays and musicals, scheduled over the course of a full year. However, Hoffmann and the NextStop Board of Directors, felt it was necessary and appropriate that the organization take a more careful and measured approach to this season as they consider what the organization and theatre in general looks like in the future. An announcement about the Spring 2022 season is expected later this Fall.

“Despite all the challenges and hardship, it is impossible to deny that the experience of the last year and a half has taught us so much,” says Hoffmann. “We have discovered so many ways that we as an organization and a community need to rethink how and why we do what we do. While I am so eager to see the curtain rise again this Fall, I am even more enthusiastic about the opportunity before us to rebuild in a way that makes us a much stronger institution, a more thoughtful and supportive home for artists, and an even more welcoming and inclusive destination for everyone in our community. The future is very bright!”

Season packages for the three-show Fall season go on sale on Monday, July 19th, with pricing beginning at $80 for all three productions. Benefits of subscribing include first choice of performances, significant savings over individual ticket prices, fee-waived ticket exchanges, and premier access to subscription and tickets for the Spring 2022 season. Season subscriptions are available by calling the NextStop Box Office at 703-481-5930 x0 or by visiting here.