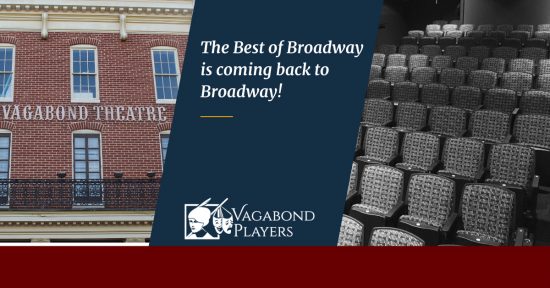 We are very excited to announce that the best of Broadway will be back on Broadway starting in January 2022 with a lineup worth waiting for.

Lane’s maid, Mathilde, doesn’t want to clean.  She wants to be a stand-up comedian.  All Lane wants is a clean house — and a husband who doesn’t cheat on her. Sarah Ruhl’s wryly funny and deeply moving comedy joyously demonstrates that the best things in life — a sublime joke, a fulfilling purpose, a soul mate — are infinitely worth waiting for.

“…one of the finest and funniest new plays you’re likely to see this season.” – The New York Times

A comedy of manners…without the manners, Reza’s Tony Award-winning Broadway sensation offers up the guilty pleasure of watching a pair of upper middle-class marriages go boom. The playground altercation between two eleven-year-olds brings together four parents who think they can resolve things in a civilized, adult manner. BUT, as the evening progresses, and the drinks flow, the gloves come off and pure animal instinct reigns supreme.

A successful Pakistani-American lawyer has turned his back on his culture and heritage in pursuit of the American Dream – living a life of luxury with a beautiful Caucasian wife and a lucrative promotion within his grasp. Ayad Ahktar’s Pulitzer Prize-winning drama shows how Amir’s world rapidly implodes at a dinner party with his African-American co-worker and her Jewish husband that shatters relationships and everyone’s beliefs about race and religious identity.

“…a blistering social drama about the racial prejudices that secretly persist in social circles….Ahktar knows how to build a scene and maintain suspense.” – Variety

THE FANTASTICKS running May 20 – June 19, 2022
Music by Harvey Schmidt, Book and Lyrics by Tom Jones
Directed by Jimi Kinstle

There’s always time to remember this legendary romance about a boy, a girl, their two fathers, and a love that transcends all boundaries and expectations. Filled with one of the finest scores ever written for the stage, this bewitching comedy and haunting love story has entranced generations of theatregoers, and will be sure to enchant and captivate Vagabond Players’ audiences for a long time to come.

“From ‘Try to Remember,’ the show’s best-known tune, to ‘Soon It’s Gonna Rain,’ to the haunting ‘They Were You,’ the songs are reminders of what make this little musical so hypnotic.” – Associated Press

Thanks to the ongoing support of our patrons and organizations like the Maryland State Arts Council, we’re eager to reopen the doors and welcome everyone back to the stage.

More information will be available soon about auditions, opportunities to get involved, and season subscriptions and tickets. vagabondplayers.org