Theatre Review: ‘And Then There Were None’ at Kensington Arts Theatre 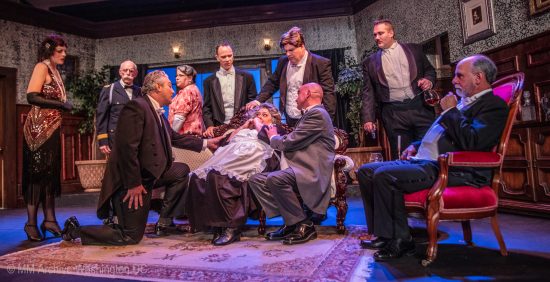 After a hiatus in which much of live theatre was on hold in DMV area, we have a heart-stopper of a show. Kensington Arts Theatre presents the classic of classics, Agatha Christie’s “And Then There Were None,” based on her mystery novel of the same name. Fun fact: this book, by the one of the greatest whodunit writers ever, remains one of the best-selling books of all time. We just love our chills and thrills. Through a complicated series of twists and turns navigated by talented actors dealing with compromised characters, KAT provides a most enjoyable evening of suspenseful guesswork.

Grand Dame Agatha wasn’t very PC and the title of her 1939 version of the book was based on a children’s rhyme and minstrel show influences that included a racial slur. It was then modified to only insult Native Americans as “Ten Little Indians.” The current title incurs no ethnic insult and gets to the offing, right on schedule.

The plot is meaty and complicated, and Christie recalled it was the most challenging plot she has ever attempted. And as we sift through the character’s back stories, the guilty pleasure that the KAT performers excel at is providing the nuance, the hidden “tells.”

We are introduced to a stormy sea and seafaring deliveryman, Fred Narracott (Matt Leyendecker) in a fine rough Devon accent, as he enters a large one room English countryside parlor, courtesy of Scenic Designer, Syndi Huth. The housekeepers, Mr. and Mrs. Rodgers (nicely stodgy David Linn and Meghan Williams Elkins), are bustling about and complaining of so much work to do to prepare for eight houseguests.

KAT provides a most enjoyable evening of suspenseful guesswork.

The group arrives by boat to a lonely island and cautiously feel each other out between cocktails, all the time wondering what the connection is between them. Upon instructions, Rodgers puts on a phonograph record which accuses each visitor as well as the Rogers of having committed murder, and says the murdered will be avenged. We are now off and running. Who is acting scared and who is play-acting? The first to arrive, Vera Claythorne (Justine Summers) and Philip Lombard (Noah Steurer) seem perfectly nice and have an instant attraction to each other. Summers is practical and honest, with a dab of secrecy mixed in. Lombard plays the devil may care rakish type nicely, inserting quips as the body count rises.

Further confessions reveal some facades that don’t hold up. And as they realize that escape off the island is impossible and there is no one else but them…furtive glances all around!

The ingenious plot is driven by the poem over the fireplace mantel, describing each death in order:

Ten Little Soldier Boys went out to Dine, one choked his little self and then there were nine.

Nine  Little Soldier Boys stayed up very late; One overslept himself and then there were eight.

Eight  Little Soldier Boys travelling in Devon; One said he’d stay there and then there were seven.

Seven Little Soldier Boys chopping up sticks; One chopped himself in halves and then there were six.

Six  Little Soldier Boys playing with a hive; A bumblebee stung one and then there were five.

Five Little Soldier Boys going through a door; One stubbed his toe and then there were four.

Four Little Soldier Boys going out to sea; A red herring swallowed one and then there were three.

Three Little Soldier Boys walking in the zoo; A big bear hugged one and then there were two.

Two Little Soldier Boys sitting in the sun; One got frizzled up and then there was One.

One  Little Soldier Boy left all alone; He went and hanged himself and then there were none.

(Use it as a scorecard for the show!)

The action and body count continues at breakneck speed, with only a few stumbles. Anthony Marston (Matt Leyendecker again) is the race car playboy, Emily Meyers is Emily Brent, a positively unlikeable puritan woman of old tastes and values, whose fine turn with Vera is notable. William Blore (Kirk Patton Jr.) is the uncouth constable who gamely provides the driving investigative force behind the survivor’s situation. His dust ups with Lombard provide dramatic highlights. But is he all that he seems?

Sir Lawrence Wargrave (Ken Kemp) is a judge who tries to put things in perspective for the group, a voice of reason. An area stage veteran, Kemp is easy to listen to in his modulated voice and stately manner. Dr. Armstrong (Vince Terlep) portrays a nervous man with a troubled past. Terlep holds up until he… sorry I can’t say.

General Mackenzie, played by Steven Malone is wonderfully cast and shows the anguish of the betrayal of his wife and his actions. Producer Emily Meyers and Director John Nunemaker are glad to be back in person and their handling of the details and nuance of this show is impressive. The urgency of a 1940s noir is evident.

A note on safety: Yes for screams and gunshots and yes for Covid precautions as patrons are distanced in the spacious theatre and masks are in use and required.

Do come to see “And Then There Were None at Kensington Arts Theater. There’s really no escaping it!

Running Time: Two hours and 20 minutes with a 15-intermission.

“And Then There Were None” is presented by Kensington Arts Theatre from August 6-17, 2021 at Kensington Town Hall, 3710 Mitchell Street, Kensington, MD. For tickets or information about other shows in the season, call the box office at (240) 447-9863 or online.