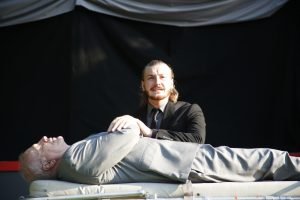 Hamlet, played by Colin Maher, mourns the untimely death of his father, played by Rick Thompson and vows to have his revenge.

Prior to this past Thursday night, I had forgotten just how absolutely breathtaking the entire experience of seeing an outdoor Shakespeare production  at St. Mary’s Historic can be. The entire ambience — from the beautiful waterside view of the Potomac, the softly whistling trees, and the extraordinary stars above (if you reside in the suburbs, you understand how refreshing this site can be) — is completely all encompassing. Beyond just the environment of such an awe-inspiring setting, the Newtowne Players have yet to disappoint with their dedication and care to every detail of their outdoor productions each summer. I have the utmost admiration for how well they are able to utilize such a unique venue for their plays. Their current production of “Hamlet” did not disappoint.

At the end of the play, I couldn’t help asking myself if there may have been something more to their friendship that was simply not spoken. I adore when a director can cause me to see something in a familiar source material that I had not otherwise noticed in prior interactions with it.

As much of a household name as “Hamlet” is, many people may not be familiar with the actual story of the play. It begins with the death of Hamlet’s father, the king of Denmark. Whilst out one night with friends, Hamlet happens upon a ghost of his deceased father who insists that Hamlet must avenge him. From there, the audience follows Hamlet on an emotional journey rife with heartbreak, madness, and cruelty. What makes “Hamlet” unique when compared with other plays written during the same time period is in its dramatic structure. Shakespeare sought to tell the story through Hamlet’s thoughts and desires, instead of through elaborate action sequences. This in turn produces immeasurably compelling performances from its lead characters.

Randy Tusing frames this production with utterly impeccable creative direction. I’ve found that Shakespeare’s plays can either be painstakingly tedious or divinely enthralling, both of which are determined by each decision that the director makes during development. I am delighted to report that this production was the latter. Tusing made the intriguing, authentic choice to cast Hamlet’s close friend Horatio with an actress instead of an actor (played skillfully by Kate Donnelly). He also directed their physical interactions to contain a level of emotional intimacy that brought a palpable depth to their relationship. At the end of the play, I couldn’t help asking myself if there may have been something more to their friendship that was simply not spoken. I adore when a director can cause me to see something in a familiar source material that I had not otherwise noticed in prior interactions with it. Tusing excels at this artistic feat, along with his ability to pull the story into the 21st century through judicious usage of technological and culturally relevant additions (smart phones, Rosencrantz and Guildenstern being transformed into fraternity level bros, etc.)

Jay Mckulka delivers adequate sound, even with all of the obstacles that come with performing outside in a large field. The background music used during certain sequences really assisted in heightening the emotional pull of the story. Tom Mccarthy did a fantastic job with gradually bringing up the lighting to coincide with the sunset, in order to reduce strain on the viewer’s eyes. Janet Cooper’s thoughtful costuming choices further enhanced Tusing’s directorial choices by tailoring specific fashion styles to each character. This is most evident in the goofy characters of Rosencrantz and Guildenstern (played by the hilarious duo of Rick Brown and Noah Busby, respectively) who were dressed in t-shirts with tuxedos drawn on them instead of suits during a funeral in the opening sequence.

I could easily spend the next several paragraphs pouring over the outstanding performances of the entire cast of this play, but I will spare you that insane amount of reading by saying this: each actor in this production emanates passion and fire with their performances. It’s refreshing to witness such artful dedication to Shakespeare in a community theatre setting. It’s a rarity, and for that, I am eternally grateful to the Newtowne Players for continuing to bring their “A” game this summer. Of particular note, Colin Maher floored me with how well he executed the lead role of Hamlet. I had no idea that an actor could make me empathize with such a multifaceted character as Hamlet. When he begins to feign madness, I felt real, guttural anguish as an audience member at his failings and suffering. Maher is truly a force to be reckoned with. He kept reminding me of a mix between Tom Hiddleston and a young Heath Ledger, circa “A Knight’s Tale.” Here’s hoping Southern Maryland will be fortunate enough to get to see more of him in future productions.

I’ll skip the usual rhetoric of should you or shouldn’t you go see this production. You absolutely should, regardless of if you’re normally a fan of Shakespeare. “Hamlet” tells a timeless story of vengeance, loss, heartbreak, and betrayal that we all can relate to in some capacity or another. As long as you’re fine with some of the more mature content that it contains (do remember that Shakespeare was known for his bawdy sense of humor, along with violent themes), then this production is a must-see this summer as the local theatre community of Southern Maryland is in the early stages of reigniting live theatre.

Runtime: Approximately 2 hours and 45 minutes with one 15-minute intermission.

Content Advisory: Recommended for 13+ for themes dealing with suicide, murder, and sexual innuendo. There is also minor cursing.

“Hamlet” runs through August 21, 2021, St. Mary’s Historic in partnership with the Newtowne Players. For more information and to purchase tickets, please visit their website here.