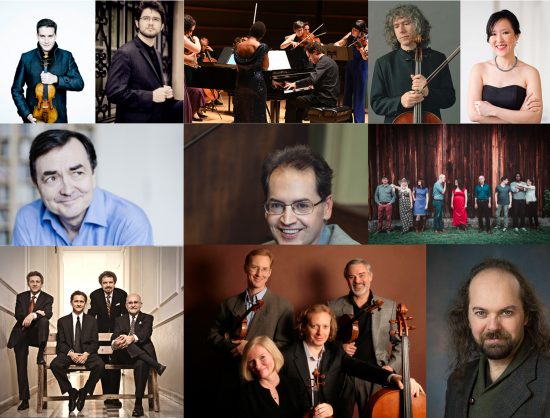 COLUMBIA, MD (August 31, 2021) — Columbia’s Candlelight Concert Society is excited to announce a return to the stage for the 2021-2022 season of its nationally recognized Chamber Music Series, which features eight of the world’s most notable soloists and chamber music ensembles.

Season Highlights Include: Piano recitals by two widely acclaimed pianists: Pierre-Laurent Aimard, a French musical visionary known for his interpretations of Beethoven’s piano concertos, and Dénes Várjon, a Hungarian pianist “with expressive playing and a poetic vision.” (The Washington Post)

We are so thrilled to welcome our audiences and artists back to our concert venues after such a difficult time for our communities, says Candlelight’s Artistic Director Irina Kaplan Lande. “Experiencing great live music all together again will be such an overwhelming joy, and I encourage everyone to join us.”

Tickets go on sale Saturday, September 7, 2021 at www.candlelightconcerts.org or by calling (410) 997-2324. Subscription packages can be purchased for eight-, six- and four-  concert combinations. (See below for further details.)

“(Kristóf Baráti) commands attention for the music… (and) executed it all with remarkable tone, articulation, and detailed expression.” (The Aspen Times)

Hungarian violinist Kristóf Baráti is recognized across the globe as a musician of extraordinary quality with a vast expressive range and impeccable technique. He brings eloquence to his playing, especially in works by Mozart, Beethoven, and Brahms.

“Rabinovich plays with a warm and generous tone and a supple touch. His sense of rhythm is tastefully elastic, the pulse of his playing more akin to breathing than metronomic.” (Cleveland.com)

Highly lauded by The New York Times, BBC Music Magazine, and the San Francisco Classical Voice, American pianist Roman Rabinovich has earned critical praise for his explorations of the piano music of Haydn.

Together, Baráti and Rabinovich present a program of pieces built on musical friendships: Brahms composed his Thun sonata after a collaboration with contralto Hermine Spies, weaving themes from her songs into a luxurious piece for violin and piano. Bartok wrote Rhapsody No. 1 for his friend and virtuoso violinist Joseph Szigeti who gave the premiere performance with orchestra in 1929. And Beethoven wrote his Sonata No. 9 for friend and violinist George Bridgetower, who sight-read the sonata for the premiere performance.

This program is noted for both its technical difficulty and broad emotional scope.
Brahms: Violin Sonata No. 2 in A major, Op. 100 “Thun”
Bartok: Rhapsody No. 1
Beethoven: Sonata for Violin and Piano, No. 9 in A major, Op. 47 “Kreutzer”

The eminent, Israeli-born pianist Shai Wosner joins forces with ECCO — a conductorless ensemble featuring 17 leading soloists and chamber musicians of today’s younger generation, many of whom are principals in major American orchestras as well as leaders of internationally renowned quartets. Their collaborative program melds the baroque and contemporary, interspersing beloved Bach concertos with compelling new works by Brett Dean, Andrew Norman, and ECCO violinist Michi Wiancko. This tour will mark the third collaboration of these artists – they are partners who genuinely share in the joy of music making.

The program weaves beloved works by Bach with new works written as tributes to Bach’s own pieces. Dean’s Approach: Prelude to a Canon is meant to be performed as an introductory movement to Bach’s Brandenburg Concerto and Wiancko’s Blue Bourée is a tribute to Bach’s first cello suite, while Norman’s Gran Turismo explores the legacy of baroque string virtuosity.

British cellist Steven Isserlis frequently appears with the world’s leading orchestras and conductors, including the Berlin Philharmonic, National Symphony Orchestra Washington, London Philharmonic, and Zurich Tonhalle. He is also a children’s book author, publishing Why Beethoven Threw the Stew and Why Handel Waggled His Wig in 2006.

Canadian pianist Connie Shih has appeared extensively with orchestras throughout Canada, the United States, and Europe.

Their program of pieces by Russian master composers features luxurious melodies rooted in the Russian folk song tradition. When each piece received its premiere performance, the composers themselves were at the piano to accompany their friends and colleagues on the cello.

This evening of fantasies, pieces rooted in improvisation and the abandonment of strict musical form, will stretch your musical imagination. Ranging from anguished to jovial, the spectrum of emotional and musical colors is a highlight of this program.

Hungarian pianist Dénes Várjon’s sensational technique and deep musicality have made him one of the most exciting and highly regarded pianists on the international stage. As a soloist he has been a welcome guest in concert series and festivals such as New York’s Carnegie Hall, Vienna’s Konzerthaus, and London’s Wigmore Hall.

Várjon’s exceptional artistry will be on full display in this program spanning the baroque to the romantic. A highlight is Schumann’s Fantasie in C major, which was dedicated to Franz Liszt and of which Liszt wrote: “I am really proud of the honor you have bestowed in dedicating to me so grand a composition.”

Roomful of Teeth is a GRAMMY award-winning vocal band dedicated to reimagining the expressive potential of the human voice, making NPR’s “The Best Music of 2020: NPR Staff Picks” and “The 100 Best Songs of 2020” lists and being featured on Bandcamp’s “Best Contemporary Classical Albums of 2020” list.

Their program Rough Magic explores the delicate, diverse connections between language and expression with each piece transporting the audience through tenderly emotional highs and lows. Of note is Caroline Shaw’s The Isle, which pushes harmonic boundaries by featuring a 24-chord progression of all major and minor triads of the Western 12-note system.

Shin: bits torn from words
Beglarian: None More Than You
Brittelle: Psychedelics
Shaw: The Isle

Cuarteto Latinoamericano
In a program of Mexican Art and Music
Saturday, April 23 at 7:30
(Smith Theatre at Howard Community College)

“Not only do the members of this ensemble play with a rapport that verges on telepathic, but they investigate a repertoire of which most other such groups evidently are ignorant.” (The Pittsburgh Press)

Cuarteto Latinoamericano’s adventurous program delves into Mexico’s cultural heritage by showcasing the intersections between painting and music. Of creating music which is based on folk music from Mexico, Ponce once said, “I consider it the duty of every Mexican composer to ennoble his country’s music by giving it artistic form, attiring it in the garb of polyphony, and lovingly conserving the popular music that is the expression of the country’s soul.”

Enjoy commentary by Benjamin Juárez Echenique, a noted Mexican cultural scholar and professor at Boston University, to learn about the thematic and ideological relations between artists such as Diego Rivera and Frida Kahlo as you listen to masterpieces from great Latino composers.

American String Quartet is best known for its “luxurious, beautifully sculptured performances” (The New York Times). Internationally recognized as one of the world’s finest quartets, it has spent decades honing the sound for which it’s famous.

In its 47 years as an ensemble, the quartet has appeared in the most important concert halls worldwide and presented the complete quartets of Beethoven, Schubert, Schoenberg, Bartók, and Mozart. It was hailed by The Washington Post for presenting a program that was “played as skillfully as it was constructed, with a finely calculated ensemble sound in which each player showed considerable individuality but all blended their strengths into a fine balance.”

Octavio Vazquez is a composer noted for creating neo-romantic music which is “…a burning torch for the next century” (New Music Connoisseur). He is most passionate about composing music that delivers an “emotional impact and direct communication with the listener.” He takes the stage with American String Quartet to perform his own piece, Piano Quintet.

Vazquez’s Piano Quintet relates to a late 15th-century event in his native Galicia. The piece explores themes of forced displacement, intolerance, and violence against “others” in relation to the historical persecution of Jews beginning in 1492 with the signing of the Alhambra Decree.

George Walker’s Lyric for Strings was written to honor the memory of his grandmother. It has become one of the most frequently performed pieces by an African American composer.

In this final concert of the season enjoy American String Quartet’s opulent sound in repertoire spanning over more than 100 years of compositional excellence.

Accessible seating can be reserved online.
To purchase tickets by phone, please call 410-997-2324.
With the purchase of one adult ticket, an accompanying child up to age 17 will receive a ticket free of charge.
New this year for Candlelight Concert Society: all seating will be assigned.

Since 1972, the Candlelight Concert Society has presented world-class chamber music featuring guest artists from around the globe. Based in Columbia, Maryland, CCS has grown into a nationally recognized cultural institution with global resonance. In addition to its renowned Chamber Music Series, it offers CandleKids programs to spark children’s interest in the performing arts; Educational Outreach programs to build an audience for the future through performances, lectures, workshops, and master classes; and Community Outreach performances for Howard County residents unable to attend in a formal concert setting.
For more information, visit www.candlelightconcerts.org.