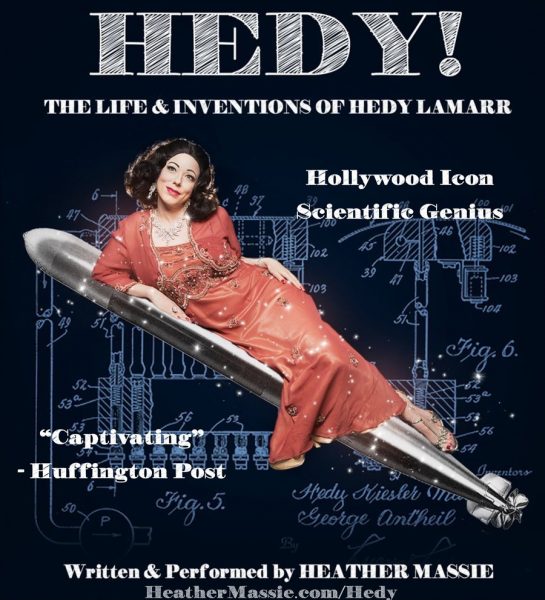 WHEN: Sunday, October 10, 2021. Doors Open @ 6:00 pm, Show @ 7:00 pm
WHERE: The State Theatre, 325 St. John Street, Havre de Grace, MD 21078
For more information and tickets, click here.
AGES: Any attendees under 18 must be accompanied by an adult at all times. Show suitable for ages 12 and up.
SHOW WEBSITE
Food & Bar specials by Laurrapin Caters will be available for purchase. MENU can be found here.

“HEDY: The Life & Inventions of Hedy Lamarr” celebrates the unexpected scientific genius of Viennese-born, Hollywood screen siren and inventor Hedy Lamarr. Known as the “Most Beautiful Woman in the World,” Lamarr spent her spare time in Hollywood inventing technology for torpedoes during WWII. Also known as Frequency-Hopping Spread Spectrum Technology, her invention is used today in cell phones, WiFi, GPS, and Bluetooth. Portraying 36 characters in this solo play, Massie enchants the audience as Hedy Lamarr, along with Jimmy Stewart, Bette Davis, Louis B, Mayer, among others. Hedy is summoned to unearth the truth behind how a glamorous actress could create an invention which launched today’s wireless technology revolution. The show premiered Off-Broadway in 2016 on Theatre Row, and has since toured throughout the United States, Ireland, Northern Ireland, Zimbabwe, South Africa, Sweden, Ukraine, Italy, and Iceland, garnering 19 awards and critical acclaim. Written and performed by Heather Massie, the show’s mission is to inspire audiences to pursue their passions, especially to encourage young women in science and technology, and to establish Hedy Lamarr as a role model for intelligence, ingenuity, and invention.

Heather Massie marries her love of art and science in the person of Hedy Lamarr. Massie studied astrophysics at the University of Virginia with dreams of becoming an astronaut. She then studied theatre arts at the Virginia Tech School of the Arts and become a professional actress in NYC and throughout the U.S. She has toured the world with “HEDY: The Life & Inventions of Hedy Lamarr,” bringing the it to theaters, arts festivals, science festivals, science centers, technology conferences, museums, universities, schools, Jewish centers, STEM & STEAM Events, and cultural and scientific organizations throughout the United States and around the world. In 2019, she served as a Fulbright Specialist with a tour of the show through South Africa sponsored by the U.S. State Department, World Learning, and the U.S. Embassy South Africa.