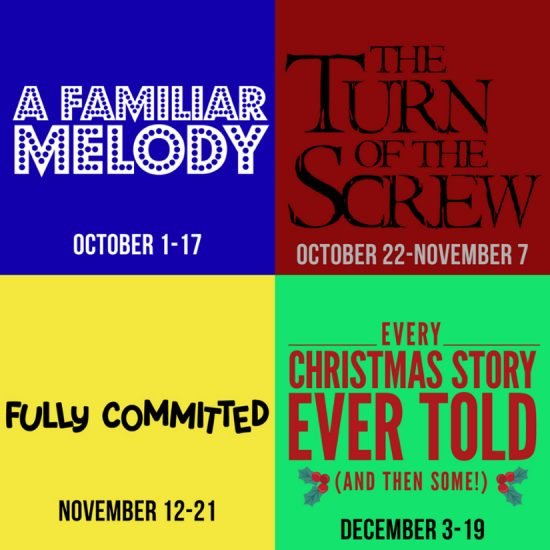 Herndon, VA/Washington, DC – Producing Artistic Director Evan Hoffmann has released NextStop Theatre Company’s revised schedule of programming for Fall 2021. The new schedule will feature an eclectic array of four new, smaller productions, which have been conceived to better meet and serve the company’s two equal objectives of bringing live theatre back to the Dulles Corridor, while simultaneously protecting the health and safety of the community.

After initially announcing an ambitious Fall season featuring three large productions, NextStop decided (in August) to postpone two of the three productions due to the resurgence of Covid-19 cases, caused by the Delta variant. After a short delay, NextStop reopened after nearly 18 months with the comedy, ” An Act of God” by David Javerbaum, on August 20th. The production was met with both audience and critical acclaim, as well as with several important, new safety measures in place; including a nearly 50% reduction in audience capacity, a proof of vaccination requirement, and a masking requirement for both audiences and staff.

“We were devastated to have to make the difficult decision to postpone our original plans for this Fall. Like so many others, we truly believed that our community was turning the page on Covid and ready to get back to normal,” said Evan Hoffmann, Producing Artistic Director. “But the health and safety of our community remains our highest priority and we will not compromise on that commitment. We remain ready and eager to return to full-scale productions when conditions seem right. But in the meantime, we are excited to have created a path forward that makes live theater possible and keeps safety at the forefront.”

Following the successful closing of “An Act of God” on September 19, NextStop is wasting no time and will reopen next week with “A Familiar Melody,” an evening of music created specifically for NextStop’s audiences and featuring nearly two dozen songs from beloved Broadway and movie musical hits like “Cinderella,” “Ain’t Misbehavin,’” “Waitress,” “Ragtime,” “Company,” “Little Shop of Horrors,” and “A Star is Born.” The show will star NextStop veterans Alex De Bard (“First Date”), Ricky Drummond (“The Wedding Singer,” “Urinetown”), Katie McManus (“Into the Woods,” “City of Angels”), and Marquise White (“A Grand Night for Singing”). “A Familiar Melody” is directed by Ashleigh King and music directed by Elisa Rosman. The production will run weekends from October 1 through October 17, 2021.

Just in time for Halloween, NextStop will stage “The Turn of the Screw.” Adapted by Jeffrey Hatcher from the story by Henry James, this classic ghost story depicts the trials of a young governess, haunted by ghosts while caring for two orphaned children on a remote estate in the English countryside. This innovative adaptation is a spine-tingling, tour de force for two actors and will be directed by Christopher Richardson. “The Turn of the Screw” will run weekends from October 22 through November 7, 2021.

In November, the laughs will return to NextStop with the hilarious, one-woman comedy, “Fully Committed,” by Becky Mode. This devastatingly funny show follows a day in the life of Samantha, an out-of-work actress who works the red-hot reservation line at Manhattan’s number-one restaurant. Coercion, threats, bribes, histrionics—a cast of desperate callers will stop at nothing in their zeal to land a prime reservation or the right table. NextStop favorite, Jaclyn Young (“Crimes of the Heart,” “The Wedding Singer,” “The Sidekick’ Cabaret”), will take on 40 roles in less than 80 minutes, under the direction of Jennifer Redford. “Fully Committed” will have a limited, two-weekend run from November 12-21, 2021.

Finally in December, NextStop will celebrate the holiday season with “Every Christmas Story Ever Told (And Then Some!)” by John K. Alvarez, Michael Carleton, and James FitzGerald. In the tradition of NextStop’s hit production of 45 Plays For 45 Presidents, this fast, furious, and slightly irreverent look at holiday classics and traditions puts three performers to the test. Santa Claus, Rudolph, the Grinch, and just about every other seasonal character you can think of make an appearance in this racy comedy that will have you laughing all the way to the New Year! Producing Artistic Director Evan Hoffmann will direct. “Every Christmas Story Ever Told (And Then Some!)” will run weekends from December 3-19, 2021.

All of the productions in this new schedule have been carefully chosen to enable NextStop to balance providing great entertainment and ensuring the highest possible degree of safety for the audience, the artists, and the NextStop staff. Building on the artistic, as well as the health and safety successes of An Act of God, each production will feature a small cast, utilize a specially designed repertory set that ensures performers remain at least six feet from the audience at all times, and each will run between 75-90 minutes in length (in order to remove the need for an intermission.)

NextStop will also continue to leave in place their current policies requiring proof of vaccination, mask wearing at all times in the building (with the exception of performers on stage), and a nearly 50% reduction in capacity (in order to allow for audience distancing.) NextStop Theatre Company remains fully committed to placing the health and safety of their staff, artists, and community above all else. As such, NextStop maintains the right to cancel any performances and/or productions, at any time, should circumstances prove necessary. NextStop will offer full refunds in the event of cancellation and/or should a patron become uncomfortable with attending a live performance.

Nothing can soothe the soul like live music! Four past NextStop musical theatre stars (Katie McManus, Alex De Bard, Ricky Drummond, Marquise White) come together for an evening of Broadway and movie musical hits, including songs from Cinderella, Ain’t Misbehavin’, Waitress, Ragtime, Company, Little Shop of Horrors, A Star is Born, and so many more beloved classics!

A Victorian era governess is hired to work at an estate and care for two orphaned children. After learning about the deaths of her predecessor and the former groundskeeper, the governess is haunted by the images of their ghosts. But are the ghosts real or merely figments of her imagination? A classic ghost story comes to NextStop just in time for Halloween!

This devastatingly funny show follows a day in the life of Samantha, an out-of-work actress who works the red-hot reservation line at Manhattan’s number-one restaurant. Coercion, threats, bribes, histrionics—a cast of desperate callers will stop at nothing in their zeal to land a prime reservation or the right table. Amid the barrage, Sam’s got her own needs to contend with. While juggling scheming socialites, name-dropping wannabes, fickle celebrities, and egomaniacal bosses, can she manage to look out for herself?

Every Christmas Story Ever Told (And Then Some!)
Directed by Evan Hoffmann
By John K. Alvarez, Michael Carleton, and James FitzGerald
Original music by Will Knapp

Instead of performing Charles Dickens’ beloved holiday classic for the umpteenth time, three actors decide to perform every Christmas story ever told—add a sprinkling of Christmas traditions from around the world, seasonal icons from ancient times to contemporary pop-culture, and every carol ever sung—and you’ve got a madcap romp through the holiday season. A fast, furious, and slightly irreverent look at holiday classics and traditions. Santa Claus, Rudolph, the Grinch, and just about every other seasonal character, make an appearance in this racy comedy that will have you laughing all the way to the New Year!

NextStop is supported in part by generous grants from ArtsFairfax, The Community Foundation for Northern Virginia– Seeley Fund, The Council for the Arts of Herndon, The Nelson J. & Katherine Friant Post Foundation, The Ruth & Hal Launders Charitable Trust, The Town of Herndon, and The Virginia Commission for the Arts

ACCESSIBILITY: NextStop Theatre is accessible to persons with disabilities. Wheelchair accessible seating may be purchased online or by calling the box office.