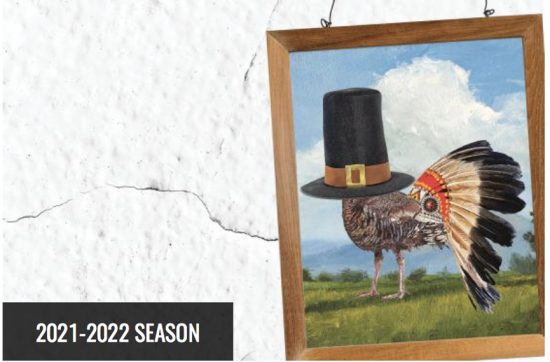 This return to the stage is also a homecoming for the cast of The Thanksgiving Play, featuring a quartet of actors returning to Olney Theatre. Megan Graves (Oil) is Logan, a high school drama teacher charged with creating a Thanksgiving play for the school district that satisfies the parents calling for her ouster and meets the criteria of a Native American Heritage Awareness Month grant. Parker Drown (A Chorus Line) is Jaxton, her yoga-bro friend who aggressively wants everyone to know how sensitive he is to the politics of representation. David Schlumpf (Elf, South Pacific) is Caden, an elementary school history teacher enthralled with playwriting and historical accuracy, and Dani Stoller (The Crucible, The Humans) is Alicia, an  “authentic” indigenous actor from L.A., whose appearance is underwritten by the aforementioned grant. The result is a comic quest to represent the story of a people who are excluded from the actual creation of that story. While the laughs come quickly,. FastHorse’s play asks probing questions about the limits of white liberals’ best intentions.

The show is directed by Raymond O. Caldwell, artistic director of DC’s innovative and acclaimed Theatre Alliance. Born in Wiesbaden, Germany and raised all over the world, Raymond O. Caldwell (he/him/his) is an award-winning director who has directed for Round House Theatre, Imagination Stage, Mosaic Theater, The Kennedy Center, National Players/OTC, Solas Nua, CulturalDC, and the Hegira. Prior to leading Theater Alliance, he was a faculty member and resident director in Howard University’s Department of Theatre Arts for six years, and spent six seasons as the Community Engagement Partnership Manager at Arena Stage.

VACCINATION POLICY
Masks and proof of COVID vaccination are required at all Olney Theatre performances. Those under 12 who are not yet eligible for the COVID vaccine must be masked and accompanied by a vaccinated adult. At this time, we do not accept proof of a recent negative COVID test in lieu of vaccination. Visit OlneyTheatre.org/vax for more information.

Tickets begin at $54. Discounts are available for groups, seniors, military and students.

Mission
Olney Theatre Center for the Arts produces and curates theatrical performance for the diverse audiences in our community, and educates, learns from, supports and inspires a more inclusive generation of theater-makers.

Vision
We strive to become an arts and culture powerhouse, redefining the American regional theater movement by cultivating and sharing the creativity of our community.

History
Founded in 1938 as a summer playhouse, Olney Theatre Center (OTC) now produces year-round world and American premieres of plays and musicals, and reimaginings of familiar titles; presents the work of leading companies; tours nationally and locally; teaches students of all ages; and mentors the next generation of theatremakers. For more than 8 decades, OTC has brought impactful theater performance and education to our community, helping to grow the vibrancy and vitality of our home in central Maryland.

Olney Theatre is now the cultural anchor of a rapidly changing region and serves one of the most diverse, best educated, and wealthiest counties in the country. Situated on the unceded land of the Picataway-Conoy people, the Olney area was once a rural farming community with a unique Quaker heritage. Now the area is occupied by every kind of family that makes up 21st Century America, along with major corporations, shopping districts, civic associations, non profit organizations and a diverse collection of houses of worship.  Montgomery County’s 1 million residents play a dynamic role in the Baltimore-Washington corridor, and is a driving force behind the region’s creative economy.

As of September 2021, Olney Theatre Center employed 40 full time staff, 20 part-time positions, 26 early career apprentices and players, and more than 400 professional artists. The Theatre intends to continue expanding to better meet the needs of our community.