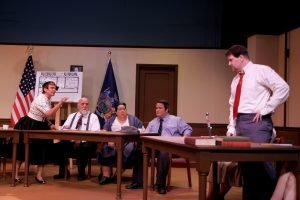 The jurors deliberate over the details of the case. From left to right: Kim Bessler, David Ludy, Carol Charnock, Michael Beryle, and David Timmerman. Photo by Jason Klonkowski.

One of the most beautiful facets of live theatre is its ability to spotlight currently relevant topics that plague our world and shine an illuminating light of truth on them. While I believe that theatre should, at times, provide an escape, there is something truly refreshing about a piece that can elicit far more complex emotions from its viewer. This past Monday night, I was honored to preview a live production of “12 Angry Jurors” at the Port Tobacco Players (PTP) that achieved just this.

“Although written more than half a century ago, the subject matter feels painstakingly relevant for today’s audience.”

The intriguing thing about “12 Angry Jurors” (more commonly known as “12 Angry Men” when not performed as gender-neutral) is that it was originally written in 1954 as a teleplay. It later became a movie in 1957 and then a stage play in 1964. Although written more than half a century ago, the subject matter feels painstakingly relevant for today’s audience. “12 Angry Jurors” tells the story of a criminal trial in which a young man has been accused of murder. The jury must deliberate on whether or not he will be found guilty and possibly sentenced to death. When the play begins, only one of the twelve jurors believe that he is not guilty. In order to avoid a hung jury, the rest of the show revolves around the one juror attempting to persuade the others by reexamining all the evidence in the case. Along the way, the jurors are forced to also examine how their own internal biases may affect how they view the facts.

Michael J. Gahan III serves as the director for this production and it is quite evident how much he understood the importance of choosing a show of this magnitude in light of recent historical events that have unjustly occurred in our nation. I recall watching a movie adaptation of this show when I was in high school, and automatically assumed that the defendant on trial was a person of color. The man’s exact appearance is never mentioned, but the vitriol that spews from one of the jurors (intensely played by Tom Charnock in this production) paints an entirely different picture. Gahan did an excellent job of harnessing the raw emotions of his actors in order to convey a wide range of authentic humanity that everyone can relate to on some level or another. His methodically strategic blocking pulled  me into the story every step of the way. There was never a moment in which I felt overwhelmed by the number of actors on stage (which is a miracle considering there were always at least 12 actors perfroming during the majority of the show).

This show is a spectacular example of the ideal, one-act ensemble show. Instead of telling a lengthy story that spans days, months, or years, plays like this focus on the characters and one singular topic. This format hinges on the talent of the actors. While each of the actors worked together as a cohesive unit, there were two actors who stood out—David Timmerman as Juror 3 and Kim Bessler as Juror 8. Timmerman and Bessler do an excellent job of playing off of each other. The tension that the two of them created was palpable, expertly displayed in a heated exchange they shared that furthered the discussion amongst the jurors. I was on the edge of my seat and had quite a visceral reaction to it all. Timmerman plays an ego-driven man who feels that he has been wronged by everyone around him and only he alone can set it right. He does a fantastic job of tapping into a stereotype each of us has probably encountered in our lives at one time or another. Meanwhile, Bessler embodies the voice of the audience. She insists on rationality, the opposite of what Timmerman’s character is. From start to finish, each of their performances was captivating.

The set as designed by Chris Magee was a simple room with a large table at the center. Small touches such as a fan hanging overhead, a water cooler, and a functioning window helped to make the set feel realistic—as if it could have been plucked from any real courthouse. After the performance, I was able to get a view of it from the balcony seats and if you have the opportunity to purchase balcony seats instead of orchestra, you should. The birds’ eye view of the set was incredible and I imagine would only add to the engaging manner of the story. Original music compositions by James Watson also enhanced the production. Strategically inserting the music into parts of the play further emphasized the emotional impact of different moments. Before speaking with the director afterwards, I was certain that the music had come from a previously recorded library of instrumental music. It was an absolute delight to find out that Watson had created it solely for this production.

This play is geared towards the theatre goer who enjoys thinking deeply about a tough subject matter as well as to those who are at least open to it. It is a thought-provoking and enthralling production with a brilliantly written script, and filled with lots of emotion and edge-of-your-seat moments. The current urgency at the heart of this production cannot be missed.

Running Time: Approximately one hour and 30 minutes with no intermission. (The house lights are kept on a low level to allow for audience members take a break if needed).

Advisory: Murder and bigotry. Recommended for 10+ with parental guidance.