Theatre Review: ‘A Night on Broadway’ at The Newtowne Players 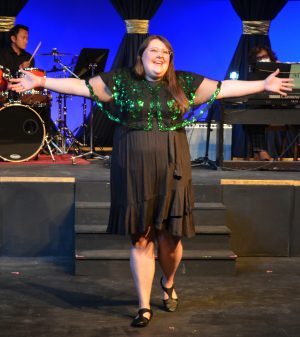 Shelby Miller performs “The Wizard and I” from the musical “Wicked,” the backstory for the two famous witches of Oz.

I am excited to report that The Newtowne Players (NTP) has at long last restarted their indoor theatre productions with its season’s newest production, “A Night on Broadway.” While I truly enjoyed their yearly outdoor Shakespeare production last month, there is something absolutely unparalleled about the indoor theatre experience. The sound feels fuller because of the available acoustics that come with performing on a stage inside of a building; the sets can better adapt to the story’s requirements; and the lighting truly becomes a technician’s artistic playground. The theater also takes on an almost ethereal energy from both the audience and the company that makes the performance almost intoxicating to experience. I believe this is even further enhanced given how cooped up we’ve all been over the past year and a half.

“Gravelle’s theme was just what I believe we all need right now—hope and a good, soul healing laugh.”

“A Night on Broadway” has become a yearly event for the NTP due to the high demand year after year. Each year, a different theme is selected by the director around which all of the curated Broadway songs are centered. Director Sarah Gravelle chose “Songs that Uplift, Inspire, and Entertain.” Throughout the night, there were numbers from fairly recent shows, such as the critically-acclaimed (and one of this reviewer’s top ten favorites of all time), “Come From Away,” to a song from a more seasoned show like “Annie Get Your Gun.” I really appreciated the variety of the song selection. Even if one song wasn’t my cup of tea, I knew there would be one coming up that would be. Gravelle’s theme was just what I believe we all need right now—hope and a good, soul healing laugh.

The simplicity of the set, designed by Jay Mckulka, fit the nature of a show to absolute perfection. It was a simple, two-tiered black set with New York theatre district accents. Sometimes less is more, and in this case, it definitely was. Lighting design by Dave Kyser helped reinforce the theme with pleasing pops of color for the set’s backdrop. A judicious use of spotlighting assisted in emphasizing certain performance choices by the actors. The overall sound quality was kicked up a notch from past productions. NTP also installed a proper proscenium arch over their stage during their hiatus which looked stunning.

It was wonderful to see just how many new faces there were in the cast. Something that I have always adored about this company is that, while there are always familiar faces in each production, there is always new talent as well. The new actors of note were Richard Lehman, Shelby Miller, and Tony Aina. Lehman killed it with his comedic timing in the number “Shy” from “Once Upon a Mattress.” His physicality and giddy grin were absolutely spot on during the performance. Miller has a beautiful, soulful quality that kept reminding me of the actress Katie Ladner who played Martha Dunnstock in the 2014 off-Broadway show, “Heathers: the Musical.” Her emotional rendition of “The Wizard and I” from “Wicked” was excellent. Aina imbued an intense passion into each of his numbers that had an emotional impact on me as an audience member. His thoughtful interpretation of “Out There” from “Hunchback of Notre Dame” was beautiful from start to finish.

This production can be enjoyed by a range of people. It’s for both the avid Broadway fan who has seen practically everything under the sun and also for those who enjoy the concert aspect of the show. For the most part, all of the song selections were family friendly. A number from “Avenue Q” was a little risqué and a minor curse word was used in a separate song, but the content wasn’t anything that I wouldn’t be willing to take my own young child to. If you’re ready for a carefree, effortless night at the theatre, this is the show for you. Prepare to be entertained as you re-acclimate to live, indoor theatre.

Approximate run time: Two hours and 30 minutes with one intermission.

“A Night on Broadway” runs through September 26, 2021, presented by The Newtowne Players at the Three Notch Theater, 21744 S Coral Dr, Lexington Park, MD 20653. For more information and to purchase tickets, please visit their website here. NTP is currently adhering to CDC recommended indoor mask protocols, and therefore require mask usage by all patrons.