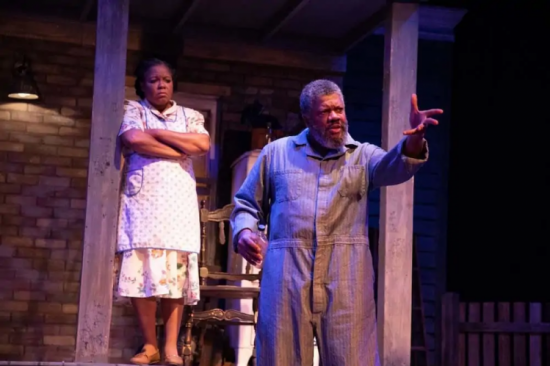 The Little Theatre of Alexandria blew the roof off the building this past Wednesday with their production of August Wilson’s “Fences.” The production is taut, layered, and deserving of the standing ovation it received that evening.

This staging is also framed and supported by a beautifully detailed set design by Matt Liptak, with lighting by Ken and Patti Crowley. These two supporting factors, as well as the set decoration, sound design, and costume design, all play seamless roles in making this an excellent production.

…taut, layered, and deserving of the standing ovation it received that evening…a talented cast that brings this story to riveting life. This is a don’t-miss production.

“Fences” is a deceptively simple play. It is a slice of life in the early 1950s, centering on a garbage collector who used to be a star in Negro league baseball but never made it to the major leagues due to institutionalized racism. Troy Maxson (a commanding Albert Bolden) also served 15 years in prison for a murder during the commission of a robbery. Now 53, he is reflecting on his life and legacy, and growing more embittered by the choices he was denied. Things are brought to a head by his son, a high school senior who wants to pursue a career in football, and who might have a chance — the chance denied his father. His bitterness starts infecting all of his relationships. In spite of that, he manages to cross a color barrier and become the first Black driver of a garbage truck in Pittsburgh (the play is the sixth in Wilson’s 10-part “Pittsburgh Cycle”) — a minor victory he relishes.

It’s a beautifully written piece, and the cast does it full justice. Troy’s wife Rose (Brenda Parker), his teenage son Cory (Jared Diallo), and his brother Gabriel (Ayyaz Chouhury) form the core of the story. The other major relationships are with his first son Lyons (Mack Leamon), a jazz musician, and his best friend, Jim Bono (DeJeanette Horne), who also works at the trash collection agency. Raynelkl (Maya Bolden) is his unexpected last child. We are introduced to her in the final section of the play when she meets Cory whom she hasn’t seen since she was a toddler.

From the moment he enters, Bolden commands the stage as Troy. He’s bombastic, a little bitter, confident, and inarticulate about his insecurities, which he has buried deep. His grounding is Rose. Parker inhabits Rose as if she were an alter ego. At the start, she seems rather naive, house-proud, and happy to play second fiddle to her larger-than-life husband. As the scenes build to the second act, you realize that she’s the bedrock that Troy stands on. When he finally cracks that bedrock, she takes the steel underneath and unapologetically does what she has to to survive with grace and dignity — and to protect the baby, Raynell. Rose becomes a queen.

Choudhury is riveting as Gabriel. He’s a damaged war veteran (head injury) who lives in his own world and spins beautiful and oddly compelling stories about St. Peter and heaven. He moved out of his brother and sister-in-law’s little house (which his money actually paid for) and rented a room to have some independence. His performance is nuanced and astute.

Cory’s story arc sets things in motion. He dreams for a larger life against his father’s failures. Diallo is compelling both as the 17-year-old who chafes at his father’s strictures and manipulations, and downright refusal to just listen to him, and as the young corporal in his early twenties who comes home on leave from his service in the Marines for his father’s funeral and meets Raynell — and finds a way to bond with her. Diallo is still a college student and a young talent to watch.

Although it remains a subtext, the institutionalized racism that Black people experience in America lays underneath everything — where they live; how, when, and where they work; how they interact in a larger world; and how it smothers hope. The characters Wilson created rarely mention it explicitly, but it echoes throughout every line, scene, and in those fences — real and metaphorical. Eleanore Tapscott’s direction is straightforward and subtle, and all the more engrossing for that light touch.

Little Theatre of Alexandria has assembled a talented cast that brings this story to riveting life. This is a don’t-miss production.