Theatre Review: ‘Come From Away: In Concert at the Lincoln Memorial’ Presented by Ford’s Theatre 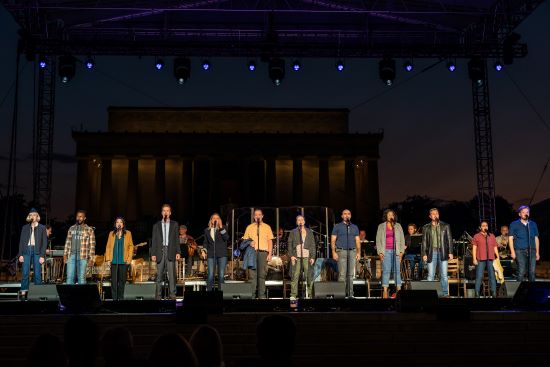 The company of “Come From Away: In Concert at the Lincoln Memorial” perform September 10, 2021, in Washington, D.C. Photo by Scott Suchman.

On Friday, September 10th, thousands gathered alongside the Lincoln Memorial Reflecting Pool for a Canadian musical about American tragedy. On the eve of the somber 20th anniversary, with the Pentagon Tower of Light shining to the south, Ford’s Theatre presented a free concert of “Come From Away.” The musical was nominated for numerous awards and won the Tony for Best Direction of a Musical and an Olivier for Best New Musical in 2017, among others. The musical shares the hope and heartache of a lesser-known chapter from September 11, 2001 — the true stories of planes diverted to Canada when the American airspace closed.

…’Come From Away’ deserves our applause for celebrating human connection, commemorating some of what we lost twenty years ago, and thrilling an audience considerably younger and more diverse than the crowds found in most Broadway theatres.

Operation Yellow Ribbon rerouted over 200 US-bound planes to Canadian airports in the tense hours after the attacks. Thirty-eight of these planes, carrying nearly 7,000 passengers and crew from around the world, arrived in Gander, Newfoundland, population of 9,000. The immense empathy and hospitality the Newfoundlanders gave to these frightened guests shines in “Come From Away.”

The shadow of tragedy and creeping hold of islamophobia grounded the characters and stories that might have seemed too sweet — like persevering optimism of the first female American Airlines captain, Beverley Bass (Julie Reiber), or the budding romance of American Diane Gray (Christine Toy Johnson) and Brit Nick Marson (Chamblee Ferguson), whose real-life counterparts attended Friday’s concert. The unrelenting Canadian kindness and Tony-nominated score of “Come From Away” won over this DC audience who clapped along to the beat, wiped a few well-earned tears, and gave a standing ovation at the finale.

This was a homecoming of sorts. “Come From Away” held its east-coast premiere at the Ford’s Theatre in 2016, ahead of its Broadway opening in 2017, and locally won the Helen Hayes Award for Outstanding Musical, Outstanding Direction of a Musical, and Outstanding Ensemble in a Musical. Much of the concert was stripped down compared to the stage show, with minimal choreography and props, a subdued lighting design, and no set. Screens and speaker decks projected the action from the small stage in front of the Lincoln Memorial steps to the massive crowd arrayed on picnic blankets and camping chairs.

While the sound quality was not what you would get in a theatre, all was audible, even from the middle of the crowd —  except when planes roared overhead. The challenges of presenting an outdoor concert caused some minor glitches in the generally well-timed camera work, briefly leaving the performers and, at least once, the sign language interpreters out of view. Overall, the “Come From Away” concert deserves our applause for celebrating human connection, commemorating some of what we lost 20 years ago, and thrilling an audience considerably younger and more diverse than the crowds found in most Broadway theatres.

Running time: Approximately 100 minutes and is appropriate for ages 10+.

Missed this one-time performance of Come From Away in concert? You can see the full theatrical show streaming on Apple TV+ or catch the Broadway Tour at the National Theatre in April 2022. For more information on upcoming productions from Ford’s Theatre, click here.