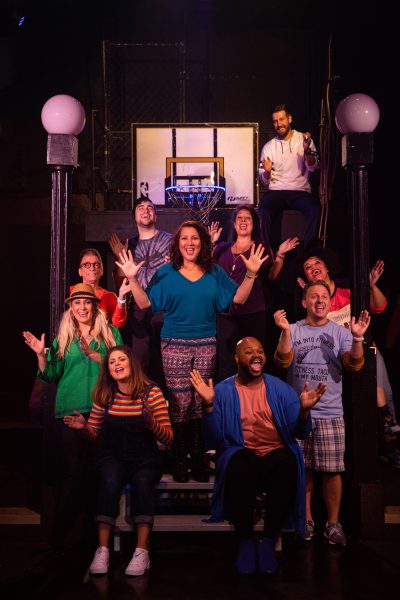 Janine Sunday and the Godspell cast in “Day by Day.” Photo by Jeri Tidwell Photography.

“Godspell,” with music and lyrics by Stephen Schwartz and book by John-Michael Tebelakfirst, opened off-Broadway in May of 1971. It was subsequently made into a film in 1973 and had a revival on Broadway in 2011. Schwartz actually started writing the show while a drama student at Carnegie Mellon University. One of the songs, “Day by Day,” became a Billboard hit. The play consists of characters who act out the parables based on the Gospel of Saint Matthew in the New Testament.

“Godspell” was the first show Toby’s presented 41 years ago. This production is in memory of the visionary, James W. Rouse, the founder of Columbia, Maryland.

I must admit I saw that Off-Broadway production of “Godspell” back in the early 1970s. It was the end of the hippie era and the Viet Nam War was still raging. The musical was very optimistic unlike other rock musicals of its day (“Hair” and “Jesus Christ Superstar”). It typified the Love Generation and probably why it is so enduring. No matter what your religious beliefs, you feel good about the show. That explains why it has been produced all over the world in three different languages.

This is a perfect musical for our time and much needed. Its optimism and message of loving your neighbor as much as you love your god is as meaningful now as it was in 1971. This production captures the jubilance of Schwartz’s musical.

In this production, like many others, the performers enter wearing every day very casual attire. One by one, they shed their outer garments (coats, sweaters, etc.) to clothing that could be from today or the 1970s. One of the actors takes on the role of God (Shane Lowry) while the company sings praises to Him with the number, “Prepare Ye the Way of the Lord,” as the audience joins them, singing and clapping.

Toby’s has updated the show with actors sing into cell phones. Before the song “Save the People,” there is a scene about Judge Judy. Other moments include references to “Family Feud,” Geico, and Uber. The song itself is like a 1960s folk song, led by Lowry as John the Baptist.

The most recognizable song from the show is “Day by Day,” and the company does an excellent job as it starts as a ballad and evolves into a bright and bouncy number. Other highlights are “All Good Gifts” with the incomparable DeCarlo Raspberry leading the group. A cute number, “Turn Back, O Man,” has the irrepressible David James in drag as he and Heather Beck, with the company as the chorus, perform this unusual torch song. With the focus on Crystal Freeman, the characters belt out “O, Bless the Lord, My Soul.” The pace is changed to a soft shoe style number on “All for the Best,” with juggling and basketballs. Justin Calhoun, who heads the cast as Jesus, has a solo “Alas for You” which segues into the more religious part of the show. The talented Jeffrey Shankle sings lead in “We Beseech You” in a more upbeat Broadway-type of melody.

“By My Side” was written by Peggy Gordon with lyrics by Jay Hamburger, and it features the wonderful MaryKate Brouillet using a Western tempo.

The show ends with the crucifixion of Jesus, and Calhoun performs that flawlessly. “On the Willows” follows in a more somber tone (Shankle and Beck). Then, the cast takes us right back to an upbeat rock feeling with the “Finale.”

The rest of this great company includes Tina Marie DeSimone (“Learn Your Lessons Well”) and Janine Sunday. This is truly an ensemble production.

The direction by Mark Minnick and David James helps keep the feeling joyous from beginning to end. Minnick’s choreography is interesting and deft. I really like how the crucifixion was handled. Ross Scott Rawlings does justice to the music covering all genres from gospel to hard rock and those in between. The minimalist set by David Al Hopkins works well with the theme and his lighting design compliments the set well. John Pantazis’ sound design lets the music roll, and Janine Sunday’s costumes fit in perfectly. I particularly thought it was clever to have Jesus wearing a jersey with #1 on the back.

This is a perfect musical for our time and much needed. Its optimism and message of loving your neighbor as much as you love your god is as meaningful now as it was in 1971. This production captures the jubilance of Schwartz’s musical.

Running time: Two hours and 10 minutes with an intermission.

Note: Toby’s Dinner Theatre is joining other entertainment venues in the area by requiring proof of Covid-19 vaccination and ID for verification. Your final vaccination must be 14 days or more from the date of the performance. Children under 12 will have to provide proof of a negative Covid-19 test taken within 72 hours of performance.  Audience members 18 and over must show a photo ID.