Theatre Review: ‘Good People’ at the The Keegan Theatre 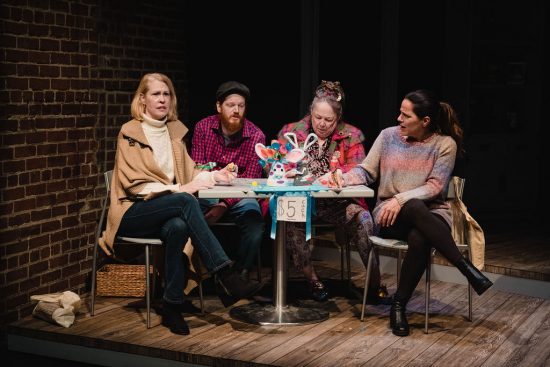 “Good People,” which opens Keegan Theatre’s 25th anniversary season, is a play about rough-edged people — Southies from Boston — who cut right to the chase. That chase is surviving, friendship, family, and never forgetting where you come from. Somehow it hit home more this time around than the last time I saw it (Arena Stage’s excellent production in 2013).

…it’s the scenes between Rhea and Kozemchak that push this play into the must-see category…Director Josh Sticklin has helped his cast find that sweet spot that holds an audience rapt, particularly in the second act.

Maybe it hit home even harder because in the eight years since then, there has been such little progress made on so many fronts, including wages. The main character, Margaret (Susan Marie Rhea in a fireball of a performance) makes a princely $9.20 an hour, and yet is willing to take a pay cut to keep her job. She’s a single mother with a severely disabled adult daughter and her world just crashed around her.

Act 1 is the set-up for the main event in Act 2. Stevie (Joe Baker), the manager, has to fire Margaret for being late too often, on the orders of his district manager. Her friend Dottie (Linda High) owns the apartment building she lives in and says she’ll do what she can, but her son and his wife are having difficulties and might need the apartment if she can’t make the rent. Jean (Sheri S. Herren) mentions that she has run into Mike (Mike Kozemchak), an old high school boyfriend, who is now a wealthy reproductive endocrinologist. Both women try to convince her to go see him and tell him that her daughter is Mike’s in the hope that he’ll cough up some belated child support. Margaret rejects that subterfuge — for now.

She does go see him — but to ask for a job or for job leads among his contacts. In one of the most awkward reunions ever, he ends up reluctantly inviting her to a birthday party that his much-younger wife is throwing for him. He assures her she can mingle and maybe someone might know of a job lead.

So off she goes to the party on Saturday. In the meantime, she had been disinvited by Mike who claimed his daughter had been taken ill and his wife wanted to cancel. That turns out to be not quite true. The party was canceled but it was Mike’s idea. Kate (Simone Brown), his wife, welcomes Margaret in for some wine and cheese anyway, and is delighted to have finally met an old friend of his.

It was during this act that the show really came to full, brutal life. It was sharp, incisive, and rife with all the ways humans find to rationalize their actions. At the climatic moment in the non-party when Mike and Margaret hurl some truth-bombs, the air just crackled from the their raw emotion. There was a palpable sense of violence in the air.

David Lindsay-Abaire, who wrote this award-winning play, has crafted a work that even if some of the references seem a bit dated, well, that just doesn’t matter. The underlying tensions — financial, emotional, and physical (Margaret has done physical work all her life and it’s wearing out her body, and those of her friends’ as well) — still exist in our society. Mike has rewritten his history into a rags-to-riches story where he achieved success without any help. Margaret knows her failings and tries to bat them away when other people bring them up, but she is self-aware enough that she understands how her past choices, systemic issues of poverty, and the lack of a social safety net have undermined her potential. One understands why Mike was so unnerved by her crashing back into his life, as well as how desperate her circumstances are. She holds up an unwelcome mirror to him of “what-ifs?”

The cast have a terrific chemistry. Herren (Jean) and High (Dottie), as the friends, squabble and pick at each other endlessly, and present a united front. Baker is a pitch-perfect Stevie. He’s attained the rank of “management,” but he is also aware of how tenuous his hold on the American Dream is. And he has a good heart. As Kate, Mike’s wife, Brown is privileged, but she’s not naïve and demands truth.

But it’s the scenes between Rhea and Kozemchak that push this play into the must-see category. They have wit and brutality in equal doses. Director Josh Sticklin has helped his cast find that sweet spot that holds an audience rapt, particularly in the second act.

Set design/master carpenter Matthew J. Keenan and properties/set dressing designer did a workmanlike job with the set. One jarring note was that the furniture for the second act — set in Mike and Kate’s home in an upscale community — doesn’t ring true. It’s shabby, but not in an expensive shabby-chic way. Costumer designer Shadia Hafiz has outfitted the Southies in the appropriate inexpensive, fast fashion that can be found at a big box store or Goodwill. But Mike’s tie is wrong — it’s not the right shade for a man aspiring to stay in the upper economic niche he now lives in. Kate is pretty much spot on — classy, perfectly understated, and beautifully pressed.

This is a show that starkly reminds us that for many the American Dream is a myth, no matter how hard they work. Through the lives of these people, it holds a mirror up to our brand of capitalism and asks us, how many of us are really one or two paychecks from disaster? It shows us how economic realities can fray the bonds of friendship, and yet moments of grace will slip through. It’s well worth seeing again in 2021.

Show Advisory: Adult themes and language and references to racism and sexism.