Theatre Review: ‘Laughter in the Shadow of the Trees’ presented by Edge of the Universe Players 2 (audio play) 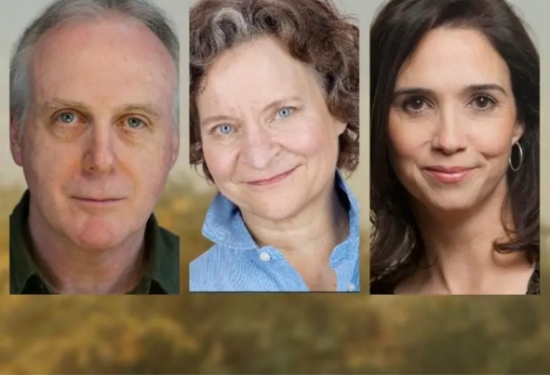 Dave Bryan Jackson, Sarah Marshall, and Holly Twyford in Laughter in the Shadow of the Trees.

I thought this play had one of the most lyrical titles I’ve ever heard, and I still think that. “Laughter in the Shadow of the Trees,” an audio play presented by Edge of the Universe Players 2, had moments of grace and beauty, but it didn’t quite live up to that lyrical image it promised.

It is a gentle, mannered, somewhat meditative work that is adeptly handled by three veteran actors who imbue it with added grace.

At just about 40 minutes, this audio play by James Prideaux offers a glimpse into an afternoon of one family coping with two very different losses — a father with dementia and a daughter whose marriage is imploding. This is at heart a contented family, at least from the conversation on which we get to eavesdrop. While that offers a certain amount of comfort, it doesn’t hold a lot of dramatic interest.

The way this family handles difficult times can be encapsulated in the following bit of dialogue. Holly Twyford, as the daughter Jan, has dropped by to visit with her mom, Felicia (Sarah Marshall), and her dad, Martin (David Bryan Jackson). Jan has a question about the limits of love, and rather gracelessly puts it to her mother when she confesses that her husband is leaving and has told her “he doesn’t love me anymore.”

Jan: “Isn’t it awful when somebody stops loving you?”

Felicia: “I suppose it must be.”

Felicia: “Well, how should I know?”

That latter remark from Felicia is the only line delivered by the mother at all sharply. Both mother and daughter back away from further discussion. The tinge of bitterness, anger, and disbelief that Jan allowed to momentarily color her tone in that barbed question disappears and Felicia modulates her own tart and slightly challenging tone and turns the topic to her concern with what the neighbors might think when Martin is outside. This allowed both women to step back and smooth away any confrontation. In the hands of Twyford and Marshall, it was a beautifully calibrated moment that stood out.

The play also makes the point that caring for others seems to be mostly women’s work. Felicia is her husband’s main caregiver (there’s a woman who comes once a week to do the heavy cleaning) even as he has started to become combative and forget her. There are two brothers briefly referenced, but they don’t appear in the play. It is the daughter, Jan, who comes and checks on mom and dad. Originally published in 1996, not much seems to have changed in the intervening 25 years.

For me, that exchange above was also at the heart of one of the themes of the play. Is the memory of love enough to carry us through when things start going dark? Does it ever really extinguish? For Felicia, the answer seems to be yes. Martin, the former brilliant critic and intellectual, is still the man she married deep down and that’s enough. For Jan, the answer isn’t as clear.

The play was directed by Stephen Jarrett with sound design and audio production by David Bryan Jackson. Casting was by Naomi Robin.

It is a gentle, mannered, somewhat meditative work that is adeptly handled by three veteran actors who imbue it with added grace.

“Laughter in the Shadow of the Trees,” an audio play produced by Edge of the Universe Players 2, runs through September 30, 2021. Once you buy the $5.00 ticket, it is available for 24 hours. For more information, please click here.