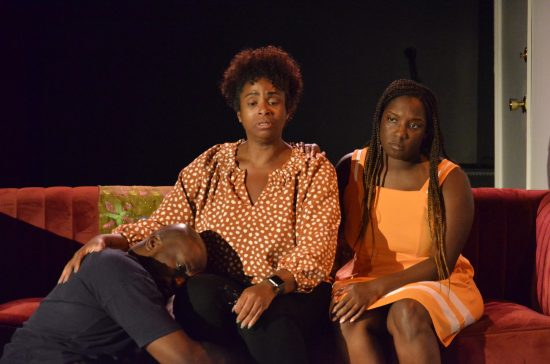 Martin Luther King, Jr. once said, “I refuse to accept the view mankind is so tragically bound to the starless midnight of racism and war that the bright daybreak of peace and brotherhood can never become a reality.” He said these words long after the publication and subsequent play of “Rachel” by Angelina Weld Grimké. Where King delivered an idealistic message, “Rachel” delivers sobering realities surrounding racism. Over a hundred years after its first production, “Rachel” has found new life in the modern era of America. It dares to bring the uncomfortable truth about racism in this country onto the stage for a new generation of audiences to contemplate.

The issues explored in this play are relevant and significant…

Though I found the nuances of this production by Rapid Lemon rather inviting, the overall story struggled to engage me. The language used was coarse at times, leaving little to the imagination in terms of bewilderment. This adaptation by Aladrian C. Wetzel thrusted its themes to fray the threads of American society itself, merging its air of antiquity with current trends. Idealistic words were drowned out by those of clear frustration. Ultimately, many troubling facts that rang true in Grimké’s day are still focal points for African Americans today. It’s a common subject on the news and practically every media outlet for good reasons.

I thought the actors portrayed the characters with great enthusiasm, especially Kwame Shaka Opare, whose presence dominated the stage. Dominic Gladden and Zipporah Brown had great stage chemistry which provided some radiating moments. Majenta Thomas played two roles, Sarah and Jimmy, a young lady and a young boy. This was quite the spectacle to behold. Valerie Lewis portrayed “Mrs. Loving,” the matriarch of the family and the stubborn optimist. Lewis was fantastic, as it was hard not to feel her pain as she retold some heart-wrenching stories about life (and death) in the deep south.

Director Tracie Marie Jiggetts has pieced together a well-structured play. The lighting designer was Hannah Brill, and the lighting was near perfect. There were voice actors and audio bits in this performance, which could have faded in and out without being so abrupt. Nonetheless, sound designer Shanika Freeman did put together some interesting audio sequences. I thought the set was aesthetically charming and the play was well-produced. Cheers, Max Garner.

The issues explored in this play are relevant and significant, so it begs for theatre to highlight them. It may be an acquired taste for some, but for those who enjoy a show that pushes the limits of their idealistic bubble, “Rachel” may just be what you’ve been waiting to see.