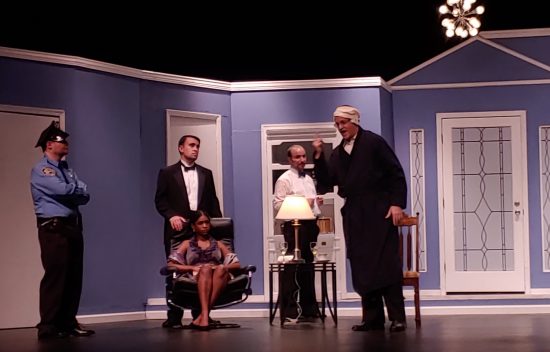 There is a jewel of a little theatre that can be found just outside of Washington, DC. Operated by the City of Rockville, it sits on lovely grounds where you can go for a walk or have a picnic. Located in the Civic Center Park, the F. Scott Fitzgerald Theatre hosts a variety of performing arts events throughout the year. It is the home base to several local arts organizations, including the Victorian Lyric Opera Company, Rockville Musical Theatre and, starting its 74 season, the Rockville Little Theatre.

…full of silly fun and a nice escape…

As live theatre is finally opening up, what we need is some fun and a good laugh. Rockville Little Theatre is currently presenting Neil Simon’s “Rumors,” ably directed by Laura W. Andruski. Written in the late 80s, it may not be Simon’s best or well-known (and a bit dated) play but it is still full of silly fun and a nice escape from all the challenges of the past year and a half.

The play opens with what appears to be a near tragedy but even until the surprise ending, we are not even sure what really happened. All we know is that a four sets of couples arrive at the home of their friends, Charlie and Myra Brock, to celebrate their 10th wedding anniversary only to find Charlie with a bleeding ear lobe from an apparently self-inflicted gunshot wound. Myra is gone, along with the cook and the rest of the help for the party. (We never actually get to see the couple.) The first to arrive is Ken (Joseph Coracle), Charlie’s lawyer, and his wife, Chris (Melissa Blum), who have already secured Charlie (asleep after taking some Valium) in his bedroom upstairs and tended to his wound. Because Charlie is the deputy mayor of New York, Joe feels he must make up a story to protect his friend as each couple arrives to the party. These are all successful, well-to-do Jewish New Yorkers who attend fundraisers for many good causes and live the wealthy, material life that was the hallmark of the 80s. There were no cell phones but you could get your personal doctor out of a performance of the “it” show of the day, “The Phantom of the Opera,” and have him return your call.

Lenny (newcomer David Gannon), Charlie’s accountant, and Claire (Sara Joy Lebowitz), arrive after having a mishap with a hit-and-run driver on the way to the party. Lenny’s brand new BMW has been damaged and he has whiplash. They are followed by Ernie, an analyst (psychiatrist), and his wife, Cookie (Tracie Danforth Witte). Cookie has, yes, has a cooking show and suffers from back spasms. She gamely ends up making dinner for the group despite a variety of mishaps. The final couple is Glenn (Johnathan Kilgore), who is running for state senate, and his wife, Cassie (Michaela Cheatham), who consults her crystal when she is stressed. They come in fighting with each other and don’t let up throughout the evening.

The humor is derived from every changing tales the couples create to protect Charlie, gossip, and suppositions about what actually happened. When the police arrive, lead by Lou Zammichieli as Officer Ben Welch and his partner, Officer Connie  Pudney (Niranjali Amerasinghe), the story really goes off the comedy rails. For a brand new actor to the stage, Gannon, posing as Charlie, is (and was) applauded for his lengthy monologue, delivering a wild concoction of a story.

While the pace was a little uneven at times, the cast put their all into it. Lebowitz was a real standout with perfect  comic timing and a dry wit, and Coracle has a lot of fun when his character suffers from temporary deafness. Bill Brown’s set and Avery Morstan’s costumes capture the 80s sensibility. These hard-working actors and creatives, all volunteers, show us what love of theatre, especially community theatre, is all about. Welcome back!

“Rumors” runs through October 3, 2021, presented by the Rockville Little Theatre at the F. Scott Fitzgerald Theatre, 603 Edmonston Drive, Rockville, MD 20851. For more information and tickets, click here or call the Box Office, 2 pm – 6 pm, Tuesday – Saturday, at 240-314-8690. Masks must be worn at all times by all persons over the age of two years old at all City of Rockville facilities.