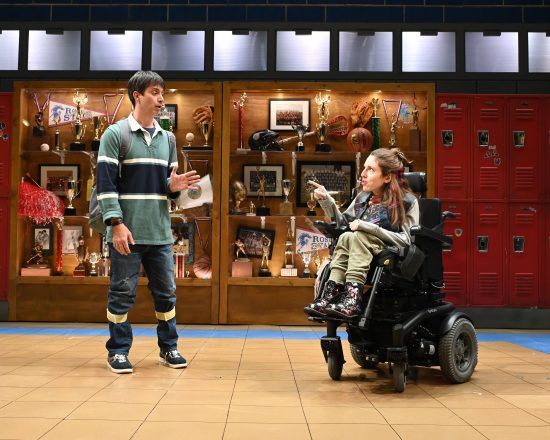 Classic novels and plays have often been reimagined and updated with modern language in high school settings — films like “Cruel Intentions,” “Clueless,” and “Easy A” come to mind. Works by Shakespeare have been similarly updated in “Ten Things I Hate About You” and “O,” among others.

While some of these adaptations delved into treachery and mendacity, they primarily dealt with social advancement. That’s certainly a theme in Mike Lew’s clever and witty, but occasionally uneven, play “Teenage Dick,” which successfully imports “Richard III” to an American high school. The source material is ever present, though Lew’s acerbic story owes a bit to the 1999 film, “Election,” as well.

…the cast is outstanding. The play is Woolly Mammoth’s return to in-person performance, and it is a fine one.

“Teenage Dick” was originally commissioned by the Apothetae, a theater company dedicated to productions “that explore and illuminate the ‘disabled experience.’” “Richard III” was a sensible choice. In recent years, “Dick the Bad” has more often been portrayed sympathetically—as a brilliant, would-be leader held back by the ableist bigotry of those around him.

So too is high school junior, Richard, who would be the obvious choice for next year’s class president, if only obnoxious jock, Eddie, was not in the way. Richard is widely disliked by his classmates for both his smugness and his weird tendency to lapse into Elizabethan speech—but also because his cerebral palsy makes them uncomfortable.

Gregg Mozgala, the artistic director of the Apothetae and the originator of the role at New York’s Public Theater three years ago, struts the Woolly Mammoth stage with suitable swagger, first emerging with a deceptive meekness and a dorky wave to the audience before launching into his scheming.

His sometimes-reluctant accomplice is Barbara “Buck” Buckingham, a classmate in a wheelchair who has few of her friend’s resentments, or at least has adopted a stoic attitude toward her high school life. Shannon DeVido, who also appeared in the original New York production, steals all her scenes with a breezy comedic confidence that contrasts nicely with Richard’s brooding. It’s a shame Buck vanishes for most of the second half of the play.

Part of what makes the play a bit uneven is that the tone by necessity shifts rather radically. Shakespeare’s Richard was a bitter adult waging war. Lew’s Richard is an angry teenager, who wants to get back at the cool kids. But he is also a bright and compassionate young man who cares for those in his life.

This is most clear in his relationship with Anne Margaret, a popular and beautiful girl whose “It Couple” relationship with Eddie has just ended under mysterious circumstances. Richard figures a date with Anne will rocket him up the social scale in “Can’t Buy Me Love” (not based on Shakespeare) fashion.

Richard sets out to use Anne, and she him, but they develop a real understanding. It turns out Anne also hates high school and just wants to finish up and head to New York to pursue a career in dance. Portrayed by exceptional dancer Zurin Villanueva, Anne has some exquisite scenes—choreographed by Jennifer Weber—dancing both alone and with Richard. There is an intimacy in their scenes that rises above the “high school” drama of the rest of the play.

This makes for a richer play and for a deeper understanding of Richard’s experience, but it also makes it harder to accept the choices he makes in the play’s last half-hour. He does things the Richard of the very first scene might have done, but by this point, he has changed—or at least Lew leads us to believe he has. Both Anne and Buck remind him several times that it is just a high school election. Would he really deeply harm those for whom he has shown real love just to win it?

Though these scenes veer away from verisimilitude, the production as a whole is still well worth it. The more direct references to the original text are always funny, and the cast is outstanding. Moritz von Stuelpnagel, who directed the New York debut as well, keeps an assured hand on the proceedings, which take place against a cleverly functional set designed by Wilson Chin, where a high school corridor folds out into a teenager’s bedroom and a ballet studio.

The play is Woolly Mammoth’s return to in-person performance, and it is a fine one.

Running Time: Approximately one hour and 40 minutes with no intermission.

Teenage Dick runs through October 17, 2021, at Woolly Mammoth Theatre Company, 641 D Street NW in Washington, DC. Click here for tickets and information. NOTE: All patrons must wear masks and show proof of vaccination in order to attend a performance.