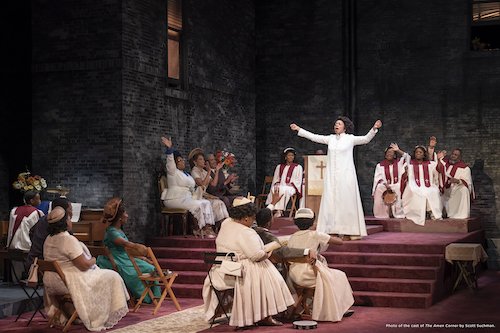 Photo of the cast of “The Amen Corner” by Scott Suchman.

Who is to blame when a baby dies?

Weathered old brick and burgundy carpets replace stained glass in Margaret Alexander’s church, where she warns a young mother, “Don’t let the lord have to take another child for you to do his bidding.” Her small flock gathers in the Harlem church faithfully to hear and mind her lyrical but stern preaching, raising their glorious voices in song. James Baldwin’s “The Amen Corner,” splendidly directed by Whitney White at the Shakespeare Theatre Company, offers a searing critique of religious orthodoxy and unforgiving moral expectations.

“The Amen Corner” proves that excellent direction and design, entrusted to an accomplished cast and creative team, can keep a decades-old play evocative and relevant.

Pastor Margaret (Mia Ellis) seems graced by God, carrying herself with such certainty you’d think the Holy Spirit whispered straight into her ear. From the pulpit, she denounces sins including reading the funny pages — her standards are high and exacting. In her house, “the Lord comes first,” even when that means leaving her family in crisis to visit a church chapter in Philadelphia. Unsurprisingly, her 18-year-old son, David (Antonio Michael Woodward), grates under her rigidity. Yet Margaret seems to have overlooked John 8:7, “He that is without sin among you, let him first cast a stone.” When Margaret’s husband, Luke (Chiké Johnson), returns, Margaret must reckon with her past mistakes.

Music (sound design from Broken Chord) weaves flawlessly into the play, through the choir’s hymns, by turns joyful or anguished. When the tambourines shake out a beat, the audience sways along, but when a booming singer stares down at Margaret from the balcony, it rings out like judgement and condemnation. A static set, designed by Daniel Soule, evokes a claustrophobic urban setting, with the church pulpit center stage and brick building facades surrounding it, so no action in the play is truly private from the eyes of neighbors or God.

Despite its publication in 1954, much of “The Amen Corner” remains relevant today. In a rebuff of prosperity gospel, Baldwin unveils the cruelty of treating individual tragedies as divine retribution rather than the results of living while poor and black. In a modern light, “The Amen Corner” also becomes a critique of virtue signaling and cancel culture, seen in the bouts of self-righteous posturing and subtle insults traded among Margaret and her congregation. Morality that leaves no space for errors or forgiveness bites just the same today.

“The Amen Corner” proves that excellent direction and design, entrusted to an accomplished cast and creative team, can keep a decades-old play evocative and relevant. Since the 2020 run was interrupted by the pandemic, this production plays a limited engagement at the Shakespeare Theatre Company. See it while you can!

Run Time: 2 hours and 40 minutes with one 15-minute intermission.