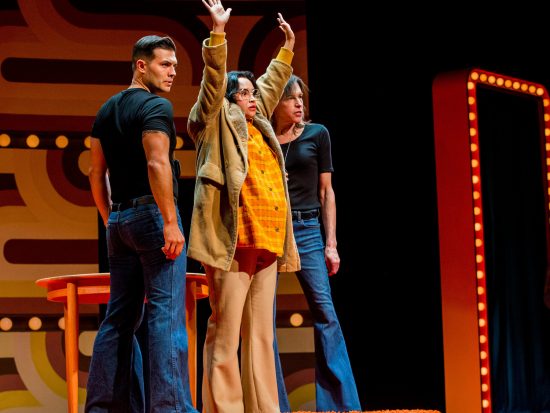 Noah Diaz has written an original play for Baltimore Center Stage, and it’s a shifty play (it’s loosely inspired on his mother and grandfather). The people are certainly shifty; the plot shifts; and even the ending is a tad, well, shifty. It starts out like a kind of demented “Our Town” (a small town in a small state in the middle of the U.S.A), and then turns into a redemption play. Sort of. The redemption does hinge on ill-gotten gains, but none of the characters seem too upset with that.

This is a very accomplished ensemble that work together seamlessly.

Marie is working at the same job she’s had since she was 16—at a laundry. Her best friend works there as well. Marie is also pregnant and living with a boyfriend she sort of hates. Her backstory contains a missing father who has made a career out of grifting. While Marie doesn’t pull cons or swindles, she has a flexible feel for other people’s property.

In the first few minutes as she walks to work, we meet some of the neighbors who suddenly appear in their doorways, hang out a window, or pop up in the street—all with something to tell Marie. Listening is not her strong suit.

But she’s due to get jolted out of her aimless existence. Two FBI agents appear and tell her her father is in town. In the meantime, her boss has blasted through like a tornado because he’s lost everything in a swindle. She puts the pieces together, finds her father, and they end up on a road trip so he can give her money.

In one sense, he does set her free to start a new life. There actually is some money, but she loses her father again. Only this time it’s her choice, and she returns to her small town in a small state to put down roots. At the very end, we learn a bit of how she does that and if she’s successful. So Diaz does give us some closure.

What he really didn’t do is give us characters to care about. The play is zany, rapid, and has some funny, physical moments, but the characters are rather one-dimensional and annoying—it’s hard to care what happens to them. Even when character growth does occur, it seems rather abrupt. There wasn’t quite enough sense of time passing to believe some of the changes that occur in the characters’ attitudes.

The actors go all in with this material. As Marie, Carmen Zilles finds the hurt child underneath the bland exterior, the steel to face reality and lower her expectations of her errant parent, and the grace to forgive him. Rachel Crowl plays a number of roles—some of the crazy neighbors (including Madam Miriam, the local psychic; the best friend, a waitress who starts falling for the father; and the female FBI agent)—and proves herself a master at shifting gears with just a change in how she stands and gestures.

Derek Garza also plays a number of characters (the witless boyfriend, the male FBI agent, and a neighbor or two) and does a fine job of switching characters. George, the father, is played by Christopher Ryan Grant. He is cruel, self-centered, somewhat fatalistic, and in love with the con. Watching him turn the charm on and off as needed is a master class in subtlety. He even looks more boyish when he does (maybe it’s the head tilt).

John Hudson Odom plays Context. He’s the Greek chorus of the play, letting the audience in on the characters’ inner thoughts, motivations, self-talk, and giving hints as to the action.

This is a very accomplished ensemble that work together seamlessly. A lot of that credit goes to Odom who is the glue that holds it all together.

Will Davis directed this premiere, and has created a stage set that, with a few deft changes of props, manages to inhabit a number of different locales. The cast moves much of the scenery when needed, and there’s a dancer’s fluidity to Odom’s movements that is wonderful to watch.

Special kudos to the scenic designer, Arnulfo Maldonado, who I assume crafted the beat-up mini Winnebago that is a key piece in the second act. It’s priceless.

Running Time: Approximately one hour and 40 minutes with one 15 minute intermission.