Audio Review: ‘A Midnight Dreary: Etched in the Wall’ by We Happy Few 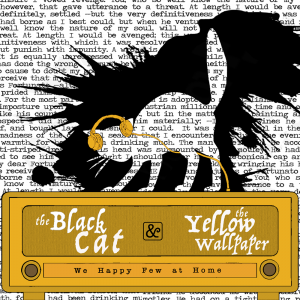 Either the Darkness alters—

Or something in the sight

Adjusts itself to Midnight . . .

These and other lines from Emily Dickinson’s poem, “We Grow Accustomed to the Dark,” introduce a “Etched in the Wall,” the latest offering for home listening on “A Midnight Dreary” by We Happy Few, a local Capitol Hill-based theatrical company which has taken to producing unusual audio plays during the pandemic. Directed by Des’ree Brown, this is the latest of the series based on works by Edgar Allan Poe. In fact, the series title “A Midnight Dreary” is borrowed from Poe’s famous poem “The Raven.”

This third installment of “A Midnight Dreary” showcases and goes beyond the Poe oeuvre — “expanding into non-Poe territory,” as artistic and marketing director Kerry McGee terms it. This is borne out by the Emily Dickinson poem quoted above, read with feeling and Poe-appropriate atmosphere by Paige O’Malley. Reading “We Grow Accustomed to the Dark” in a “Midnight Dreary” context brings an unusual gothic association to Emily Dickinson which, as it turns out, is not out of place, for it forms an effective introduction to Poe’s “The Black Cat.”  Poe’s classic horror story and the rest of this third appearance of “A Midnight Dreary” arrive just in time for Halloween!

In this celebrated Poe tale, an initially happily married young man who is an animal lover becomes hostile, violent, and paranoid due to his alcoholism. This unfortunate change of character leads to horrifying consequences, including a fire which destroys the couple’s home after their cat, Pluto (a name associated with the God of the Underworld in classical mythology), has become the narrator’s nemesis.

The intense performance of Isaiah Harvey as the narrator is excellent, as is the strategy of having his wife (played with equal verve by Gabby Wolfe) read many of the lines involving her. The greatest gift We Happy Few gives its audience in its “Black Cat” dramatization is its stunning use of sound effects by Robert Pike, especially the realistic sounds of the couples’ animals including a dog, a monkey, and, of course, the black cat. The gory scenes of the tale are also rendered more graphic through the skilled use of sound design. Finally, the sound effects help with comprehension of the nineteenth-century language of the script, loyal as it is to the verbiage of Poe. Little wonder that We Happy Few recommends listening via “a sounding system with high-quality, stereo sound.”

“The Black Cat” is paired with Charlotte Perkins Gilman’s “The Yellow Wallpaper,” an 1892 tale similar in terms of the central relationships, the theme of madness, and the presence of walls. Tẹmídayọ Amay forcefully portrays a writer named Jane, who has just given birth and is diagnosed with a case of nerves by her physician husband, John.  He gives her a dubious “rest cure” and dissuades her from writing—a suppression of her imaginative talents which causes her to see a woman creeping behind a hideous yellow wallpaper in a room in which she is, in effect, being held a prisoner. Or is the creeping woman actually there? Or is she perhaps a manifestation of Jane herself and indeed other suppressed women of the time? The Victorian classic swings back and forth between issues of feminism, post-partum depression, and horror. From its very opening as Jane speaks of “a colonial mansion, a hereditary estate, I would say a haunted house,” the tale fits in seamlessly with the spooky “Midnight Dreary” genre. Isaiah Harvey, the narrator and star of “The Black Cat,” also plays the husband to great effect in the “Yellow Wallpaper” segment, providing a further connection with the first tale.

This third installment of “A Midnight Dreary” concludes with a reading of Edgar Allan Poe’s poem “A Dream within a Dream.” Like the Dickinson poem which begins the episode, “A Dream within a Dream” is not usually considered a horror work, but with the reading of Paige O’Malley, backed by a wind-swept landscape suggested by the evocative sound effects, the poem fits in perfectly to the midnight atmosphere of “A Midnight Dreary.”

We finally note with appreciation a special feature of the We Happy Few at-home productions—a package with trinkets can be ordered by mail, providing listeners with a more tactile experience. In the case of “The Black Cat,” there are two tarot cards (one depicting a cat and one featuring twins), a matchbook from the pub which the dipsomaniacal narrator presumably frequents, and even the cat Pluto’s name tag. As for “The Yellow Wallpaper,” something purporting to be a “nerve tonic” accompanies a torn-off portion of the yellow wallpaper itself, with its “sprawling flamboyant patterns committing every artistic sin,” as Jane describes it. A flambeau candle is included in the mailing in order to create an atmospheric at-home gothic setting for both tales.

“A Midnight Dreary: Etched in the Wall,” presented by DC’s We Happy Few, should ideally be ordered in time to arrive for Halloween here.