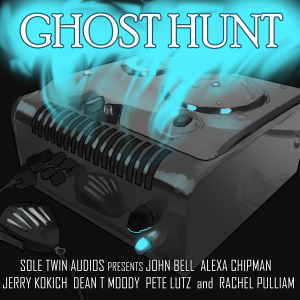 For several years now, Rachel Pulliam has produced and directed audio productions for various podcast companies. We have enjoyed her fabulous productions of classic books and dramas of the mind, especially her outstanding gothic recreation last year of a vintage radio script adapting Emily Brontë’s novel, “Wuthering Heights,” as an audio drama. She has now launched her own audio company, Sole Twin Audios, just in time to offer listeners a Halloween “Ghost Hunt!”

“Ghost Hunt” was a story by the English writer Herbert Russell Wakefield published in “Weird Tales,” the legendary horror magazine associated with the early stories of H.P. Lovecraft. The Sole Twin Audios creation, however, is based on a 1940s script from the radio anthology series, “Suspense,” and follows that model in relocating the haunted house from Wakefield’s London setting to a “house perched on a cliff [with] a sheer drop of about a hundred feet right into the old Pacific” near Malibu, California.

While the story and the audio script both date from the late 1940s, more recent fare comes to mind. The trope of a skeptical ghost hunter spending the night in a haunted locale might remind listeners of the Stephen King-based film “1408,” and the “recovered footage” narration device recalls “The Blair Witch Project.”  While striving for and achieving a faithfulness to the original audio production of “Ghost Hunt,” the producer/director tells MD Theatre Guide, “I wanted it to appear you are actually listening to the ‘found footage,’ and I don’t believe the original episode does that nearly as much.”

Although published originally for the printed page in “Weird Tales,” the story seems made for a radio drama. Smiley Smith is a 1940s “shock jock” of sorts. In between spinning jazz records of Louis Armstrong, he does “stunts,” often in questionable taste. His latest is to make a “wire recording” (a precursor to reel-to-reel and cassette recordings) as he “spend[s] the night in a haunted house on a spook hunt,” in a “death trap” in which “four people are known to have committed suicide… ” They do so running “toward the edge of the cliff [while] shouting and laughing and yelling” and then plunging in the sea below in the manner of the Gadarene swine possessed by the demonic Legion in the New Testament. Will Smiley or Dr. Reed, the psychic investigator who accompanies him, join their number? Will the two characters experience a role reversal, whereby the skeptic Smith becomes  a believer in the paranormal and the professional ghost hunter Reed becomes more of a skeptic? Listeners will enjoy this very cultured script, referencing, for example, the interest in spiritualism of Sherlock Holmes creator, Sir Arthur Conan Doyle, and electromagnetic radiation pioneer, Sir Oliver Joseph Lodge.

“Ghost Hunt” is hauntingly good and succeeds on a number of levels, not the least of which is faithfulness to the original wording of the Walter Newman script while rendering it convincingly alive for a contemporary audience. More sound effects are used than in the original (thus expanding the length of the play). Bernard Herrmann’s theme to the original “Suspense” series is reimagined at the end of the production by David Krause in a stylized fashion which also reminds one of the music in Alfred Hitchcock’s film, “Vertigo.”

The greatest claim to success, however, is the tour de force enactment of Smiley Smith by John Bell, moving as he does from cheeky disc jockey banter to the whimpering of an insecure, terrified man. It is an uncanny imitation of the original performance by Ralph Edwards, the long-time original game show host for “Truth or Consequences” who was cast in an unexpected dramatic role. Jerry Kokich as Dr. Reed, psychic investigator, also channels the spirit of the original actor, Joseph Kearns, most effectively. Director Pulliam appears in Hitchcock-like cameos in her audio productions, this time as a nurse. Alexa Chipman combines polish and creepiness as she serves a turn as announcer in the proceedings.

Sole Twin Audios has produced another spooky outing for this Halloween season, namely Shirley Jackson’s celebrated short story, “The Lottery,” which can also be found at the link below. The audio theatre troupe promises more holiday-themed listening fun ahead in December with “Holiday Affair,” based on the Christmas film which starred Robert Mitchum and Janet Leigh.

“Ghost Hunt,” which runs 32 minutes, can be heard at here.