Dance Review: Ballet Theatre of Maryland’s ‘Giselle’ at the Maryland Hall gives us the “Wilis” for a Halloween Treat 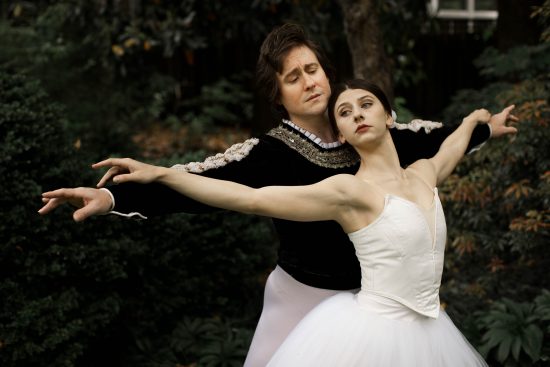 For nearly two centuries, “Giselle” has been called “the ultimate romantic ballet,” and remains today the supreme achievement of The Romantic Era with its fusion of dance and drama. Ballet Theatre of Maryland (BTM) captures the authentic feeling of young love, festive dancing, and haunting beauty in its debut of “Giselle,” restaged by Nicole Kelsch after Jean Coralli, Jules Perrot, and Russian master Marius Petipa, at the Maryland Hall through the weekend.

Lauren Martinez…A classical dancer with a beautiful line and gorgeous feet, she brought a special sweetness to the role.

“Giselle” has also been dubbed “Hamlet of Dance,” for its enduring qualities, of course, and because it provides the lead ballerina (Giselle) with a double challenge to dance and to act. That challenge was given to petite ballerina, Lauren Martinez, at the BTM’s opening night performance of the ballet…and she nailed it. A classical dancer with a beautiful line and gorgeous feet, she brought a special sweetness to the role.

The ballet relates the story of a simple peasant girl who goes mad and dies for the love of an aristocrat who deceives her. In the after-life, she becomes a Wili, her face covered by a bridal veil, who joins her ghost sisters as they force the men who deceived them to dance until they die.

In the first act, Martinez first enters as a young, spirited Giselle and skims the floor like a child running on the playground. In the opening show, she wasn’t content to merely dance Giselle; she became Giselle and her tenderness of acting matched her dancing.

Ryan Massey Count Albrecht) demonstrates that same joyousness, joining the peasants, a feisty  Roman Mykyta (Wilfred) among them. There was chemistry between the two young lovers, especially as Giselle pulls of daisies to determine if he loves her or not. Tall and confident, Collen convinces the audience and Giselle to believe he loves only her, and you could feel it in their dancing.

Meanwhile her friends rally round them in folksy character dances—Emily Carey and Isaac Martinez pull off some fine technique in the Peasant Pas de Deux. As the villain Hilarion, Mark McCormack’s drama skills are superb as he sulks for his beloved Giselle who only has eyes for her prince. All is happy and festive in the Rhineland village until the Royal Family arrives.

The passion and jealously abounds with a fight between the men. Albrecht’s confesses his infidelity—he is engaged to Princess Bathilde, regally performed by Madeline Jones, all decked out in silk and jewels.

A tip of the hat (or should we say crown in this ballet?) to Karissa Kralik, Karen Kralik, and Caroline Anderson for the festive costumes, and thanks to Aaron Bauer and Manassas Ballet Theatre for sets. Stacie Johnson-Leske kept the lighting right on target, especially in the graveyard scene where spookiness prevails.

At the end of the first act, broken-hearted, bereft of her senses, the heroine performs the grief-stricken “mad dance,” which has become the litmus test of prima ballerinas. In this slow-moving solo, Martinez tremulously stumbled through steps she and Albrecht had danced together, and after a last frightened run, dies in her mother’s (Catherine Welch’s) arms.

BTM offers a sublime second act, with the all-female corps de ballet attacking the stage like soldiers in a war. Lindsey Bell plays Myrtha, all-powerful queen of the Wilis, whose cold, imperious solo awakens the ghost-maidens and commands their would-be-husbands (who return each evening to place flowers on their graves) to dance to death. Bell mesmerizes in her ghostly floats across the stage, and makes the spirit queen into the third lead role, rather than a supporting part.

In many ways, “Giselle” could be called the first feminist ballet with Myrtha best described as a strong woman who won’t back down in punishing the men who have caused heartache. When she lifts the branch of Rosemary (a symbol for remembrance), she is firm in her stance. Men who have forsaken their brides-to-be must die. Giselle, meanwhile, stands for her man to the end and keeps him alive by dancing in his place.