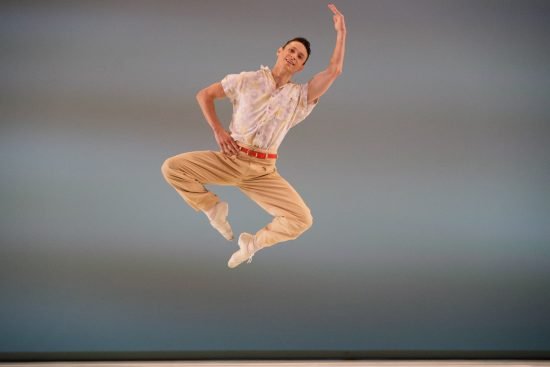 John Harnage in “Company B.” Photo by Steven Pisano.

You couldn’t miss the thrill of live dance Thursday night in the Eisenhower Theater where the Paul Taylor Dance Company kicked off the Kennedy Center Performing Art Series with a three-day engagement, too short for Washington fans.

For this writer, it was more than just a love fest, as the program brought back a flood of memories covering the late Paul Taylor who brought such joy to so many. For decades he presented his company in the DC area (where he had roots) and received accolades, awards, and honors in return.

One of my first reviews covered a benefit for the company, hosted by celebrity couple Paul Newman and Joanne Woodward. “Dancing for Dear Life” not only saved the Taylor’s troupe, it kicked off the golden era of contemporary dance with gala celebrations and extended ballet and modern dance programs, especially at the Kennedy Center.

No dance troupe generates more excitement than Taylor’s troupe. Anyone who catches these shows will have no troupe understanding why.

Fast forward 46 years with two of Taylor’s signature works, “Esplanade,” first danced in 1975, and “Company B,” celebrating its 30th anniversary this year with songs by the Andrews Sisters that express sentiments of folks during World War II.

The curtain rose on “Company B,” commissioned by the Kennedy Center and the first on the double bill program. A tease at first as individual dancers casually saunter onto the stage. Quicker than you can say “Bei Mir Bist du Schon,” the 13 dancers, dressed in eye-catching Santo Loquasto costumes, take off, first falling to the floor, then jumping up again and again.

Set to nine vintage Andrews Sisters recordings, this crowd-pleaser was seen in a new light last night. The dancers are younger, more daring (hard to imagine in a Paul Taylor work) and keener when it comes to feeling the music.

Those old enough to hum along no doubt found much delight in watching the songs so lovingly rendered through dance. Others responded to the robotic twitching — a hip thrust and shoulder roll — and, of course, the snazzy jitterbug. It appeared that many in the audience managed to download dance information — there is no paper program.

John Harnage delighted us as the “Boogie Woogie Bugle Boy (of Company B),” which shows off Taylor’s penchant for cool moves along with athletic feats. Alex Clayton captured the frantic rhythm of “Tico-Tico,” and “Rum and Coca-Cola” had us bouncing along with Lisa Borres and her followers in Taylor’s vital vision of the 1940s. Still there were those haunting figures, silhouettes in the background. Was this a reminder of imminent war?

Taylor’s dancers often present two sides of an issue, especially when a dance tackles such serious themes as social injustice and war. For example, “Company B” depicts both the anguish of young soldiers heading off to battle in the shadow while the rest of the company shows a jubilant WWII-era home-front anticipating victory.

Paul Taylor has created fresh and invigorating works punctuated by wit. Although we lost him in 2018, his works remain a vibrant and commanding force in dance. While all choreographers are, in a sense, visual artists whose medium is people rather than paint, Taylor was an art student before he was a dancer. His dances often feel as if they are taken from the canvas and come alive in front of you.
Taylor’s excellent reputation as a choreographer has been noted by major ballet troupes, including ABT, the Miami Ballet, and the Joffrey, have performed his works. Ballet superstars Rudolf Nureyev and Mikhail Baryshnikov have also danced in Taylor-made ballets. Nonetheless, Taylor’s choreography is grounded in modern dance. So many of his moves are unique, like the forward-moving hop with arms reaching high above. 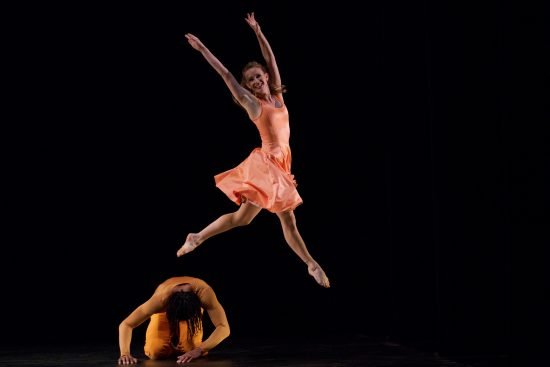 His masterpiece “Esplanade” is an explosion of wonder, set to “Violin Concerto in E Major, Double Concerto for Two Violins in D Minor (Largo & Allegro), The lighting by Jennifer Tipton brings to life the energy and power of the dance. Costumes by John Rawlings are perfect for the delicate movements as well as the buoyant jumps.

Every time I hear the intro to Bach’s violin concertos, my heart beats a little faster. And every time I watch the closing moment with the lone dancer reaching out to the audience, I am reminded how fortunate Paul Taylor’s technique has not diminished over the years.

No dance troupe generates more excitement than Taylor’s troupe. Anyone who catches these shows will have no troupe understanding why.

The Paul Taylor Dance Company presents two masterworks, “Company B” and “Esplanade” now through Oct. 9 at the John F. Kennedy Center for the Performing Arts, 2700 F St. NW, Washington, DC 20566. For information on this program and the 2021-22 Dance Series, visit  here.