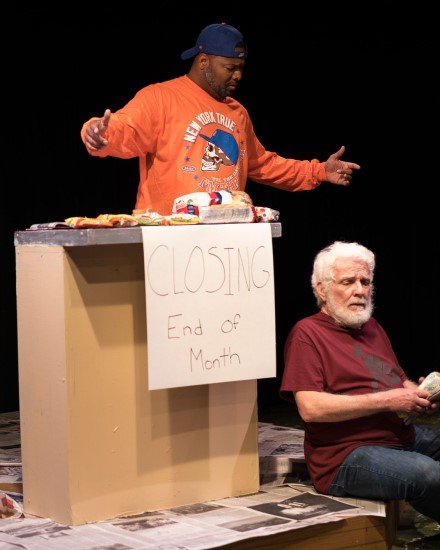 “A Black and White Cookie,” written by Gary Morgenstein and produced by Maura Suilebhan, recently had its world premiere at Silver Spring Stage. The play follows two men, Harold Wilson (Melvin D. Smith) and Albie Sands (Paul Brewster), over the course of several days. Wilson, a Viet Nam veteran, owns a newsstand in New York City that must close at the end of the month. The rent has been raised and finances are tough due to COVID. Sands is an old 1960s radical who never gave up the fight. He is a long-time patron of the newsstand which also sells sandwiches and other sundries. When Sands hears about the closing, he encourages Wilson to fight his landlord, J. N. Pham Real Estate.

‘A Black and White Cookie’ was a sweet treat with a New York flavor.

Meanwhile, Wilson has planned to move to Florida to live with his niece, Carol Wilson (Jacqueline Youm). Carol loves her uncle but is upset that he does not take care of his home or his health. She is a bit inpatient with him because he is not rushing to pack up to come live with her. When Carol finds out about Sands, she becomes very angry and plant seeds of doubt about Sands’ motives into her uncle’s mind. Eventually, the two men bond, but I don’t want to spoil too much of the plot if the show is produced again in the future.

The themes of the play are right out of the 60s —“Love One Another” and “United We Stand,” along with “you can’t judge a book by its cover” and that we all have to avoid stereotyping. Even its title, “A Black and White Cookie,” is symbolic of brotherhood. Black and whites, as they are called in New York City, are sold at most German/Jewish bakeries and now are even packaged at supermarkets all over the country. In the old days they were about six to eight inches in diameter.

The play has some important points to make. However, it was more like a long, one act play than a full length production in both time and in structure.

Smith did a fine job as Harold Wilson. He created a man who has struggled his whole life but can still be principled and have human kindness to others when needed. His demeanor and voice reflected Harold’s age, probably over 70, even though his appearance was that of a much younger man.

Brewster appeared to be about Sands’ age. He did well to create this old radical with some hidden secrets. Youm not only directed but portrayed Carol Wilson. It is challenging to do both and this play is one of her first as a director. Nevertheless, she did justice to the role and made the character believable.

The supporting cast included Helen Cheng Mao as the Vietnamese-American landlady, giving her a multi-dimensional character —pragmatic but with some compassion. Robert Howard did well as Mitchell Reed, a friend of Sands. Malane Silver was the unseen Narrator.

Youm’s directing was a nice try in these strange times. She did help to create likable characters—Brewster and Wilson had some nice chemistry.

“A Black and White Cookie” was a sweet treat with a New York flavor.

To see Susan Brall’s interview with Gary Morgenstein and Jacqueline Youm for MD Theatre Guide, go to this link.