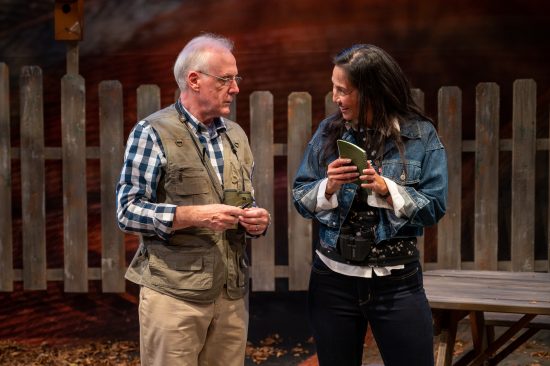 David Bryan Jackson as John and Regina Aquino as Caitlyn in “Birds of North America.” Photo by Chris Banks.

One of the funniest moments in the spare, beautifully crafted “Birds of North America” by Anna Ouyang Monech, comes when John (or Dad) dismisses a bird his daughter Regina spies at the beginning of their birding journey as an LBJ. That stands for “little brown job.” John doesn’t think much of the different starlings and sparrows and other non-flashy little brown or brownish-grey birds so he doesn’t really bother to count them in his life list. Later, Regina gets to drawl back at him that she likes the LBJs, as he winces. It’s a good metaphor for this father and daughter who love each other so much it hurts, but can’t connect. It’s also a good metaphor for how they approach life.

…Beautifully crafted… lyrical, funny, and painful play that should be on your must-see list.

But they keep trying. The story takes place over nine years—from when Caitlyn is about 25 to her mid-thirties, through a couple of her relationships, miscarriages, job changes, her mother’s illness and John moving into and coming out of retirement and other major life changes. When we first meet them, John is a scientist who, after over 20 years of hard work, is on the third stage of trials for a new drug that could cure a chronic disease. In the wider world, the climate crisis has intensified, society is splitting into more and more divisive groups, and every choice can seem fraught with unforeseen consequences. Change is bringing them together and splitting them apart, as the past 18 months have done to so many.

So John (a veteran birder) and Caitlyn (who is a novice) regularly meet at the Baltimore family home and spend time together in the back yard. They try, with varying degrees of success, to connect to each other. Both are flummoxed as to why it is so difficult to be seen and understood,even as they become more entrenched in their positions. The seasons pass, the birds come and go, and John and Caitlyn’s relationship ebbs and wanes.

This play also offers very welcome moments of laugh-out-loud humor, Though even the humor that isn’t so much laugh-out-loud and born of sorrow, fear, and longing, offers some hope that it can at least keep even a tiny door open. You feel it viscerally when John leaves a message on his daughter’s voice mail, speaking completely from the heart, then deletes it and leaves a simple, hi, hope all is well, call-me-when-you-can message. That lost opportunity that Caitlyn has so pined for is heartbreaking. It’s funny, in a familiar, have-I-revealed-too-much, face-palm kind of way.

As John, Jackson gives us a man who has been trying to live life as ethically as he can, but has turned a little strident in his views and is unyielding. He’s a scientist—rational above all—who values specificity and conscious, well-weighed choices. Like many men in the later third of his life, his life’s work defines him to a great extent, and he’s a little lost when it ends. He reminds us that we have greater responsibilities than our own concerns, and that change is inevitable and can be frightening at any age. Uncertainty is not the province of the young. Jackson has a dry, dead-pan delivery in much of his dialogue, yet you sense the fire underneath. The dialogue between him and Caitlyn when a fledgling falls out of a nest and they debate what to do is both illuminating and insanely funny. It also offers a roadmap on how to reach a mutual understanding for them and the rest of us. It also illuminates how hard it is to make those moments last when one is seeing trees and not the forest.

Aquino’s Caitlyn is young, smart, knows which of her father’s buttons to push, and finding her own path in life. She doesn’t need her father to agree with her every choice, but wants him to respect her right to choose. She also craves his protection. When she describes, in excruciating detail, her last miscarriage and the treatment she endured from a young, male doctor, she is desperately trying to make him understand her reality as a young woman in the world. The moment isn’t successful. Aquino wisely delves down to find the strength in, and genuineness of, her character’s path.

Serge Seiden directs “Birds of North America” with a lyrical touch, and uses the humor wisely. It’s never jarring or abrasive, but modulated as naturally as when two people come near a precipice and take that step away. He is ably assisted especially by lighting designer, Brittany Shemuga, whose work gracefully illuminates the passing seasons and the aging of the characters. Sound designer David Lamont Wilson gives us aural cues with the sound of wings whooshing by when father and/or daughter have caught sight of a bird and it takes flight—except for an owl. Because of their wing and feather structure, owls are silent. When one is spotted, the silence is somehow reverent. The set was designed by Alexa Ross, with an elegantly dreamy backdrop of color and wings anchored by a picnic table, benches, lawn chairs, and piles of leaves (Deborah Thomas is the properties designer). Throughout the show, at scene changes, more leaves are brought to the stage and seem to help signify the increasing weight of things said and unsaid, and time passing. It’s a thoughtful set.

Brandee Mathies is the costume designer and the clothing choices reflect the characters. John’s clothes barely change—khakis, a plaid or plain shirt, a jacket or vest—all in earth tones. This is the very wardrobe of a man for whom clothing is simply covering. Caitlyn’s clothes change as she ages from the mid-twenties to mid-thirties, becoming more tailored and slightly more authoritative.

“Birds of North America” is a lyrical, funny, and painful play that should be on your must-see list. It says so much, and the 90-minutes fly by. We may all walk away with more respect for the LBJs—the everyday little birds—who by their sheer numbers and anonymity, change their little corners of the world without fanfare.