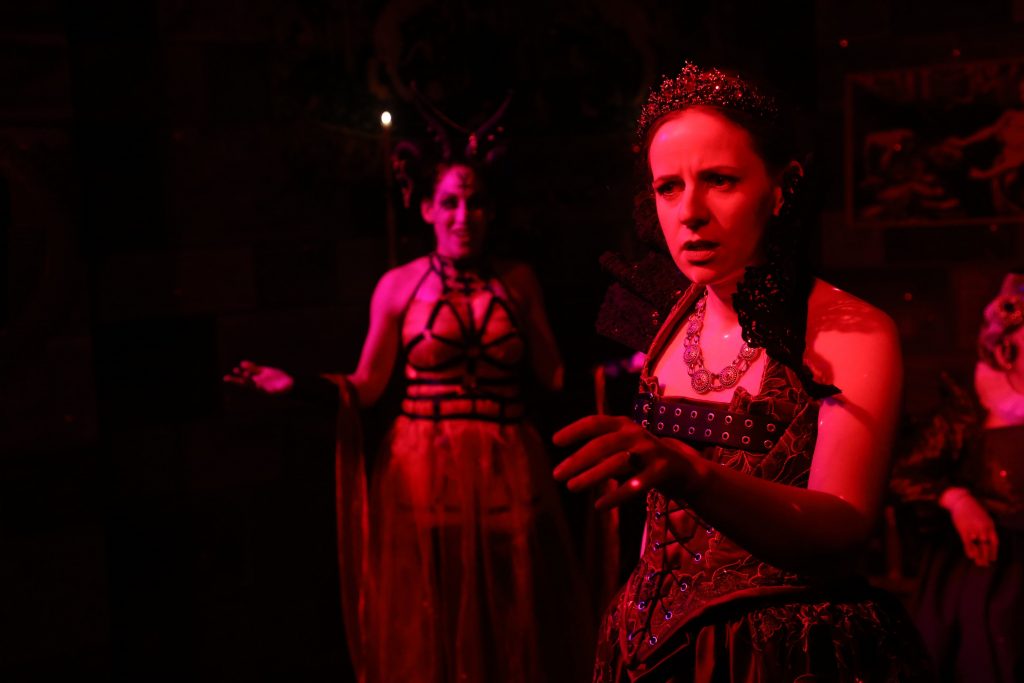 At the turn of 17th century, the Countess Elizabeth Báthory de Ecsed was a powerful figure in the Kingdom of Hungary. Related to the king of Poland, the grand duke of Lithuania, and the prince of Transylvania, Elizabeth enjoyed great privilege and influence. She reportedly also enjoyed imprisoning, torturing, and killing young women – possibly hundreds of them. Scores of witness accounts were collected during an investigation, including accusations of cannibalism, vampirism, and other unladylike practices. Might the countess have been the inspiration for Bram Stoker’s novel 300 years later? She certainly was for Kelleen Conway Blanchard’s 2014 stage play, “Blood Countess,” appearing this month at Strand Theater.

Blanchard’s highly stylized script is often funny, very sexy, and quite violent. At its opening, we meet Elizabeth (Katharine Vary) as a young girl, with her nurse, Dorkus (Kathryn Falcone). Dorkus scolds the girl for bringing a wounded bird into the house: “Do you want to die of earwigs? No, you don’t,” she snaps. Dorkus demands that the animal be put out of its misery, and Elizabeth does the deed herself, accompanied by a spine-tingling sound effect from designer Carlos Guillen. From that moment onward, the character and the play are set on their bloodthirsty course: “I feel differently, Dorkus. I made a little death.” Although the girl was fluent in several languages by this point, the double entendre of a reference to la petite mort is doubtable. One might not put it past the playwright, though, who scatters much more blatant ribaldry throughout the work. Blanchard provides a sword above the mantlepiece and doesn’t wait until the third act to employ it, crafting a bizarre mating ritual between Elizabeth and her intended, the Count Ferenc Nádasdy (Stephen Kime). A great many phallic jokes by the author aside, the choreography of both intimacy and violence by Mallory Shear are absolutely superb.

The love-at-first-parry tale becomes one of separation, as the count is called away to war against the Ottomans. He has no trouble keeping busy on the crusade, being “always unnaturally unfaithful,” and sends his teenaged bride a gift to keep her occupied. The gift is in the person of Fitzco (Liz Armour), an unscrupulous conjurer with a knack for troublemaking. Fitzco is engaging enough, providing songs and tricks for her mistress’ amusement, but everything changes when Ferenc is killed. His disemboweled spirit visits for a final kiss, telling lies of a heroic death. Fitzco summons the Horned Woman (Mallory Shear, again), and everything takes a nasty turn. The countess tells us “Love is gone. Now begins hate.”—just in time for intermission. Fearful that her beauty is passing while her wealth is drained by the war effort, Elizabeth discovers that the blood of young girls enables her to maintain a youthful glow herself. She and Fitzco start a ladies’ finishing school, where the pupils never see graduation. The victims (all played by Emilie Zelle Holmstock) are so, so pretty and so, so dumb. “Suffering gives me hives” says one of them (in a delightful Valley Girl accent), while another goes on and on about turnips right up to her final breath.

Eventually, as must happen, folks in town begin to notice suspicious things, like severed human feet, and the local clergyman, Father Anselm (Chaz Kedesla), is able to arouse the king’s interest in an investigation. It doesn’t help her case that the countess has run out of cash to lend to the war, while Anselm covets her land holdings for his church. An inspector (Kime again) is sent, Fitzco cuts a deal for leniency, and the countess spends the rest of her days under house arrest. Anselm asks for harsher punishment, to which the inspector replies “You fool. There is no justice. Only business.” Finally, the Horned Woman returns to collect Elizabeth’s soul, demanding that she “come down to my sticky red world.”

Katharine Vary, a familiar favorite of Baltimore stages, returns to Strand in the title role. Her character’s transformation from pre-teen to north of 50 is laudable for the fact that she doesn’t bother much with playing age, focusing instead on Elizabeth’s emotional and moral journey. She navigates all of this with gorgeous subtlety and texture, in situations where it might be tempting to head straight over the top instead. Vary is also excellent in handling considerable physical demands. Apart from the swordplay and intimacy mentioned earlier, Vary is called upon to simulate several epileptic seizures during the play. The work must be incredibly taxing, yet Vary doesn’t miss a beat. Stephen Kime, too, is marvelous in his performances. Appearing on a Baltimore stage for the first time since “Crusade” with Rapid Lemon in 2019, Kime is a natural counter to Vary. Their work together has a don’t-blink immediacy and intensity. Kathryn Falcone as Dorkus is fabulous. She fills the role with a sweet yet earnest sense of hope and duty, sustaining an endless barrage of ageist attacks from her mistress with a self-deprecating shrug. Dorkus is the moral center of the play by default, and Falcone stands that ground firmly while also managing the predictable demands of comic relief. Amy Heller plays Elizabeth’s mother, the Baroness Anna Báthory, early in the play. If Lewis Carroll’s Queen of Hearts were somehow dialed beyond 11, it still wouldn’t hold a candle to Heller’s portrayal of the baroness. The evil certainly doesn’t stop there, though. Armour, as Fitzco, is delightfully nasty and self-serving. Shear, as the Horned Woman, is so quietly creepy that Strand’s stage cannot contain her. At intermission on opening night, Shear, in costume and in character, prowled the house and lobby fidgeting with a dagger and daring patrons to make eye contact. Yikes.

Erin Riley, Associate Artistic Director of Strand Theater, has outdone herself at the helm of this fine production. With help from Assistant Director / Special Effects Lanoree Blake, Stage Manager Jennifer Hasselbusch, and Dramaturg Heather O’Shaugnessy, Riley has every gear turning together in a well-oiled machine that appears to do a million things effortlessly. Amy Rhodes’ set and Amy Rawe Weimer’s costumes are period-perfect while also playfully coloring outside the lines here and there (we love Father Anselm’s fishnet shirt). Lana Riggins’ lighting and Carlos Guillen’s sound are S-C-A-R-Y, and original music by Donna Korn adds a kind of old Boris Karloff movie feeling. And kudos to Props Master Jennifer Swisko Beck, who’s provided everything from daggers on the sideboards to pistols on the wall, and one or two bird skeletons for good measure.

If you want to see one scary play this Halloween season, make it this one. While the production lacks diversity in casting (normally a strength of this company), it delivers plenty of thrills and chills.

Running Time: Two hours and 32 minutes with one intermission.