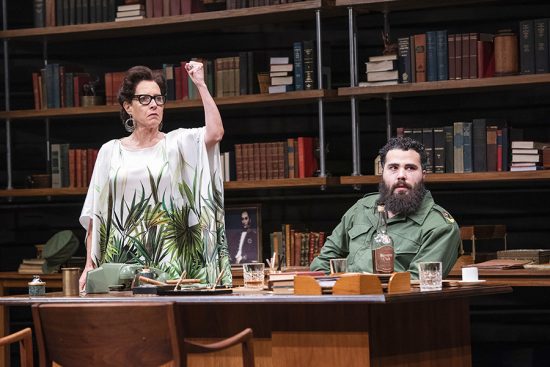 Cuba is on the cusp of crisis. Fidel Castro is struggling to make the right decisions when revolutionary Celia Sánchez returns, four months after her death. Directed by Molly Smith, the premise of “Celia and Fidel”—fusing historical drama and magical realism—intrigues and grips. Unfortunately, the play, commissioned and produced by Arena Stage, falls a little short of its promise, leaning more towards the mundane than magical with uncontroversial critiques of Castro’s Cuba.

Despite her first billing, Celia Sánchez (Marian Licha) is never given center-stage in “Celia and Fidel.” Instead, the show focuses on Fidel, portrayed as egotistical, paranoid, and slightly unhinged by a spellbinding Andhy Mendez. Meanwhile, Celia is part lover, mother, collaborator, and confidant to Fidel, who will “never stop needing” her. She debates Fidel, providing pushback against his hypocrisy and short-sightedness that his new assistant, Consuelo (Heather Velazquez), is too young, fanatic, and frightened to give. Yet Celia never solidifies into a complex and compelling character in her own right.

Created by set designer Riccardo Hernández, the 1980 Havana Peruvian Embassy Crisis provides a backdrop for the action of “Celia and Fidel,” where all events play out in Fidel’s massive office. It’s the kind of office a man might think projects power, with towering bookshelves and oversized Cuban flags, but actually makes him appear lonely and small, engulfed in the space. With Manolo Ruiz (Liam Torres), a Cuban exile and envoy of the Carter Administration, added to the mix, high-stakes and emotional debates and negotiations fill hours in the office as the embassy crisis unfolds. Although clearly well-researched by playwright Eduardo Machado, dramatic tension for the historically-rooted plot of “Celia and Fidel” is undercut by commonly-known facts. The embargo on Cuba is not lifted, Carter loses reelection, and the embassy crisis leads into the Mariel boat lift.

Unfortunately, the magical elements to the show are also underwhelming, leaving “Celia and Fidel” relatively bland. The lighting and sound design, by Nicole Pearce and Roc Lee respectively, were adequate but plain. Crossing the border of life and death surely could have used a bit more theatricality than a few bright lights and the rushing sound of a brewing storm. Costuming, by Alejo Vietti, proves more inspired, with Fidel in his iconic miltary fatigues and Celia Sánchez clad in white, evoking death in her silky, flowing blouse and life in its green-frond print.

“Celia and Fidel” creates a vivid portrait of Castro, but the social commentary seems uncontroversial for American audiences—totalitarianism demands absolute loyalty without conscience for the brutality and suffering it causes. Despite a few gripping scenes and the best-efforts of its small but mighty cast, “Celia and Fidel” fails to use an evocative premise to its full potential and struggles to deliver a compelling narrative arc. Overall, there’s enough action to keep the audience entertained but little to carry home with you at the end of the night.