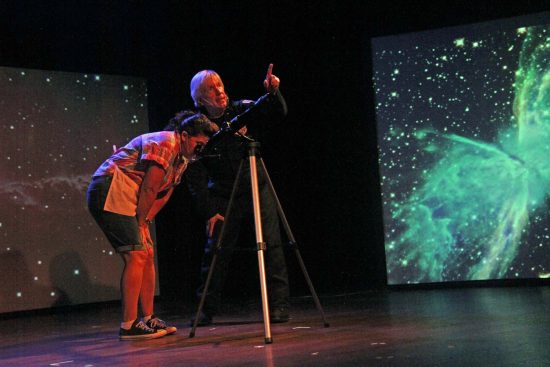 Aldersgate Church Community Theatre is opening its in-person 2021-2022 season with Jane Anderson’s “Defying Gravity,”  a look at the Challenger tragedy of 1986 with Monet as our guide. Alexander set out to write a play that was impressionistic in form and structure and she succeeded. For patrons who prefer more linear timelines (the play’s scenes are set in 1986 and then 20 years later), it is more of a stretch. This is a play to watch and listen to without preconceived ideas.

…the acting is very, very good, and this cast mines all the gems from the script.

We being the journey by listening to Claude Monet (Paul Donahoe) talk about Impressionism and how its proponents view life. Central to the entire play is his conviction that there would be nothing greater than to be able to defy gravity and gaze down at the earth as God would see it. He wants to paint the earth in every fleeting light, just as he did Rouen Cathedral. This actually works well as a linchpin to explain why many have yearned to see the earth from space, but it’s a little jarring when he shows up throughout the rest of the play, in modern times.

Through the interactions of the other characters—the Teacher (Heather Plank); her daughter, Elizabeth (Kathy Ohlhaber); C.B., a mechanic at the Kennedy Space Center (Bruce Alan Rauscher); Ed (Steve Rosenthal) and Betty (Patricia Spencer Smith), a retired couple who have sold their home and committed to traveling in an RV; and Donna (Christine Tankersley), the bartender/manager of a bar frequented by the NASA folks—we get to see the effects of the dream of defying gravity on those involved in the space missions and ordinary people. We also see the effects on people when things go horribly wrong.

The actors do a fine job with the script. Ohlhaber plays from a child of about six to a grown woman. She has the mannerisms of a child wanting her mother’s attention down pat. When she bangs her toy space shuttle on the floor after her mother gets a phone call, you can hear the chuckles in the audience. She also handles the adult Elizabeth—who forgives her mother for leaving her—with grace. Smith is pitch-perfect as Betty. You recognize this type of outgoing, garrulous older woman who will simply go up and talk to anybody immediately. She and Rosenthal play well together as husband and wife who are still navigating 24/7 togetherness as they trek back and forth across the country. The scene where they are driving away from the Dakotas brings this poignantly to life (Personally I think there’s a beautiful treasure of a play there about aging, different needs, and navigating such a personal seismic shift). Tankersley brings a real intelligence and fierceness to Donna. She works in a bar, but she has a huge heart and an ability to read and manage people. Rauscher as C.B. has one of the funniest monologues as he talks about his feelings after the crash. His description of the stultifying bureaucracy of working at a big agency is genuinely funny and horrifying. Plank as the Teacher (and Christa McAuliffe) brings real conflict to her role as a devoted mother who yet chooses to engage in a trip to outer space.

But the script is problematic. Without the intermission, it’s 90 minutes and we are introduced to seven characters in a complex, very fluid structure that only gives us glimpses beneath the surface. Except for Donahoe as Monet. He’s an artist-painter all the time, even when briefly interacting with some of the other characters.

The director, Jessie Roberts, and the actors have plumbed those brief portraits to find what complexity they can, and they do it without overplaying the more emotional moments. It’s really what makes the play.

The set, by Shah and Leah Choudhury, is defined by the three large, free-standing screens that encapsulate the action. The furniture and props are matter-of-factly moved in and out by the cast and it’s almost a dance in its precision. JK Lighting (Jeff Auerbach and Kimberly Crago) provide lighting that helps to delineate each set piece of action. Jon Roberts handles special effects (the projections) and sound and the projections were very nearly seamless. There had been a slight delay with opening the house due to some technical difficulties with the projections but it wasn’t evident during the show.

“Defying Gravity” seems to want to be a meditation on humans of all walks of life reaching for their pinnacle, but there’s not quite enough time to fully develop this theme. But the acting is very, very good, and this cast mines all the gems from the script.

Running Time: Approximately one hour and 40 minutes with a 10-minute intermission.