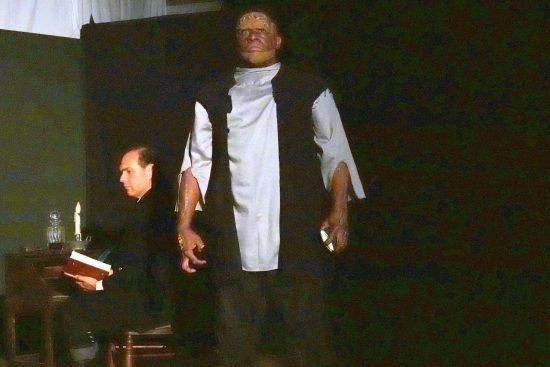 Justin McCright as Captain Walter (left) listens to the story of Frankenstein’s monster as played by Harvey G. Williams (right).

I can still recall reading Mary Shelley’s “Frankenstein” in school. Shelley’s writing style precisely reflected the period of gothic horror and romanticism when she wrote it in 1818. It has a sense of grandeur but also manages to maintain a personal connection to its reader. Though I have seen multiple versions for the screen, Twin Beach Players’ (TBP) current production gave me the first opportunity to see it produced live on stage.

Williams imbued The Creature with so much humanity and turmoil that I found myself viewing him as the protagonist and Victor as the villain…a worthy production.

Written over two centuries ago, “Frankenstein” tells the story of a young scientist named Victor Frankenstein (earnestly played by Cameron Walker) who sets out to reanimate a corpse in order to create life itself through the use of electricity. This endeavor does not go as planned and Victor finds himself having to deal with the consequences of his decision to open up his own proverbial Pandora’s Box. “Frankenstein” is a tale of heartbreak, murder, loneliness, and regret. Above all, it begs the timeless question: even if we have the ability to do something, should we? The playwright of this particular adaptation, Mark Scharf, wonderfully delivers on Shelley’s original intent.

The technical end of this production was impressive in its scope, especially given the normal limitations that sometimes come with community theatre. Sid Curl serves as both the director and set designer and does an excellent job of creating a compellingly thematic backdrop in which to tell Scharf’s concise and imaginative adaptation. Curl’s set design is at first simple with a desk on one end of the stage, three scrim-like materials center stage, and a few draped sheets on the other end of the stage. As the play progresses, the set moves fluidly to create a wide range of scenes. Everything from a peasant’s hovel, to a large ship, to graveyards, and beyond is beautifully conveyed with an effortless quality. To say more would spoil the artistry of the set design and be a disservice to prospective viewers. Curl’s attention to the smallest details illustrates just how much he was invested in this play.

Lighting design by Melissia Nikolaus further enhanced technical aspects of this production. Nikolaus’ design was incredibly thoughtful—also with a focus on the finest details. Examples include the shadows of sails being projected to represent a ship, blue ripples of light to expand the sense of being on water, and the overall level of light to tell the time of day—all elements that help to pull the audience further into the story. This was my first time reviewing TBP, and if this production’s skill in lighting design was any indicator of how their plays normally handle this creative element, I look forward to future shows.

Two actors of particular note were Angela Denny as Elizabeth and Harvey G. Williams as The Creature. Denny creates a truly authentic, three-dimensional person out of what could have easily been just a background character. She does this through seemingly innocuous moments throughout the play in the way that she touches Victor’s face for the briefest moment and her various reactions during scenes. Denny makes Elizabeth feel like a part of the story, and not just a prop in Victor’s narrative. Williams imbued The Creature with so much humanity and turmoil that I found myself viewing him as the protagonist and Victor as the villain. I had always felt this way about the original novel, but to pull off such a feat on stage requires an actor to possess a great deal of emotional control. Williams does just that and it is an utter joy to watch him. I found myself completely immersed in his passionately complex performance. I look forward to seeing him in any future production in which he is cast.

This past year has been full of uncertainty for everyone. Something as simple as celebrating the impending spooky vibes of Halloween through a live production of “Frankenstein” helps get into the fall spirit—and it was truly a treat. This production tells a timeless story that both entertains and evokes deeper examination—the true hallmarks of a worthy production.

Content Advisory: 12+ for frightening themes of murder and reanimation.