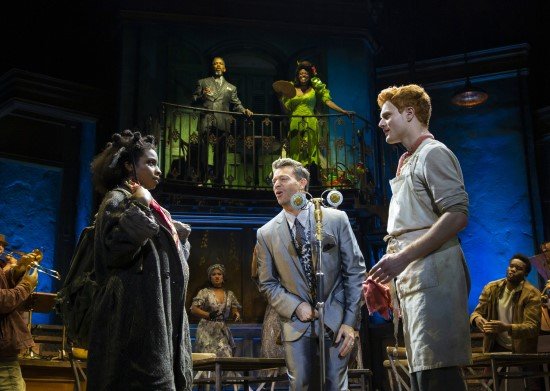 “Hadestown,” with music, lyrics, and book by Anaïs Mitchell and co-developed and directed by Rachel Chavkin (“Natasha, Pierre & The Great Comet of 1812”), officially begins its national tour at the Kennedy Center Opera House. “Hadestown” was originally produced in Barre, Vermont in 2006. In 2012, Mitchell met Chavkin and the two started adding additional songs and dialogue. The musical premiered Off-Broadway at the New York Theatre Workshop in 2016 and finally came to Broadway in March 2019. It received a record 14 Tony nominations and won eight, including Best Musical and Best Original Score. It also won the 2020 Grammy Award for Best Musical Theater Album.

‘Hadestown’ is devilishly delicious and will put a fire in your soul.

“Hadestown” is based on two Greek myths, Orpheus (Nicholas Barasch) and Eurydice (Morgan Siobhan Green) and Hades (Kevyn Morrow) and Persephone (Kimberly Marable). The plot stays fairly true to the former. Orpheus is a musician who falls in love with Eurydice. When she goes to the Underworld, Orpheus manages to follow her and tries to bring her back to the surface. The story varies a little, but the main points are there. The subplot of Hades and Persephone’s love story is edited down and Demeter, Persephone’s mother, is not in this tale. The musical takes dramatic license and intertwines the two stories.

“Hadestown” uses Hermes (Levi Kreis) as the narrator and Kreis is dynamic in the role. His character has some of the most important and memorable musical numbers. He sings the dazzling song, “Road to Hell,” which opens the show and is reprised in the finale. Most of Kreis’ numbers are reminiscent of New Orleans jazz with a little bit of the historic jazz played at New York’s Apollo thrown in for good measure. (Maryland’s own André De Shields won a Tony for the role.)

The acclaimed Morrow creates a chilling Hades but a Hades that can still love and show some compassion. He leads the company in the haunting number, “Why We Build the Wall,” which sounds very timely with lyrics like “Build the wall to keep us free” and intimates that “they” want to come to the Underworld to take what the workers have, which is really nothing. Hades and Persephone shine in the tender love song, “How Long?”

Marable is a delight. She can do jazz as good as Pearl Bailey and sing a Broadway love song as powerfully as Idina Menzel. She opens Act II with “Our Lady of the Underground,” which had the audience rockin’.

Barasch has an enchanting tenor voice as the vulnerable and smitten Orpheus. He conquers both Eurydice’s heart and the heart of the audience with “Come Home with Me.” He also sings the main theme, ‘Epic I, II and II’ which is the thread of the tale. Orpheus also must play the guitar which Barasch does well.

Green is the perfect Eurydice—both tough and realistic in love. She is a standout whether singing a duet with Orpheus in “Promises,” with the Fates in “Any Way the Wind Blows,” with Hades in “Hey, Little Songbird,” or on her own in “Flowers.”

Three wonderful women play The Fates—Belén Moyano, Bex Odorisio, and Shea Renne—who are the back-up group for many of the songs. They have one of the best numbers of the night, “Nothing Changes,” a wonderful mixture of Patti LaBelle and the Andrew Sisters. Later, they heat things up again in “Word to the Wise.”

The talented chorus called Workers are Lindsey Hailes, Chibueze Ihuoma, Will Mann, Sydney Parra, and Jamari Johnson Williams. I don’t recall the chorus of any musical getting the ovation this group deservedly received. In a musical number called simply “Chant,” they capture the plight of subjugated workers who toil just to survive.

Mitchell’s music is so original that “Hadestown” is comparable to “Jesus Christ Superstar” and “Les Misérables” in its innovation. She utilizes elements of jazz, pop, show tunes, and folk music throughout.

Chavkin’s vision and direction is ingenious. I loved the feeling of Old New Orleans, whether in the set (a balcony right out of the French Quarter) or the costumes that will make you feel like you are on Basin Street. The lights are used to make a statement, sometimes engulfing the audience itself.

Rachel Hauck’s set is a work of art, creating a blend of a New Orleans Jazz Hall (even using the orchestra area to this end) on Basin Street, and the Underground with a huge freight elevator as the entrance. Hauck also has several revolving platforms that work smartly with the choreography, and was rewarded with a Tony for her phenomenal creation.

Michael Krass’ Tony-nominated costumes also help create the feeling of Mardi Gras. I expected to see a New Orleans marching band when Hermes sported an umbrella. The Fates costumes also fit perfectly into that time and place as does Persephone’s dresses. The workers’—and later Eurydice’s—coal miner clothes are also inspired.

The lighting design by Bradley King is so essential to this production it is no wonder he also won a Tony for his work. It is breathtaking at times and very fast-paced—you will feel as if you are swept onto the stage.

Michael Chorney and Todd Sickafoose are credited with the arrangements and orchestration (another Tony win), with Cody Owen Stine as the musical director and David Lai as the music coordinator. Liam Robinson is the music supervisor and also did the vocal arrangements.

With Stine at the piano, the orchestra also received thundering applause for its work, so vital to this production. They are not only scenery, but practically characters in the show.

David Neumann’s Tony-nominated choreography integrates magnificently with the set, especially with the revolving platforms. The miner’s scenes are shear genius.

“Hadestown” is devilishly delicious and will put a fire in your soul.

Running Time: Two hours and 35 minutes with one 15-minute intermission.

Advisory: Recommended for age 8 and up.

Note: To enter the theatres at The Kennedy Center, you will need proof of Covid vaccination or proof of a recent negative Covid-19 PCR test to attend. Masks are required at all times.