Theatre Review: ‘Having Our Say: The Delany Sisters’ First 100 Years’ at Creative Cauldron 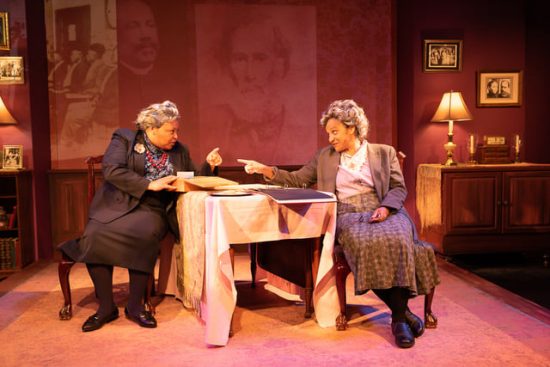 This production is a like a dip in the warmth of late spring. Written by Emily Mann (and adapted from the book by Sarah “Sadie” L. Delany and A. Elizabeth “Bessie” Delany with Amy Hill Hearth), it’s generous in its views, warm, and forgiving. It is still tart in straight-talk about living with the aftermath of slavery through Jim Crow and onwards through the on-going systemic inequality faced by Black people.

I would advise everyone who wants an evening of good theatre delivered by two indomitable actors to get tickets for ‘Having Our Say’ now.

The Delany sisters come from a strong, close-knit, large, and remarkably long-lived family. Sadie (Lisa Hill Corley) and Bessie (Ayesis Clay) never married and pretty  much lived together all of their lives. Bessie is the extrovert, the marcher, and more pugnacious in her outspokeness against discrimination. Sadie is the self-confessed mama’s girl (her shadow, her mother used to call her), an introvert, and preferred a more gentle approach to instigating change. It is remarkable how the two sisters respected each other’s differences and saw the value in each other’s way of operating in the world. Given the times we live in now, I wish that lesson could be bottled and sold.

Throughout the show, Sadie and Bessie take us on a journey from before they were born to the 1990s. They both went to college and earned degrees. Bessie earned a Doctor of Dental Surgery degree from Columbia University in New York City in 1923 and became the second Black woman licensed to practice in the state of New York. Sadie was a teacher and the first Black permitted to teach domestic science at the high-school level in the New York public schools—and to white students. Both sisters were proud of their achievements but humble, giving much of the credit to their parents and God.

The way the play is constructed, the sisters are preparing a birthday dinner of their deceased father’s favorite foods, as they do every year to honor his memory. At the opening on Saturday, Creative Cauldron hosted a reception after the show, with the chicken, gravy, biscuits, and some of the other food. It was a gracious tribute.

The play itself is well-written. It moves forward briskly (after all, 100 years of life in the Delany family is covered in 90 minutes) and weaves in lot of history in a chatty, natural manner. It’s fascinating. Equally fascinating is the sisters’ secret to their longevity—they never married. It’s a well-known line and still belly-laugh funny.

As the sisters, Clay and Corley are impeccable. Their timing, the gestures, the sense of long familiarity, and the unobtrusive way they help each other physically when needed speaks of authenticity. Director Bryanda Minix obviously has respect for the material and the legacy of the Delany sisters. She also keeps the pace steady and the delivery uncluttered. It’s a joy to watch these two actors take this material and bring it to sparkling life.

The stage is also uncluttered. There’s a big dining table, a few chairs and, off to the side, a chest where photo albums and family treasures are stored. Family photos grace the walls. During parts of their reminiscing, projections on the back wall highlight the various time periods and some of the now-historical actors on the national stage. It’s handled well, as if we were seeing what the Delany sisters see in their minds’ eyes.

This is a lovely, low-key and entirely relevant to 2021 production. I would advise everyone who wants an evening of good theatre delivered by two indomitable actors to get tickets for “Having Our Say” now.