Theatre Review: ‘My Lord, What a Night’ at Ford’s Theatre 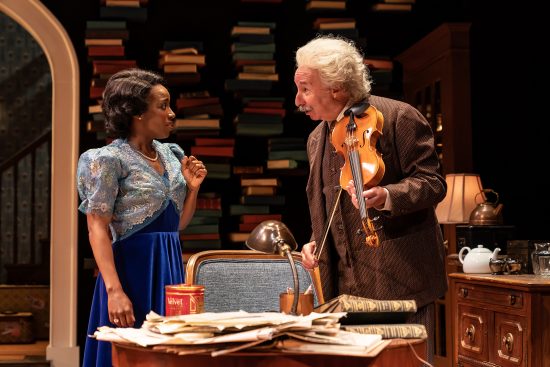 Felicia Curry as Marian Anderson and Christopher Bloch as Albert Einstein in the Ford’s Theatre production of Deborah Brevoort’s “My Lord, What a Night.” Photo by Scott Suchman.

In 1937, world-renowned opera singer Marian Anderson was denied a hotel room in Princeton, NJ on the basis of race. Albert Einstein, a social justice activist and admirer of Miss Anderson, offered her a room in his home instead. The beginning of this real-life friendship between Einstein and Anderson inspires “My Lord, What a Night,” currently playing at Ford’s Theatre. The play speculates on what pivotal discussions and decisions might have filled Einstein’s living room, weaving the Einstein-Szilard letter to FDR on the possibility of a German nuclear weapon and Marian Anderson’s famed performance on the steps of the Lincoln Memorial into a couple of days in Princeton.

…provides a thought-provoking window into history and a reminder that even well-intentioned and intelligent people may disagree on the right response to social injustice.

Although framed around these momentous pieces of history, the show by playwright Deborah Brevoort may float closer to historical fiction than reenactment. Minor inaccuracies—like the anachronism of mentioning in 1937 the election by Princeton freshmen of Adolf Hitler as the greatest living being in 1939 or the dramatic certainty with which Einstein forecasts the future development and use of nuclear weapons—can be forgiven in light of an overall well-paced script.

Albert Einstein (Christopher Bloch), immediately recognizable by his shock of disheveled white hair (designed by Danna Rosedahl), is disarmingly self-deprecating and charming as he welcomes Marian Anderson (Felicia Curry) to his home. Marian, clearly shaken by the cruel indignity she had recently faced and sumptuously draped in a luminous blue gown (created by costume designer by Karen Perry), carries herself with poise and elegance—a quiet counterbalance to Albert’s animated energy. Bonding over Swiss chocolate, hot tea, and the power of music, a kinship grows between this odd couple.

When Abraham Flexner (Michael Russotto), founder of Princeton University’s Institute for Advanced Study, and Mary Church Terrell (Franchelle Stewart Dorn), first president of the National Association of Colored Women, knock on Albert’s door, eager to weigh in on what they believe Marian should do next, the evening is set for lively discussion. With the aid of projection design by Clint Allen, time-jumps, marked with newspaper headlines highlighting major events including the Hindenburg disaster and Kristallnacht, reunite the group in 1939, with the world on the cusp of WWII.

With papers and notes strewn across the floor and furniture, and endless stacks of books floating on the walls, Meghan Raham’s scenic design illustrates that Einstein’s intellectual life is never off-stage. Yet, while society will not soon forget Einstein the academic, it’s the less-remembered Albert the advocate and radical we meet in “My Lord, What a Night.” The tension simmers between the strident Mary and Albert, who both believe injustice should be forced to light and called out, and the backlash-cautious Marian and Abraham, who are burned by the humiliations of prejudice and hope to advance their peoples’ well-being within the strictures of their own professional success.

First commissioned by the 2015/2016 Liberty Live Commission which funds new plays about New Jersey history, “My Lord, What a Night” is occasionally heavy-handed in debates of human rights and political action. While Marian’s reticence to make a public statement is sympathetic, especially in light of her real-life legacy as a trailblazing black artist, Abraham’s preoccupation with pacifying university donors and protecting his own power and position veers uncomfortably into anti-semitic stereotype. Moreover, at the climax of the play, sudden changes of heart push credulity—it seems only in theatre do political beliefs dramatically shift in a single conversation. Luckily, smooth direction from Ford’s Senior Artistic Advisor Sheldon Epps carries the audience through these precarious moments.

“My Lord, What a Night” provides a thought-provoking window into history and a reminder that even well-intentioned and intelligent people may disagree on the right response to social injustice. In a brisk and unexpectedly humorous single act, the audience is taken from that first evening in Princeton to the culminating performance on the Lincoln Memorial. This October, peek into the past and speculate on what consequential conversations may have happened behind closed doors at Ford’s “My Lord, What a Night”

Running time: 100 minutes with no intermission.

“My Lord, What a Night” runs in-person through October 24, 2021 at Ford’s Theatre, 511 10th St. NW, Washington, DC 20004. It will be available for on-demand streaming through Broadway On Demand from October 11th through November 4th, 2021. In-person tickets are available here. Click here for Ford’s Covid-19 Health and Safety protocols.