Theatre Review: ‘The Beatle Club’ at Providence Players of Fairfax 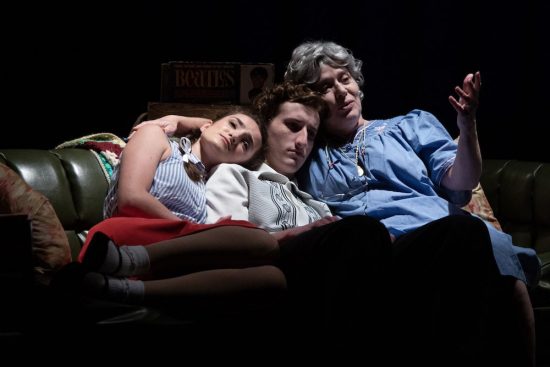 The Providence Players of Fairfax are presenting “The Beatle Club,” a world premiere by Teresa Sullivan, for their first, back-in-person show of the season. It’s a very family-appropriate and gentle exploration of accepting change and the importance of family and friends to finding one’s way through life’s vicissitudes.

This is a family-friendly show…that believes in happy endings.

Mary O’Shea (Sophia Manicone) has started a Beatles’ fan club. She has declared herself president and her friends Karen (Han Nguyen), David (Caden Mitchell), and Eddie (Joe Neff) are the other members and the officers. Actually, Eddie is the club’s mascot, responsible for providing the snacks for the club’s meetings. He filches them from the nuns at the local Catholic school where all the kids go when he helps them carry in and put away their groceries.

Mary lives with her father, Patrick (Bill Bodie), her just-turned-18 brother, Rory (Mike Sansky), and her Granny (Jewel Schrader Orem). Granny’s forgetfulness is worsening, Rory has just gotten his draft notice (the play is set in the weeks before the Beatles played Shea Stadium in 1965), and Patrick, a widower, is trying to find a way to keep the family going without Granny getting lost or burning down the house.

Mary doesn’t lack for confidence. She is convinced that the letter-writing campaign she initiates will get the four friends tickets to see the Beatles at Shea, and even get picked up in a limousine and driven in style with the Beatles in the car. She’s convinced that they will accept her invitation to stay at her family’s house in Teaneck, New Jersey. Mary is very sheltered and naive.

The playwright throws in many of the big themes of the era—fear of Communists, the Vietnam War, the ever-present memory of and awareness of The Troubles in Ireland (Granny lost her husband Connor to them), the changing social contract, and—a less obvious theme but still running in the background—the lack of available care for older people with Alzheimer’s or dementia.

There are probably too many big themes for this play. We never get beyond the surface on any of them. Sullivan does please audiences with a happily-ever-after ending. However, The way Rory resolves the tension between his love of a life living on the water and his anger at being conscripted into a war few understood is really brilliant. One other quibble. In 1965, no Catholic school uniform skirt would have been allowed above the knees (I should know. I was in Catholic school and we had them checked).

There are some standouts among the cast, all of whom do an admirable job, particularly the four youngsters, Manicone, Mitchell, Nguyen, and Neff. As the Mascot Eddie, Neff displays an uncanny sense of the absurd and comic timing. He’s funny just bounding across the stage, as if his growing body is too much for him to know what to do with it. Sarisky’s Rory does a lovely job as a young man trying to find his place in the world while working to find a way to keep ties to his family. He balances this beautifully in a part that could easily have been overplayed. Orem and Bodie make it look easy. These are a parent and a grandparent who still live with the reverberations of conflicts from long ago.

Michael Donahue directs the play in a straightforward manner. Aside from the length of the uniform skirts, costume designer Eileen Copas has chosen outfits that reflect the suburban aesthetics of the mid-1960s. Granny’s house dresses will bring back memories of that fusty, but very utilitarian, garment before women widely wore pants in society. The two dresses that Manicone and Nguyen wear to go to the concert (that’s part of the happily-ever-after ending) are beautiful and perfect for their ages and the times.

Music designer John Smith gives us a range of the hits from back then—the Beatles and others. You could see feet tapping in the audience. Media projections designer Joe Dzikiewicz’s work is seamlessly inserted into the action to add context but are not distracting. John Coscia has designed and constructed a set that looks to be set in amber. It really does look like the kitchen and basement “rec room” of a suburban split foyer or split level.

This is a family-friendly show, even with some salty language (between father and son, so it fits the old lion-young lion trope) that believes in happy endings. It’s a comforting show in that regard. No fireworks, but it is a nostalgic piece that this group of actors makes believable.

Running Time: Approximately one hour and 50 minutes with one ten-minute intermission.