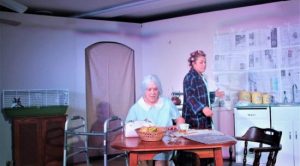 We currently live in a world where entertainment is at our fingertips at any given moment. Whether it’s delivered through a streaming app on a phone or played on television, a movie or show is never too far away from our access. While I love a good movie as much as anyone, it will never have the ability to engage the emotions of its audience as a well-executed piece of live theatre. I had this experience while previewing New Direction Community Theater’s (NDCT) newest production, “The Effects of Gamma Rays on Man-in-the-Moon Marigolds.”

With most shows, I typically feel like an observer. With this production, I felt part of the narrative because of how intensely it made me feel the different emotions… a refreshingly authentic production…

This Pulitzer prize-winning play was originally produced in 1964, and later went on to have other iterations Off-Broadway in 1970 and as a movie in 1972. Both were awarded for their efforts, and rightfully so. This play depicts what at first seems a simple story—a young girl named Tillie (Cassie Cornelius) has entered a science fair at her school where she plans to show the effects of gamma radiation on man-in-the-moon marigolds. However, while she is conducting her experiments, the audience is shown a window into her tumultuous home life with an emotionally abusive mother, Beatrice, and a mentally anguished older sister, Ruth (Amanda Connelley). While this play doesn’t spin a complicated epic, the story it chooses to tell is one that, I fear, may never lose its relevancy.

Director Didi Olney’s (also the artistic director of NDCT) dedication to the production is evident in its creative execution. Instead of gently coaxing the audience to invest themselves in the lives of the three women, she immediately immerses the audience into their world. The unique seating arrangement of this show serves her intent well. There are only three rows of seats, so there is no room to hide from the raw energy of the actors in this heartfelt and painful story. With most shows, I typically feel like an observer. With this production, I felt part of the narrative because of how deeply it made me feel the different emotions. Olney achieves this through judicious moments of intense audio and the artistic choice to use live rabbit for the majority of the play instead of opting for a ceramic prop. If this play is any indication of Olney’s talent as a director, I welcome any future productions that she helms.

While all five of the actresses worked as a harmonious unit, two in particular helped give this production the visceral gut punch it needed—Kate Harrison as Beatrice Hunsdorfer and Danna Blais as Nanny. Harrison created a depth to her character that was genuinely intriguing. It would have been incredibly easy to make her into a one-note monster and not difficult to do when abuse is involved. However, Harrison dives deeper and paints a woman who didn’t embark on motherhood with the intent to become the selfish, abusive person that she is. We sense that Beatrice doesn’t believe she is a monster. There are also glimmers that reveal her humanity beneath her cruelty. Blais plays an older woman who very clearly has dementia. She masters the vacant stares, ticks, and walking style of a dementia patient and was utterly convincing until the curtain call. Although she doesn’t have a single line of dialogue, I caught myself frequently watching her character throughout the production.

My favorite technical aspect of this show, as is the case with most productions at NDCT, was the set designed by Didi Olney and Logan Patton. The levels were expertly balanced with a living room on one side of the set and a kitchen with a table on the other. Before the show began, there were little clues to the story—a purse left on the table, a crooked painting, and a bottle of whiskey. I love it when a set starts the wheels turning before a single actor even steps onto the stage. Additionally, NDCT has recently upgraded their lighting rig which benefitted this production. The gradual increase in the intensity of the lighting at the beginning of each new scene allowed for a more gentle acclimation to the setting.

This is a refreshingly authentic production for those who want to have a truly intense and visceral experience that gets them thinking about the nuances of human relationships. “Marigolds” unapologetically delves into the play with impressive passion that is a delight in Southern Maryland community theatre. I would caution anyone from seeing this show if they have any unprocessed trauma from abuse as the play does not shy away from the emotional damage that can occur in such situations.